Catholic art can be more than stained glass and saint statues 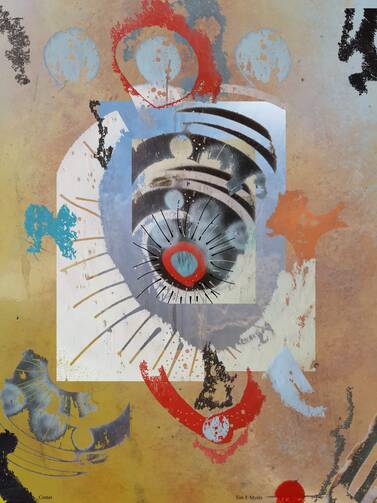 While growing up amid a mainstream American childhood of cartoons, cereal boxes and kid-friendly illustrations in school readers, I also knew crucifixes, saint statues, a living-room portrait of Mary I unconsciously associated with my own mother, and the luminous stained-glass figures in my high school’s church. I grew up immersed in Catholic art.

For years, though, virtually the only sacred art I experienced was traditional. That art helped illuminate my spirit; I love it still. But as an artist myself I usually work in modernist ways. Some might see this as a rejection of the traditional. It is actually the opposite.

Part of the greatness of the church is its long delight in and encouragement of the arts. It is reflective of a core belief in the essential goodness of creation. Nevertheless, throughout its history, some clergy sought to restrict the full expressiveness artists naturally require. Bernard of Clairvaux, for example, castigated Abbot Suger for, of all things, Gothic architecture. And Catholic prelates invented the use of fig leaves in place of statuary genitals. In more recent times, superb artist-priests like Gerard Manley Hopkins and Thomas Merton were pressured to end their creative work by superiors who saw their art as a selfish threat to spiritual commitment.

The church's delight in the arts is reflective of a core belief in the essential goodness of creation.

But innovations in spiritual art are often new manifestations of the transcendent. Even as an immature high-school student, I found spirituality in, for example, in rock ‘n’ roll. It opened me up and out, as I hung over my little white plastic record player listening to “Turn, Turn, Turn” by the Byrds, (Pete Seeger’s recasting of Ecclesiastes), Bob Dylan’s “A Hard Rain’s a-Gonna Fall” (which felt to me like a dark but ultimately positive twist on the Prodigal Son), and many others. My parents didn’t like those records—at all. I breathed them in.

My experience of art is affirmed by, of all things, the Third Council of Constantinople in 681 C.E.:

For by so much more frequently as they [sacred things] are
seen in artistic representation, by so much more readily are
men lifted up to the memory of their prototypes, and to a
longing after them…

Now there is ancient language that reverberates in my contemporary heart.

My embrace of modernism has nothing to do with novelty, and it is as theological as it is artistic.

It is out of that reverberation, in fact, that I have sought non-traditional forms of expression. My embrace of modernism has nothing to do with novelty or a mere “keeping up with the times.” And it is as theological as it is artistic. An artist always pursues that which can grip viewers in a profound way. But he or she also understands that the best art fuses form and content. Spiritual thinking is at the heart of what I create. I have found, for example, that even when doodling during a meeting, I am continually pulled—almost unconsciously—to the figure of a rayed sun beaming itself out intensely in every direction.

If that is not a spiritual image, I don’t know what is.

One theological principle particularly compels me. The traditional attributes of God include his being infinite. The implications of an infinite God is that he is both personal and impersonal, static and kinetic, male and female, immutable and ever-changing—and fundamentally mysterious. Who are we to say otherwise, to restrict the nature of a transcendent being? For me, some crucial things follow on this.

God is both personal and impersonal, static and kinetic, male and female, immutable and ever-changing.

Modernism arose mainly because artists continually seek means to create compelling work. They are ever in search of new forms to bear their images and ideas. But this is even more challenging in sacred art. I seek the spiritually potent image, and for that I must be very open, travel many different lands, so to speak. What could be more natural than renewing faith through expanding on traditional forms, re-imagining spiritual impulses? God is white light, existence a prism. We should rejoice in the sacred variety of colors thereby lavished over the world.

My painting “Center,” for example, bears no explicit identification as religious art. That is by design. Think of Zen koans; you consider “one hand clapping” in order to be jolted out of complacency. We can become complacent in our conception of the divine (we’re only human after all), but it is also deeply human to long for liberation from that complacency for the re-igniting of our faith.

In much of my work I try to do exactly that, reignite faith, and liberate us from our usual ways of seeing God. I have been doing so ever since I first learned a little theology as an undergrad at Creighton University, including from a Jesuit who introduced us to J. B. Phillips’s Your God Is Too Small and the “ground of being” God in Bishop John A. T. Robinson’s Honest to God. When I later went through an intense spiritual crisis, these books, I came to realize, had laid the groundwork for the resolution of that crisis. What was old was made new, and I could live because of it.

We can become complacent in our conception of the divine.

Doesn’t everyone sense, consciously or otherwise, some warm, radiant, benthic, infinite center to all things? I think of Kong Qiu, better known as Confucius: “At the summit of being, all see and know the principle of the One.” If I can in some small way evoke this center with a force of freshness and mystery, one that neither spells itself out or demands specific theological reactions—then I’m satisfied. Of course my image is utterly insufficient. But if it leads to an unease, a sudden shifting out of balance, if the viewer simply glimpses some dark, incandescent essence, then he or she may be set on the spiritual path, or moved further along it. I consider that a sacred result.

Looking for God while moving into a new house that doesn't feel like home
Tim J. Myers

Some people are endlessly nurtured by traditional art, and do not need any art-borne expansiveness. Good for them. But even traditionalists often feel their hearts beat faster at a new presentation. And after all, even the most traditional forms were new at some point. Imagine how it felt in 1144 C.E. to gaze on Suger’s newly-completed church at St. Denis, reveling in the soaring qualities of Gothic design, basking in the soul-warming colors of those windows. All that was “modernist” back then—because 12th-century artists of the sacred also sought that which was fresh and compelling, wherever they found it.

For all its seeming strangeness, modernist sacred art usually does something quite traditional: It leads us to contemplation of the Divine, and so to the center of our own being. 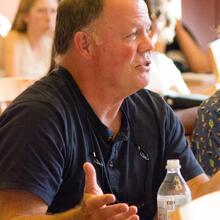 Tim J. Myers
Show Comments ()
Join the conversation: Login or create an account
Before you can comment, you need to update your profile to include your first and last name, as required in our comments policy. Then reload this page and you'll be set up for commenting. Update your profile