Dave Chappelle’s ‘The Closer’: Empathy, Humility and the Lack Thereof 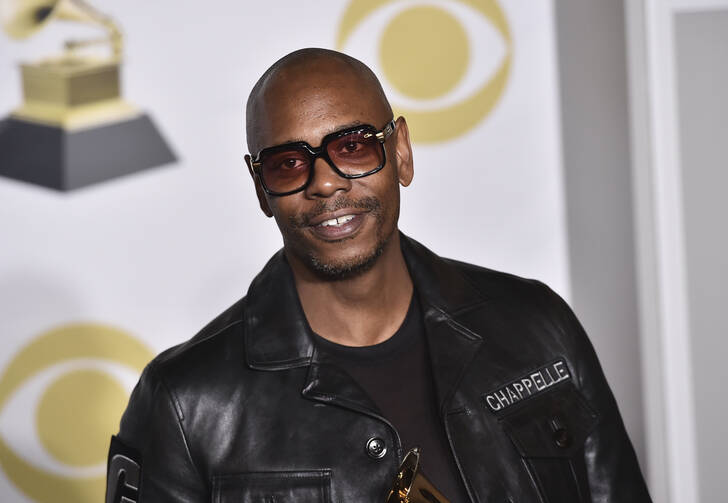 In this Jan. 28, 2018 file photo, Dave Chappelle poses in the press room with the best comedy album award for "The Age of Spin" and "Deep in the Heart of Texas" at the 60th annual Grammy Awards in New York. (Photo by Charles Sykes/Invision/AP, File)

Earlier this month Netflix released “The Closer,” comedian Dave Chappelle’s final of six connected Netflix specials. It was met with considerable outrage—including within Netflix, where dozens of employees staged a walkout last week—as Chappelle used the show to simultaneously question whether trans women were really women and attack the queer community for criticizing him and others. “In our country you can shoot and kill a [Black person],” he says early in the hourlong set. “But you better not hurt a gay person’s feelings.”

What is surprising about the special is not that Chappelle tells offensive jokes that denigrate queer people, particularly those who are transgender. He has been doing that for years (and I find it appalling). No, what turned my head was his broader point, which, believe it or not, was that we need to have more empathy for one another.

Chappelle spends the last 15 minutes of the special telling the story of his friendship with a trans woman named Daphne Dorman, an aspiring comedian who loved his comedy and defended him after his 2019 special “Sticks & Stones” compared being trans to being Black and thinking you were Chinese on the inside, among other things. (Dorman died by suicide in 2019, and her sisters have defended Chappelle against accusations of transphobia.)

“Punching down on someone requires you to think less of them,” Chappelle quotes Dorman as having written of him online. “And I know him, and he doesn’t. He doesn’t punch up, he doesn’t punch down. He punches lines, and he’s a master of his craft.”

I find his concept of empathy worth considering, both for what it includes and misses.

First, a bit of context for those who haven’t seen the special. “The Closer” is organized around a series of stories of Chappelle being accosted by queer people. In almost all of them, Chappelle never lays out specifically what these people said to him. The content of their criticism is treated as less important than the fact that queer people are attacking him. Transgender people “want me dead,” Chappelle says at one point. “I’ve gone too far. I’ve said too much.”

I find Dave Chappelle’s concept of empathy for transgender people worth considering — both for what it includes and misses.

In reality, the content of their criticism is essential. Queer people challenge Chappelle because the words of a talented storyteller who is on streaming platform that reaches over 200 million people worldwide has actual impact on their lives. According to the Human Rights Campaign, 2020 saw more transgender and gender-nonconforming Americans murdered than in any year since they began keeping track in 2013. And there are many more such troubling statistics.

Having mostly erased the voices of his critics, in the last section of his special Chappelle allows his queer friend Dornan the special’s sole moment of brutal honesty. At the end of a show in San Francisco where Chappelle peppered Dornan with questions about being trans, Chappelle quipped, “I love you to death, but I have no [expletive] idea what you’re talking about.”

It’s clearly intended as a sort of toss-off joke to close things out. But according to Chappelle, Dornan didn’t laugh. “Now she looks at me like I’m not her friend anymore,” he describes. “She looks at me like I’m something bigger than me, like I’m the whole [expletive] world in a guy. And she says, ‘I don’t need you to understand me. I just need you to believe that I’m having a human experience.’”

Herein lies the core to his understanding of empathy, the idea that people should be allowed to speak their truth, even if it is confronting or ignorant.

Chappelle respects her for being so direct. “I believe you,” he responds to her, “because it takes one to know one.” And herein lies the core to his understanding of empathy, the idea that people should be allowed to speak their truth, even if it is confronting or ignorant, and that in such honest conversation both parties discover their common humanity.

But his response to her, as powerful as it sounds, also encapsulates a problem in so many conversations around empathy, namely that they are really still focused on the person “doing” the empathy, rather than the person who needs to be heard. Hearing that Dornan has just said Chappelle’s understanding is irrelevant, Chappelle still thinks her truth is in some way dependent on him—his belief, his experience.

Dornan is a human being no matter what he believes or whether he can personally relate to her. While empathy hopefully helps us to understand and appreciate the life of another, it is not a function of our ability to identify with them. In fact, many times it requires a leap of faith away from our own experience.

While empathy hopefully helps us to understand and appreciate the life of another, it is not a function of our ability to identify with them.

The idea that empathy involves allowing yourself to be confronted with a truth that is hard or confusing—whether that consists of information that someone shares or the reality of the pain that they are in—is a great insight. But real empathy is not that moment of revelation but the effect of it, the crumbling away of all the stories and resources we put in place to reassure ourselves that we are central, knowledgeable and in the right. It is the apostle Thomas proclaiming “My Lord and My God!” after he has put his finger in Christ’s side, a shattering of one’s illusions that leads to a humility which no longer needs to be convinced of anything and absolutely does not have to go both ways, nor “take one to know one.”

The Catholic Church in the United States has been wrestling internally with the question of how it considers and treats transgender people in recent months. Some bishops have opted for an approach in some ways similar to Chappelle’s, describing transgender identity as a “claim” or “ideology” that is not real and gender dysphoria as a cross to be born akin to multiple sclerosis or the aftereffects of a stroke.

While Pope Francis has spoken about the need to accompany transgender people and invited a transgender group to the Vatican last Easter weekend, he has also warned against the dangers of a “gender theory” that seeks to abolish the difference between sexes.

Others have called on Catholics and others, in the words of one letter co-authored by Catholic leaders and the Human Rights Campaign, “to respect the full dignity and humanity” in trans people. In words that almost seem meant for Chappelle, this group of Catholic leaders noted, “That we might not understand an individual’s experience, does not mean we are to discriminate against them, nor tolerate any form of discrimination they might endure.”

In the days following the Chappelle special, an ongoing battle also broke out on Twitter about whether you can be Catholic and trans. Among the responses were comments by trans people, including this one from a trans man about how he explains being trans and a person of faith to his mom.

This actually is the quote that made my mum able to understand how trans people could fit in with her faith, and as a catholic trans guy it makes me a bit emotional sometimes https://t.co/qN0mI98Tpx

I don’t know about you, but I have never heard that point of view before. It is a radical take on creation, an invitation to see sacrament and holiness precisely in the unfinished. Our challenges and struggles become part of God’s blessing to us.

If we shut up and listen to trans people, instead of arguing about them or making jokes at their expense, there is much we can learn.