A message after the beep

Bev! Listen—I’ve got summat to say.
By the way, I’m done here
and it’s been worse than sad. Horrendous.
Chapel packed, but crap. No proper plan,
no format. Not even a whip-round for that
place he detoxed in, or Free Palestine,
summat important to Martin.
No songs, no vicar, but why no humanist?
Just his brother, pissed. Pathetic.
Then we’re outside, course it’s raining isn’t it
and I put up the brolly I bought changing trains at Birmingham
but it’s flaming broken—you feel bloody silly
if a spoke’s gone when you’ve a smart suit on—
and we’re knee-deep in mud and staring at a coffin
wi’ nowt on it, coz the brother’s card said no flowers,
it actually said Merry Christmas, the funeral was a Post-It Note.
Then Adrian who found him       the lad who actually found him
why did it take nine days?     But he can’t talk for crying
so nothing important gets said about      who Martin was
that he was...
And worse: The pub! Shut! No wake!
They hadn’t even ordered in a plate of open bloody sandwiches
godssake, so everybody sets off through the streets
seeking another hostelry, but rain’s
coming down in sheets and I’m soaked
and no-one speaks to me and then thank christ
a taxi comes along so I’m back at the Jury’s Inn.
No way was that the send-off he deserved.
It’s been shocking. Grim is the word. Because no-one
really knew him, although it was packed, folk asking why? Why?
No-one should leave this planet wi’ nowt said.
No proper eulogy, no facts. No-one
stood up, nobody just stood up and…
Bev, shall we get wed?
Helluva day, suit jacket sopping, this god-awful room’s
got no heater in it, he should’ve had a Guardian obit,
he was a hundred percent. So how about it?
How come he had a gun, anyway?
Let’s move. Let’s buy a camper van and
move somewhere, Orkney, an island,
somewhere tight-knit, have kids

coz everything he didn’t have was why.

And this tie’s ruined. 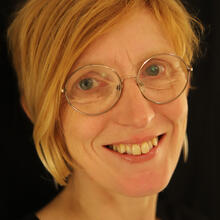 Susan Vickerman
Provide feedback on this article
Join the conversation: Login or create an account
Before you can comment, you need to update your profile to include your first and last name, as required in our comments policy. Then reload this page and you'll be set up for commenting. Update your profile