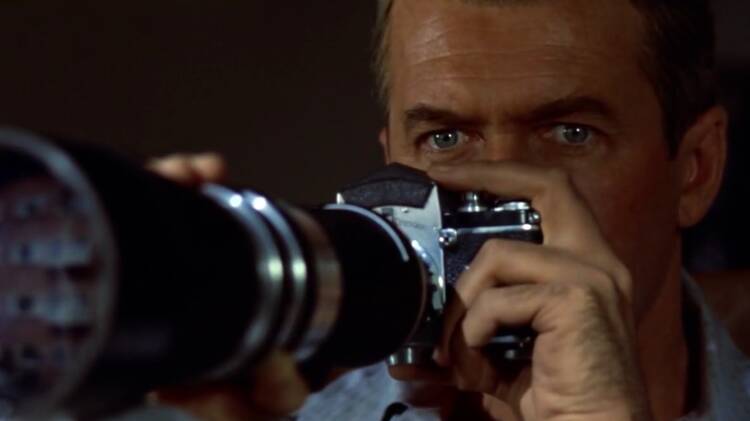 L. B. Jeffries, whom most people call simply “Jeff,” is sitting in his apartment, staring out the window with a pair of binoculars, watching everything his neighbors are doing. He has taken to this habit ever since he broke his leg and has been stuck indoors in a wheelchair for the better part of two months. His only company is his girlfriend, played by Grace Kelly, whom he keeps neglecting to marry, and his nurse, whose well-worn wisdom is starting to become irritating. Jeff, played by Jimmy Stewart, is looking forward to getting rid of the cast from his leg and finally re-entering the world. But then, one sleepless night, he is pretty sure he sees his neighbor murder his wife.

We can all relate, right?

Alfred Hitchcock’s “Rear Window,” released in 1954, is many things: murder mystery, technical marvel, emblematic of a Hollywood at its most glamorous. But Hitchcock could never have predicted that, one day, we were all going to end up like Jeff: engaging in voyeuristic behaviors so we could stave off the boredom and paranoia of living our entire lives within our homes. It is an eerie film in normal times, but the anxiety of watching it increased by a thousandfold during the pandemic.

We are all like Jeff: engaging in voyeuristic behaviors to stave off the boredom and paranoia of living our entire lives within our homes.

It was also the first film that I saw back in a theater.

After I became fully vaccinated, a friend invited me to go see “Rear Window” at Film Forum in Lower Manhattan. In the theater everyone was masked up and socially distanced, as per city guidelines. What might have just been a simple way to get back into the habit of watching movies in the cinema turned into a quite surreal experience; especially as the entire audience slowly realized that we were watching our own distorted reality unfold on screen.

Stella, Jeff’s physical therapy nurse, chastises him for his voyeuristic behavior early in the film. “We’ve grown to be a race of peeping Toms!” she declares. “What people should do is stand outside their own houses and look in once in a while. What do you think of that for homespun philosophy?”

That line struck me, and it clearly struck many others too, because more than a few audience members chuckled uncomfortably at the line. “We’ve grown to be a race of peeping Toms.” My friend and I are both in our early 20s and active on social media. We realized that, with all the time we spent on our phones, we were becoming like Jeff. And it was not just us; it was everyone. We have all been cooped up in our homes, staring through the windows of our phone screens, voyeuristically consuming all the false realities we see online. We had to leave our homes to understand this.

“We’ve grown to be a race of peeping Toms!”

Going to a movie theater again was like a shock to the system. I love movies. Movies are my lifeblood. I saw my very first movie, Disney’s “Tarzan,” at the age of 2; and though I have no recollection of this event, my parents tell me that it hooked me on the medium for life. My entire childhood was filled with the likes of Steven Spielberg, Robert Zemeckis, George Lucas, Ron Howard and others. I used to schedule my entire life around film releases before the pandemic put a stop to them. Returning to the way things were, the feeling was magical. I had forgotten, honestly forgotten, how much I loved the feeling of the soft leather seats, leaning back to see the entirety of the massive screen, hearing the reactions of the others in the movie theater to all the jokes and twists and surprises.

And going to the movies doesn’t just mean the literal experience of watching a film at a cinema. It also means grabbing a quick cannoli before getting to the movie house and catching up on what you have been up to since the last time you saw your friend. It means bantering during the previews about whether this or that movie is going to be any good. It means going to dinner afterward and sipping red wine as you discuss the movie and sort out how you feel about it.

I used to schedule my entire life around film releases. Returning to the way things were, the feeling was magical.

It was during that post-film meal that my friend and I realized just how much more voyeuristic we had become and how much of our lives we had been living virtually. And, to be sure, none of us have really had the opportunity to do much else besides that. It has not been safe to do otherwise. Thanks to the pandemic, we have all been stuck with metaphorical broken legs.

Not all of us get the opportunity to be like Jeff, who ends up solving a murder while stuck indoors, and it is hard to feel particularly heroic when you are working from home in your pajamas. But the film offers a grave warning against becoming too comfortable with our current reality. Jeff’s paranoid voyeurism may have turned out to be justified, but that horrible reality is not one that most of us will ever need to contend with. We must abandon our false realities, the ones on our laptops and phones.

The film offers a grave warning against becoming too comfortable with our current reality.

As the film suggests, it is in our best interest—once we are fully vaccinated—to step out of the confines of our homes and see the world once again. There may be a temptation to stay indoors, but we must push past it. There is great beauty to being in the world instead of simply observing it.

Every moment I spent outside after receiving my vaccination was a blessing. Everything I did was far more spiritually enriching and physically stimulating than the languishing I’d been practicing for far too many months. So, as it turns out, watching a film about being stuck in your apartment was just the cure-all I needed to make sure that I did not suffer the same fate as its paranoiac protagonist.

Watch “Rear Window” and you’ll see exactly what I mean.