No bells tolled the death of Metaphor,
which happened—witnesses say—when
hammer met nail at Calvary.
They saw him (Metaphor) swoon and close
his eyes;
finding no mate in all creation,
seeing himself in no reality,
he vanished, embodying nothing,
when the Nazorean died.

If Metaphor had lived,
I might have, too.
Might have grown grey by the hearth,
arms full of progeny;
might have laid down in my plot
at the elbows of ancestors,
dusting decades from my shoulders,
settling to sleep.

If Metaphor had held through Crucifixion,
I, too, would have had my eighty years,
would have smiled in startling ignorance
of swords,
eaten my fill of approximate truths,
evaded mobs and monsters.

But if it had lived—
then Death would not have died;
I would have shrunk, unpersecuted wretch,
decades crushed beneath an empty infinite.
If nails were real, and iron, fire real,
Death too strong to be tamed by rhetoric—
then light, tomb, dawn were real,
and Death a dead reality—
and peace no longer simile. 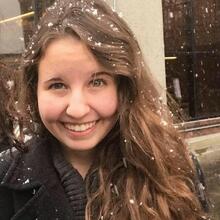 Mary Callistas is the pen name of a middle school English teacher and graduate of a Jesuit university.