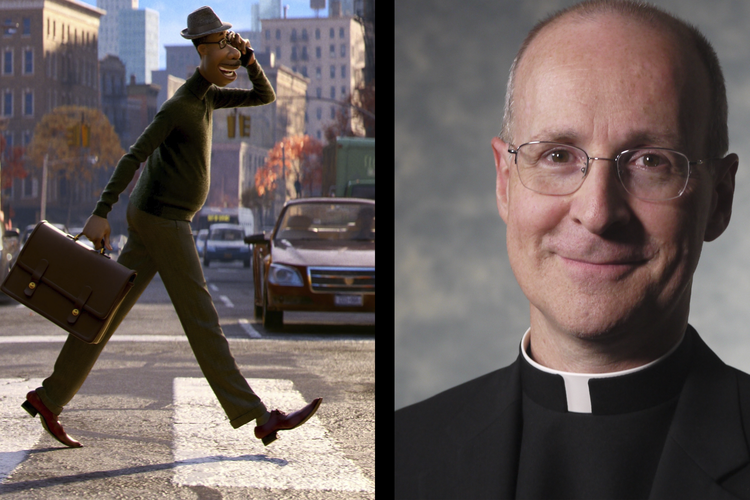 Recently, Fordham University’s Center on Religion and Culture hosted a virtual conversation between Pete Docter of Pixar and James Martin, S.J., of America Media. Mr. Docter, the chief creative officer at Pixar, co-wrote and directed “Soul,” which premiered on Disney+ at Christmas and wrestles with questions of the afterlife.

Mr. Docter grew up Lutheran and is now Presbyterian, and his interest in the questions posed by his own Christian faith led him to research a variety of faith traditions while writing “Soul.” He was particularly inspired by Father Martin’s book The Jesuit Guide to (Almost) Everything, and its insights about Ignatian spirituality greatly influenced the film’s ultimate message.

Their conversation, which can be viewed below, covered everything from Father Martin’s book to the making of the film to Mr. Docter’s own struggles with being a Christian working in film and animation today.

Since he is not Catholic himself, Mr. Docter said he appreciated “how accessible and inspiring and useful” the ideas and explanations in The Jesuit Guide to (Almost) Everything were. He was particularly moved by the idea of “finding God in all things,” which he and Father Martin agreed was present in the film’s reverence and appreciation for the small things that can bring great hope.

Mr. Docter was also inspired by Ignatian concepts of freedom and detachment. His main character, a jazz musician, gets the chance of a lifetime when he plays in a concert with a jazz legend; but, as Mr. Docter described, “he’s still the same guy at the end.” As a writer, Mr. Docter resonated with this notion because of the disappointment he felt when his professional triumphs did not bring him the sense of fulfillment he had anticipated.

Pete Docter was inspired by Father Martin’s book The Jesuit Guide to (Almost) Everything and its insights about Ignatian spirituality.

“I guess somewhere in the back of my head was this idea that I have to earn my way to being loved. That someday, if I do a good enough job, my life will be complete,” he said as he described the “unsettled” feeling he experienced after the overwhelming success of his films, which at the time included “Monsters, Inc.,” “Up” and “Inside Out.”

Father Martin shared a similar experience he had had after publishing his book. As a young Jesuit, he considered writing a book to be the pinnacle of accomplishment. But when he published his own years later, he looked at it sitting on his desk and thought “these material things are not going to be satisfying.”

Also formative were insights in Father Martin’s book derived from his fellow Jesuit and spiritual teacher Anthony De Mello, S.J. Mr. Docter and Father Martin discussed one of Father De Mello’s parables that was included in The Jesuit Guide to (Almost) Everything and was told by one of the characters in “Soul.”

By creating “Soul,” Mr. Docter made a parable of his own, Father Martin suggested.

Father Martin and Mr. Doctor also discussed the ways in which the drive to find success and purpose in American life can distort the Christian notion of vocation. As Mr. Docter put it: “I feel like you’re given a sense of something you’re really good at and passionate for. But I think a lot of us make the mistake that that somehow becomes like self-defining or that there’s something to be achieved. The message of the film is really trying to tease those two things apart…. There’s nothing wrong with wanting to be a jazz musician or a cartoonist or whatever, but that doesn’t have to be the totality of who you are in the world.”

Father Martin added: “If you are what you do, if that’s taken away from you, or if at the end of your life you don’t have an active profession, then you feel like you’re nothing. And I think that’s what’s so hard for some people, especially, you know, if they’re unemployed, or they feel like they’re not sort of successful in the eyes of the world, they don’t feel like they’re valuable.”

Mr. Docter shared his hesitation to openly express his Christian faith for fear of being judged or having his work labeled. But with such a clear depiction of spiritual themes in “Soul,” he said, “this film has sort of forced me to out myself a little bit more, in a good way.”

Mr. Docter said that he had heard from faith leaders of various backgrounds, Christian and non-Christian alike, who said that they saw tenets of their faith in the film. “Either we were so vague that we appeal to everybody, or we found something kind of deeper...at the core of these things,” he said.

Father Martin’s work and the teaching of other spiritual leaders is indeed embedded in the storytelling of “Soul,” both directly and subtly, its themes accessible and thought-provoking for people of all faiths.