Poems for a Pandemic 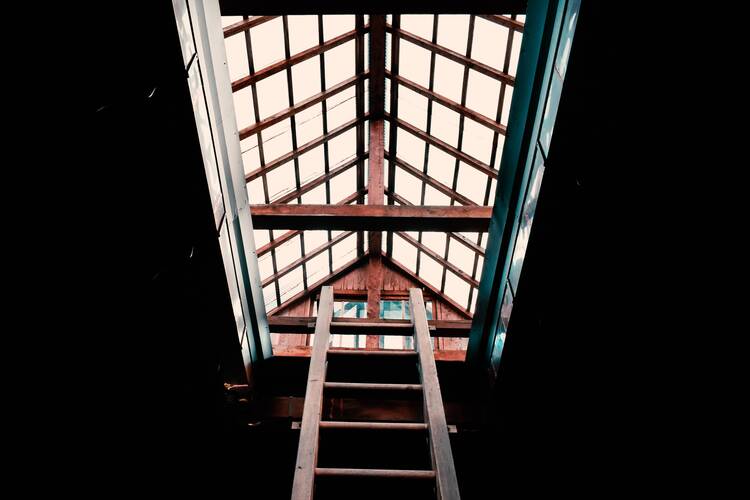 The creation of original works of art often happens in extraordinary times, when we are decentered, upended, thrown off our usual game; when we don’t entirely know what is happening or why it is happening or what is next. And the art itself—any strong piece of art created at any time, really—can be decentering and upending for its audience. Works that traffic in the nonlinear, the flash of images, feelings that glide in and out, barrel straight ahead and then, like some perfect school of fish sensing faint danger, suddenly make a quick turn. This is what grabs our attention and doesn’t turn it loose.

It is not unlike those magazine collages high school students make at a retreat or bible camp: images taken from here and there, incongruous, weirdly juxtaposed. Debbie Gibson pasted in with Winnie Mandela and Sugar Ray Leonard next to a Ford ad—“The next generation of [cut out ‘F-150s,’ insert ‘Studly Leaders’] is here.” Superstars and banal phrases welded into something much more meaningful.

(Debbie Gibson and Sugar Ray are still in magazines, aren’t they?)

Poetry is an attempt to say the unsayable, to name that which cannot fully be named, capture what ultimately eludes. America has solicited poetry for our pandemic, works that scratch out these hints and revelations about what is happening out there. They engage with various aspects of this unreal time from, quite literally, cause to effect. We are grateful to share the fruits of these poets’ work.

And I can only encourage our readers to write some poetry themselves. If nothing else, it is a way to claim some power over a situation in which one can feel so helpless. And if you are worried that your writing won’t be any good, don’t be. Because a) no one else needs to read it, and b), not only does great art come out of times like these, so does, thankfully, bad art. And “bad art,” for my money, is a slippery thing to identify. Perhaps the only truly bad poetry is the poetry that is published solely in the fearful graveyard of someone’s mind because they don’t have the courage or will to actually write it down. So write poetry and rejoice in it, that you have written something at all.
—Joe Hoover, S.J.

Horseshoe Bat
by Dan MacIsaac
This hell-bent thing, Cain’s clawed familiar,
like another plague out of Exodus
carries a baleful load of virus
in its trussed body for sale or barter.

Drawn to the rafters on scissoring wings,
from safe haven, the darkling is clubbed and seized,
a wary collector staying clear
of the flailing brute’s stalactite fangs.

Is there any horror in this skittish thing
except in its unclean capture and killing?
Velveteen fur and clownish muzzle,
webbed wings like a ruptured umbrella,

no hell-flame struck from those matchstick limbs,
these orchid ears heard no infernal drums,
and its teeth caught only beetles and flies
in the pandemonium of the night sky.

Financing the Burials
by Lisa Ampleman
During Holy Week
a city councilman
calls for a relief fund
so his working-class
constituents can afford
to cremate or bury
their dead, the city
currently providing
only its standard $900
and even that only
for legal residents.
He speaks
for those without
a Joseph of
Arimathea
able to step in,
claim the body,
keep their loved one
out of the potter’s
field—a phrase
that began with actual
fields from which
potters removed
all the useful
clay, appropriate for
deeper trenches,
“a burial place for
strangers”—
New York’s longtime
burial for the poor
being an island in
Long Island Sound,
once a prison camp,
now a bird sanctuary.
These 1,700 dead
and counting
(from his Queens
district alone)
might not be wrapped
with fine linens or placed
in a rock-hewn tomb,
but he works
to provide them
their own place.
Bodega clerks, food-
delivery drivers,
caretakers for
the sick: he hopes
to treat justly
in death those who,
he says, are keeping
the city alive.

From This Distance
by Cameron Alexander Lawrence
The shadows on the wall, our close companions,
begin as light—a trespass through trees and glass

before transfiguring the carpeted hall:
in the painting of an open window, the curtains

blow forever toward a sea, unseen over hills,
far from our domestic urgency,

where the southern morning breaks in,
echoing on the surfaces, the sway of pine and sweet gum

—everything we shut out,
even now, with the wind-speckled lake and the reeds
ecstatic as holy rollers,
even as the hospitals and morgues fill and fill,

I’m caught in my longing to be with you
somewhere else, lost in the surge of ten million

beating hearts beneath the tall towers,
uncountable strangers going about their lives,

their warmth separate from ours and not.

(this poem was also published online on April 17)

Quarantine
By Sonja Livingston
My father-in-law is coming to the end.
My husband drives over and stands beneath his bedroom window.