The View From a Cafe in Ethiopia

The View From a Cafe in Ethiopia

Hailemichael, newly blind,
Heads down the street without his cane.
His youngest daughter jogs behind
And tugs him back from the roadside drain.
They turn, as though to look at you,
When a shouting merchant passes through.
He carries posters and blocks our view
With Guido Reni’s Michael.

The angel in this old icon
Trods Satan with a careless stare.
His victory is quickly won,
He has an easy, dapper air.
It’s not for me. My Michael’s hair
Would wear stipples of blood. His bare
Legs shaking in the dying glare
Of the devil’s deathly gaze.

The merchant wanders off. We see
The sightless walker once again.
His face is turned toward you and me.
His daughter takes him by the hand.
And a new icon appears in this
Old man named Power of Michael:
The angel ranged against hubris
Not in triumph nor in struggle,
But in dependence on the grace
Of a daughter in a shadowed space.

This article also appeared in print, under the headline “The View From a Cafe in Ethiopia ,” in the January 20, 2020, issue. 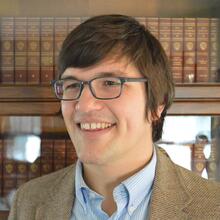 Daniel Luttrull is a doctoral student at Case Western Reserve University in Ohio, where he lives with his wife and children. He has written essays for Christianity and Literature and Front Porch Republic and poetry for First Things.