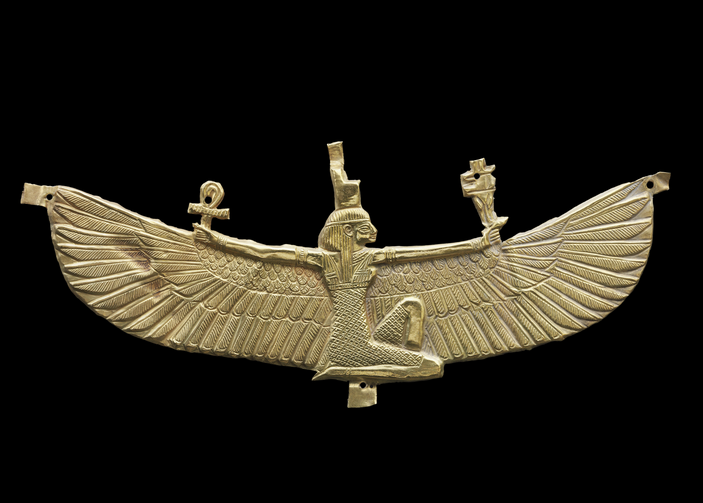 Boston’s Museum of Fine Arts, among America’s greatest art museums and, along with New York’s Metropolitan Museum of Art, the oldest, has many claims to fame. It has outstanding holdings in Egyptian and Impressionist art. Its fine collection of American art has been housed since 2010 in a handsome new wing, “Art of the Americas,” featuring art from both North and South America. Now it is adding to its renown by reclaiming an entire civilization with an exhibition, “Ancient Nubia Now,” that is as politically charged as it is aesthetically stunning. “Nubia?” you ask. Well yes, declares a repentant M.F.A., “Come and see.”

During the years 1913 to 1932, when the Harvard archeologist and M.F.A. curator George A. Reisner led an excavation in southern Egypt and northern Sudan on behalf of the university and the museum, an enormous cache of art—some 25,000 objects—came to the museum (at the time, it was standard practice for the sponsoring institutions to get art from such an excavation). Reisner was an immensely gifted archeologist but his racial and colonialist preconceptions—the region was under British colonial administration—led him to misunderstand entirely what he had discovered. He thought the region, known in antiquity as Kush and by modern scholars as Nubia, was basically an Egyptian outpost. “The [Nubian] native negroid race,” he wrote in a 1918 bulletin for the M.F.A., “had never developed either its trade or any industry worthy of mention, and owed their cultural position to the Egyptian immigrants and to the imported Egyptian civilization.” (The museum itself was all too compliant. Its first dedicated Nubian gallery opened only in 1992 and closed 14 years later.)

“Ancient Nubia Now,” is as politically charged as it is aesthetically stunning.

Organized by M.F.A. curators Denise Doxey, Rita Freed and Lawrence Berman, the superbly installed current exhibition presents some 400 works of art spanning over 2,000 years and four kingdoms that held power in the region. The first of these, Kerma, was an established city by 2400 B.C., became the capital around 1700 B.C. and flourished until 1550 B.C., conducting trade from the Nile Valley into Central Africa and the Red Sea coast. Most of the excavated material comes from burial sites, with offerings that include sculpture, food, beverages, weapons, jewelry, beaded leather clothing and the finest pottery found anywhere in the Nile Valley.

The burial sites were principally at temples near the tombs of Kerma’s kings. A formally exquisite wall inlay of a striding lion in faience would have flanked the entrance to a late temple from the Classic Kerma Period (1700-1550 B.C.). The Nubians buried their elite dead on elegant wooden beds, and the exhibition includes a reproduction of one of them, along with ivory inlays that decorated similar footboards. Items of personal adornment on view often seem strikingly contemporary, and there is also a touching miniature dagger from the tomb of a young boy. Nearby you see Egyptian objects now thought to have been brought home as souvenirs or looted by armies from Kerma as proud tribute: an adorable hippopotamus figurine (1991-1640 B.C.) that might have been a contemporary of the Met’s “William” and several imposing sculptures that include above all one of the great masterpieces of Egyptian sculpture, the over life-size “Lady Sennuwy” (1971-1926 B.C.). The wife of a powerful Egyptian provincial governor, she is carved from granodiorite, seated and facing us frontally, with her left hand in her lap and her right hand holding a lotus blossom (a symbol of rebirth)—stately, serene, a figure of blissful wisdom.

Most of the excavated material comes from burial sites, with offerings that include sculpture, food...and the finest pottery found anywhere in the Nile Valley.

In the mid-16th century B.C., Egypt defeated Kerma’s army, destroyed the capital and ruled over the region for the next 500 years, first occupying northern Nubia and later expanding almost as far south as present-day Khartoum. Forts originally built along the Nile to control gold mines and trade routes began to serve more as administrative stations and religious centers, and the Egyptian god Amen became dominant. But an intermediate gallery in the exhibition suggests that the relations between Egyptians and Nubians were more nuanced than has previously been thought. The Egyptians indeed conducted heavy propaganda against their subjects, but Nubian soldiers served in the Egyptian army, often with distinction; trade in luxury goods thrived up and down the Nile; intermarriage was common; and the Nubians became ardent devotees of Amen. Of particular interest in this respect is a stele (a grave marker) of the Nubian soldier Nenu with his Egyptian wife, Sekhat-Hor, their two children and two dogs, Nenu and the children dressed as Nubians, his wife as an Egyptian (c. 2100-2040 B.C.).

By the early 8th century B.C., the city of Napata had become the capital of a newly assertive Nubia. Under King Piankhy (743-712 B.C.) it conquered Egypt and ruled there under his four successors as the 25th Dynasty. Piankhy had at least three queens (and perhaps several more) and a case in the exhibition displays extraordinary examples of their jewelry, including two pendants with a ram-headed sphinx on a column (in Nubian art, the god Amen takes the form of a ram), a crystal pendant topped by the head of the goddess Hathor and an amulet of the goddess Maat (who embodied the ideal of justice and world order).

A later Napatan king, Senkamanisken (643-623 B.C.), who built extensively at the holy site of Gebel Barkel, comes commandingly to life in a granite gneiss statue. Broad-shouldered and muscular, with a narrow waist, he has wide intent eyes, a fine nose and full lips—the very image of resolution. By contrast, the nearby statue of King Akhenaten (353-340 B.C.), near the end of the Napatan period and long after Nubia’s dominance of Egypt had ended, shows a figure who is full-bodied and compact.

The aesthetic power of the exhibition is so strong that its political implications can escape you.

Other treasures from the Napatan Period include a remarkable trove of funerary figurines known as shawabties (“one who listens,” in ancient Egyptian), especially those from the pyramids of Kings Taharqa (690-664 B.C.) and Senkamanisken. Standing in serried ranks in hieratic poses, they have individualized faces and hieroglyphics cover their outer garments. (In a curatorial coup, this gallery can be seen dimly through a scrim as you enter the exhibition.) Royal tombs at Nuri also yielded exquisite jewelry, such as a winged Isis pectoral in gold that serves as the exhibition’s emblem, elaborately incised canopic jars used to contain internal organs during mummification and the gold and silver “treasure” of King Aspelta (593-568 B.C.). (Not included in the exhibition are two colossal sculptures of Napatan Kings Anlamani (623-593 B.C.) and Aspelta, which are usually on display in an M.F.A. gallery currently closed for a construction project.)

During Egypt’s Greco-Roman period, Nubia’s capital moved south to the city of Meroe, which became one of the great cities of antiquity (332 B.C-364 A.D.). Rome tried, unsuccessfully, to conquer it, and the emperor Augustus in 22 B.C. signed a peace treaty with the Nubian queen Amenirenas. The Roman historian Pliny the Elder later wrote in his Natural History of the importance of the city. But Meroitic script has still not been deciphered, making a life-size stele of King Tanyidamani (180-140 B.C.), completely covered with texts, all the more tantalizing. As with the rest of Nubian history, the historical record has thus been left to others to be written. Still, a final gallery in the exhibition gives a vibrant if necessarily cursory sense of the culture of the seven centuries of Meroitic civilization. There is stunning, and often witty, pottery, highly refined jewelry and a quiver recalling the famed skill of Nubian archers. Several other examples of warfare symbolism remind you that a standing army had contributed for centuries to the survival of Nubian culture. And a variety of Greek and Roman imports are also on view: a Greek head of Dionysus, Roman and Roman-style bronzes, and a charming sandstone statue of a queen and two goddesses.

The aesthetic power of the exhibition is so strong that its political implications can escape you. But there is no doubt that the M.F.A., as it approaches its 150th anniversary and promises a closer connection to the community, is performing an act of reparation as well as one of reclamation. The colonialistic and racist reasons for the neglect and the misinterpretation of Nubian culture provides a continuo as you move from one gallery to the next. And there is still more to be considered: Another strong suggestion of the show is that Nubia, especially in the Meroitic period, was part of a significant cosmopolitanism avant la lettre. The show is explicit about Greek and Roman interchange. Other recent research suggests that Meroe’s trade may well have reached across the Indian Ocean to India itself. Another blow to the myth of cultural isolationism!

More painful, though not treated in the exhibition, is the current situation of Sudan, which only became independent from British colonial rule in 1956. The country has suffered through three successive civil wars and despite the declaration of the independence of South Sudan in 2011, continues to suffer profound unrest and economic distress (not to mention the horrors of the Darfur genocide that began in 2003). It is too much to hope that the M.F.A.’s exhibition will offer some comfort to the Sudanese people. But it should remind all its visitors that Sudan is not only meant to be part of God’s good creation but for many centuries represented it splendidly.