HBO’s ‘Watchmen’ is a searing novel about race in America 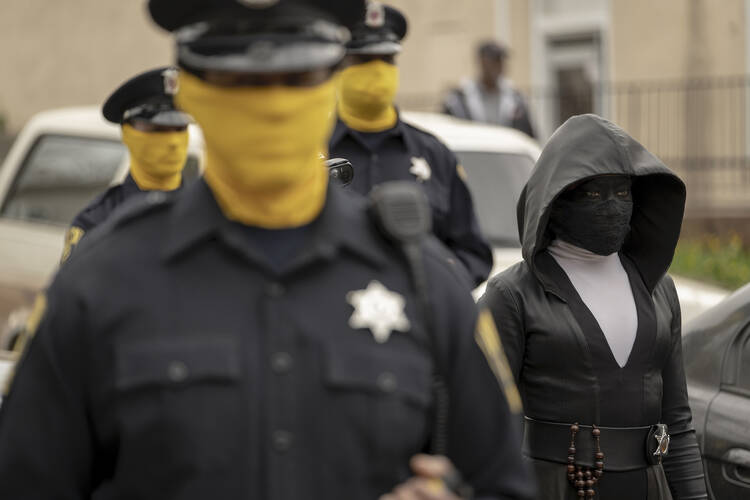 So here’s the pitch: a TV show based on a beloved 1985 comic book about an alternate reality in which superheroes end up winning the Vietnam War for the United States but later murder three million Americans as part of a secret scheme involving a fake alien invasion used to prevent a nuclear war between Russia and the United States. But the show is set 35 years after the comic book with a new cast of characters, most of them police officers who are attempting to stop a white supremacist group based in Tulsa, Okla.

It doesn’t exactly roll off the tongue. And the first season of HBO’s “Watchmen” has been at times an equally confounding experience in terms of story and structure. But when the series hascome into focus—and as it has progressed, it has done so much more often—what it offers is not another high concept sci-fi series but a searing novel about race in America.

The new series from Damon Lindelof is more than another high concept sci-fi series.

The show begins with a horrifying event: In 1921 the white citizens of Tulsa conspire to murder their black neighbors in the streets, even bringing in a plane to firebomb black homes and businesses. The effects of that long-ago incident continue to play out in the present, both in Tulsa generally and in the life of the show’s main character, Angela Abraham (played by the ever-outstanding Regina King), whose grandfather survived those events as a child through an escape-from-Krypton-like sacrifice on the part of his parents.

Here is the twist: While “Watchmen” is presenting an alternate history, the 1921 Tulsa attack is not a fictional event. Hundreds of black men, women and children in Tulsa were indeed killed by their white neighbors, with another 800 wounded and thousands more arrested. The Oklahoma Historical Society calls it “the single worst incident of racial violence in American history.”

This is a show about people who are in a kind of prison. The traumas that go unremembered remain unredeemed and also inescapable.

That this event is almost entirely forgotten by Americans today sits at the very heart of “Watchmen.”This is a show about people who are in a kind of prison, and the viewer is not excluded from that. The traumas that go unremembered remain unredeemed and also inescapable.

Into this already-potent cocktail, Damon Lindelof, the series showrunner, adds the weirdest and narratively most difficult element of the original “Watchmen” universe: Doctor Manhattan, a blue, glowing naked man with god-like powers who experiences his entire existence all at the same time. In the brilliantly written flashback episode that introduces him, he woos Angela largely by telling her all the different things that are going to happen to them over the course of their relationship.

An event almost entirely forgotten by Americans today sits at the heart of “Watchmen.”

In the comic book, Doctor Manhattan’s cross-time existence traps him in a permanent sense of isolation and futility; from his perspective, the future has already happened, and therefore there are no choices left for him to make, nor anyone with whom he can truly relate. He is a lonely god in chains.

But the series takes his plight in an entirely different way. Rather than permanently removing him from humanity, Doctor Manhattan’s experience of time encapsulates the American experience. Whether as victims or oppressors we are all, in a sense, Doctor Manhattan, our past informing our present, the future haunting our choices, and all of us together living through the same never-ending cycle of oppression and violence. The endgame of the series, in fact, imagines a repeat of the massacre, but on a global scale, with the white supremacists intending to steal Doctor Manhattan’s powers so as to finally wipe black people from the face of the earth.

Whether as victims or oppressors we are all, in a sense, Doctor Manhattan, our past informing our present, the future haunting our choices.

Race figures in the series in other ways as well. Jeremy Irons’ Adrian Veidt lives as a sort of imprisoned king in a “‘Downton Abbey’ in Hell” parallel world filled with nothing but submissive white clones. Apparently this was meant to be the utopia for which Veidt had always strived, and yet being there has driven him nearly insane with its lack of any meaningful diversity or conflict. Those fighting to “get Brexit done” or “build that wall” take note.

America’s post-war Vietnam, too, recurs repeatedly as a community living through its own endless loop of repression and revenge.

There is a finality to the way the season ends, with the white supremacists “Thanos-snapped” out of existence, a far more dangerous threat eliminated and the good guys finally back on their feet.

Yet that finality is treacherous, too; wiping out your opponent is after all the very definition of the cycle of violence that has so long consumed them all, and also us. The villains’ elimination brings a sense of resolution to the moment, but it is hard to believe more murder is the thing that is truly going to break that pattern.

And at the very last moment we are left with something that could very well be altogether new: the passing on of Dr. Manhattan’s divinity to Angela, in a moment suffused with generosity and wonder.

How will Angela use those powers: to capture or set free? We are given no signal. But the words of her grandfather, a black man who became the world’s first masked vigilante, would seem to say it all. “You can’t heal under a mask,” he tells her. “Wounds need air.”