Reader Rebuttal: The 10 Greatest Catholic School Movies of All Time 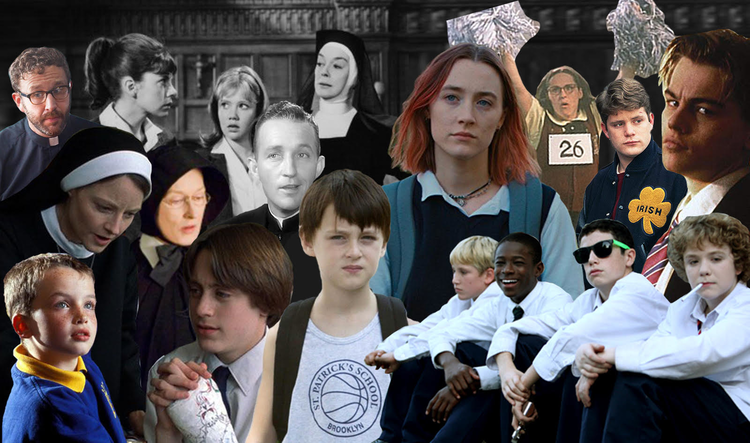 Catholic schools are the perfect setting for a film. There are preset costumes with uniforms and habits, clear hierarchies and social orders—not to mention characters at the ripe spot in their lives, ready to come of age.

Ciaran Freeman spent last summer, after his year as an O’Hare fellow at America Media, combing through movies about Catholic schools and ranking them. The findings were published here. Since then, readers have written in to let Mr. Freeman know what films he overlooked in his top-10 ranking.

What film is missing from our list? Make a case for why it belongs.

“Heaven Help Us” This is a wonderfully acted coming of age story set in New York at the fictional St. Basil’s academy, a strict Catholic school where the protagonist bonds with some unlikely allies, falls in love and comes to terms with and confronts what he (correctly) perceives as injustice coming from his peers, teachers and other adults. A beautifully nostalgic piece for anyone who attended Catholic school, especially in the 1970s or 1980s.

“Wide Awake” The movie, written and directed by M. Night Shyamalan, is about the fifth grader Joshua Beal, who is searching for God after the death of his beloved grandfather. Rosie O’Donnell plays Sister Terry, a decidedly “modern” sister. She is a far stretch from the strict “nun-teachers” of the past. The film was panned by most critics but loved by those looking for spiritual values in film.

“St. Ralph” is about a Catholic school teenager who hopes for a miracle to bring his mother back from a coma. He decides to try to win the Boston Marathon, which he figures should be a miracle deserving of such a reward. It captures the struggles of puberty and “fitting in” of adolescence and the power of faith. The priests are real people who are really concerned about how the main character survives his struggles.

“Au Revoir les Enfants” Your list has a strong American bias. The biggest overseas absence is this film by Louis Malle. It is set in a French Carmelite boarding school in the winter of 1943-44 and deals with the themes of friendship, identity, charity, bravery and betrayal.

“Sister Act 2” A wonderful depiction of a dedicated, holy and passionate group of nuns who are shown as real people, who make a huge difference in the lives of a diverse group of inner-city kids.

After re-viewing “Heaven Help Us” (on you tube) I qualified my original comment. Here's my qualified comment:
“I second Michael Dunn's choice of "Heaven Help Us" as representative of Catholic Ed. in the 60s, remembering, though, that it exaggerates for comedic and dramatic effect. I'd focus on his categorization of "strict", both as a strength (Philosopher Michael Novak references the Brothers' methods as "tough love") and a serious weakness; it could be abused, criminally so, as In the film. Bro Constance hits; Brother Thaddeus rightly take steps to remove Bro. Constance.”
But even the qualification is off the mark. So I went to Roger Eber’s review and I think he is exactly right. For those interested, here’s his review:
February 11, 1985 |
If you remember those little clickers that the nuns used to use, you'll know why I liked the beginning of "Heaven Help Us" so much - and why I had such mixed feelings about the rest of it. The clickers were dime store crickets that made a nice, loud click, perfect for signaling a First Communion class so all the kids would stand up at the same time, and kneel at the same time, and start filing down the aisle together. In an opening scene of the movie, a kid has his own clicker, and uses it to sabotage the nun's signals, so that the whole class is bobbing like a yo-yo.
I thought that was funny, and I thought it set the tone for an affectionate, nostalgic, funny look back at Catholic school education in Brooklyn of the 1960s - sort of a cross between "Do Black Patent Leather Shoes Really Reflect Up?" and "Sister Mary Agnes Explains it All for You."
Unfortunately, what the movie turns into is more like a cross between "Stalag 17" and "Porky's," as sadistic teachers beat every, last glimmer of spirit out of students, and kids establish new indoor records in self-abuse.
Because "Heaven Help Us" does not have the slightest ambition to be a serious movie about Catholic high schools, I can't understand why the classroom scenes are so overplayed. As the sadistic teaching brother (Jay Patterson) slams his students against the blackboard, all we're really watching is a lapse in judgment by the moviemakers. The scenes are so ugly and depressing that they throw the rest of the movie out of balance.
And that's too bad, because here and there in this movie are moments of real insight and memory. There's a special charm in the sweet, shy romance between a student (Andrew McCarthy) and the daughter (Mary Stuart Masterson) of the local soda fountain owner. I also liked a character named Caesar (Malcolm Danare), who pretends to be a snotty intellectual, as a defense against the heat he gets because he's smart.
The strange thing about the movie is the way the moments of inspiration raise our hopes, and then disappoint them. Take the scene where the school plays host to the nearby Catholic girls' school at a dance. The boys and girls are lined up on opposite sides of the room, and then an earnest little priest (Wallace Shawn, from "My Dinner With Andre") stands up on the stage and delivers a lecture on The Evils of Lust, gradually warming to his subject. The idea of the scene is funny, and it has a certain amount of underlying truth (I remember a priest once warning my class, "Never touch yourselves, boys" - without telling us where). But Shawn's speech climbs to such a hysterical pitch that it goes over the top, and the humor is lost; it simply becomes weird behavior.
"Heaven Help Us" has assembled a lot of the right elements for a movie about a Catholic boys' high school - the locations, the actors, and a lot of the right memories. But it has not found its tone. Maybe the filmmakers just never did really decide what they thought about the subject. For their penance, they should see "Rock and Roll High School."

For me, “Heaven Help Us” was incredibly realistic and nostalgic. The former school and the local environs where it was filmed almost could have been my actual elementary school. And the high school teaching brothers seemingly were modeled on some of my actual teachers. Also, the name of the high school principal was identical my the principal of my actual high school.

For me, “Heaven Help Us” was incredibly realistic and nostalgic. The former school and the local environs where it was filmed almost could have been my actual elementary school. And the high school teaching brothers seemingly were modeled on some of my actual teachers. Also, the name of the high school principal was identical my the principal of my actual high school.