‘Scary Stories to Tell in the Dark’ review: It terrifies, but lacks malice 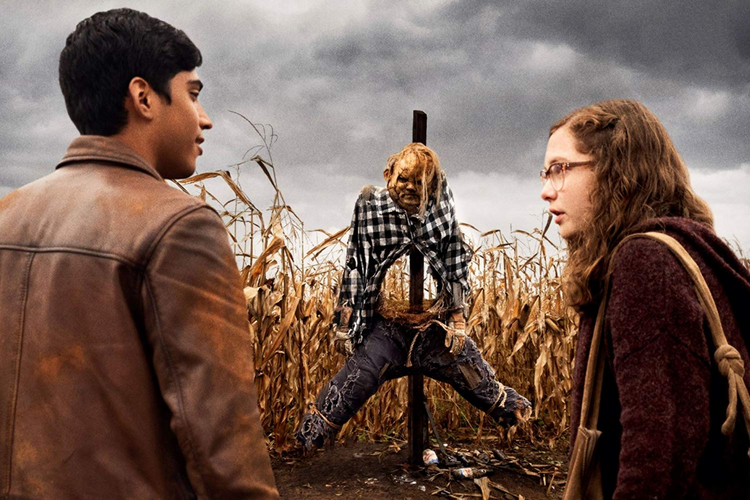 What we remember are the pictures. Children of the ’80s through the ’00s—the heyday of the Scary Stories to Tell in the Dark series, whose first installment was published in 1981—will tell you that the stories themselves, by Alvin Schwartz, were only O.K. It is true that we think of them now and then: the grisly nursing school prank; the bride who played hide-and-seek and got trapped in a trunk. Eerie phrases do float through our heads in dark hours: “Wait till Martin comes.” “Somebody fell from aloft.” “She was spittin’ and yowlin’ just like a cat.” But what we remember—what made us pad down the stairs in the dead of night to shove the books in the fridge, where they couldn’t get us—are those drawings.

Burnt-out eyes and splayed screaming figures. Spider legs and splotches of ink. Roots and hair and everything that twists. Stephen Gammell’s illustrations made Scary Stories feel like a pop-up book, with a new grinning horror springing forth from every page. Those unforgettable drawings seemed to leave a child’s mind soiled; the very pages reeked of grave-dirt and the sweetness of rot. Those drawings could convince a kid that reading is bad.

What made us pad down the stairs in the dead of night to shove the books in the fridge, where they couldn’t get us—are those drawings.

The new film inspired by the series understands that the look is what matters here. “Scary Stories to Tell in the Dark” gives a lot of aesthetic pleasure. It is October 1968, just in time for Donovan’s “Season of the Witch” to play on the radio; just in time for Halloween. Everything is autumn-rich, pumpkins and cornfields. You can almost smell the acrid wind. A certain kind of horror fan—my kind, as it happens—will find herself thinking, Oh look, it’s mist! I love mist. The film is generous with such simple comforts.

“Scary Stories” isn’t quite an anthology film. A crew of misfits tries to get revenge on the local bully; he traps them in a spooky abandoned house, where they find a book once owned by reputed child-killer Sarah Bellows. She would tell kids scary stories, and then they would die. Various terrible fates befall our heroes, as the book magically writes new chapters in blood. The kids seek the truth about Sarah, hoping to find something that will let them escape her evil storytelling—but will they be too late?

The standout misfits are Stella (Zoe Margaret Colletti) and Ramón (Michael Garza). We have seen Stella’s kind before: She loves horror movies, she wears glasses, she’s The Girl among the dorky misfit guys; she blames herself for her mother’s decision to leave the family, her dad falls asleep in front of the TV and she covers him with a blanket, et familiar cetera. But Colletti gives Stella sincerity and, most important, raw terror and despair. Colletti is a spectacular teenage scream queen.

Ramón is a much fresher character: Claiming to be a migrant farmworker, he is actually dodging the draft. “Scary Stories” has a lot of ambient wokeness, most of which feels perfunctory or cartoonish. Ramón, by contrast, is the character who feels the least shopworn. He has had to do a lot of growing up before the movie starts. The bully’s pranks have more severe consequences for him than for the others. He only sticks around, working on the mystery and falling for Stella, because he is suspected of murder and cannot leave town—a brown-skinned drifter and a convenient scapegoat.

The film’s first segment, “Harold,” about an abused scarecrow’s revenge, shines partly because it explores Ramón’s situation—but mostly because it gets closest to the rancid power of Gammell’s illustrations. Harold the scarecrow, with his malevolent rotting-potato face, slumping shoulders and awful spread-eagle legs, looks at once helpless and hateful, villainous and victimized. Later sequences capture some of the books’ charms: the gross-out humor of eating a toe or the sheer weirdness of the “Jangly Man,” who contorts and detaches his limbs while chanting the nonsense threat, “Me Tie Dough-ty Walker!”

Schwartz’s characters do not rise above. They rot, alone and forgotten, often in a trap of their own making.

But the film’s greatest failing, which made this sugary confection leave a bad taste in my mouth, is that it utterly lacks the books’ ill intentions. “Scary Stories,” the movie, wants you to champion silenced women and expose the evils of capital and burn your draft card or whatever (actual dialogue from cartoon bullies: “Commies are gonna pay! Let’s go scare some kiddies tonight!”). Above all, the movie wants you to be strong. It wants to teach you even more than it wants to scare you.

In “The Bed by the Window,” published in More Scary Stories to Tell in the Dark, the patient in the titular hospital bed describes life outside the walls so vividly that another patient kills him (knocking his heart medication away) in order to take over his bed. The story ends when the triumphant killer looks out the window for the first time—and sees only a blank brick wall. This is the Schwartz style. Schwartz’s characters do not rise above. They rot, alone and forgotten, often in a trap of their own making. You laugh at the story’s twists but with a sinking feeling that the joke is on you.

“Scary Stories” the movie lets the dog live. The movie ends with determined survivors vowing to carry on the fight, as Stella’s voiceover declares, “And if there’s anything I learned from Sarah, it’s to never give up.” What is the point of horror movies if they end up as commencement speeches?

If I wanted wholesome encouragement I would have trick-or-treated at the dentist’s house.

I love horror movies. This one was good. Ready or Not is another good one, we get a nice surprise at the end. IT chapter 2 was amazing!! The beginning scene sticks close to the book about the gay couple.