In ‘Booksmart,’ these girls just want to belong 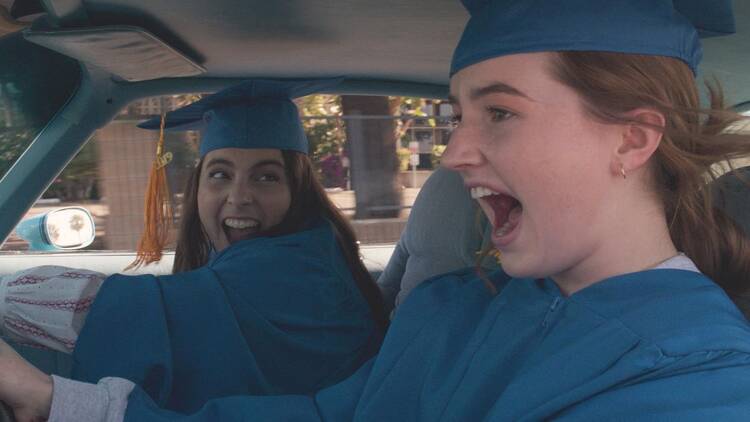 Director Olivia Wilde’s “Booksmart” is a slapstick bildungsroman that follows two best friends on their last day of school as they learn to lighten—and light—up. It mixes the raunchy romp of Seth Rogen–Judd Apatow bro-coms (“Superbad,” “Knocked Up” and “Neighbors”) with John Hughes’ nostalgia while simultaneously charting its own “grrl power” path.

Starring Kaitlyn Dever as Amy and Jonah Hill’s younger sister and comedy-doppelgänger, Beanie Feldstein (“Lady Bird”) as Molly, everyone’s least favorite class president, the film is a largely carefree romp through the free-for-all of insecurities that is high school. But, while having its laughs, “Booksmart” tramples stale stereotypes of the genre. It gleefully deconstructs the tidy categories of jocks and goths, the nerds and the popular, found in movies like “The Breakfast Club.” Like “Lady Bird,” and unlike “Superbad,” the film’s point of view is decidedly female. It passes the Bechdel test with flying colors. Here, good girls should get to be bad, because the bad girls have it good. That’s the Good News according to Olivia Wilde.

Here, good girls should get to be bad, because the bad girls have it good.

As a former high school teacher, I have witnessed the woeful results of students’ obsession with the partying they see in Hollywood’s version of high school. Watching the film I felt my teacher’s heart tensing, thinking of promising students who lack the privilege of Southern California teens who can score Georgetown acceptances even when burying their noses in “vitamin powder” rather than their books.

But Katie Silberman’s script makes allowances for old fogeys like me—for example, when the Very Cool Teacher (played by Jessica Williams, whose character’s name is literally “Miss Fine”) endorses her favorite Friday-crossword-loving students’ antics by warning of how derailed life can get when work isn’t integrated with play.

The film is a largely carefree romp through the free-for-all of insecurities that is high school.

The film’s heart lies in its characters’ search for belonging. What the students of Crockett High in Los Angeles truly want—more than academic perfection, more than a crazy night out or even more than that magical moment with the hot jock or cool skater girl—is to belong. A young woman with the unfortunate nickname of “Triple A” wants to be known by her true name, not a derogatory epithet; Jared the wealthy loner wants to survive the gauntlet of high school so he can find people “into the same weird [stuff]” he is. The film is at its most excruciating—but winning—when the characters’ search for belonging clashes with their own inability to be themselves.

In high school, Molly has studied hard, poured herself into the right leadership roles and carefully curated a picture-perfect resume. Ergo, she should now be ushered into the club of belonging that comes with sacrificing one’s self to success. In the washroom at school, Molly boldly confronts the cool kids who mock her behind her back for having the social appeal of a bulldozer. Emerging from the bathroom stall, Molly fires cutting rejoinders, reminding them (and herself) of her own self-worth—demonstrated by Ivy League acceptances and an A average. Little does Molly know that each of her bullies have also won entry to elite post-grad paths. They are both “fun” and successful. Without having made the sacrifices Molly has, they, too, will get to belong.

At the end of the day, this motley crew of high school students want to live an authentic life. They want to be known, by themselves and by others.

Molly’s desperate attempt to course-correct through a night of debauchery is the response of someone whose rug has been whipped out from under her. If the narrative was a lie, if she didn’t have to sacrifice fun for the sake of a prized identity, then what does it mean to belong?

To the film’s credit, this question is not drowned in the barrage of drunken somersaults into pools and party hijinks. At the end of the day, this motley crew of high school students want to live an authentic life rather than follow a preconditioned script laid out for them. They want to be known, by themselves and by others.

Molly and Amy discover that what everyone else is looking for on this final night of high school is the one thing they have together: belonging. Their honest friendship, made of two imperfect people who can be themselves and accept each other through thick and thin, is an accomplishment greater than valedictorian honors or bedding the hottest guy or girl at the party. And that’s a lesson I would happily teach my students.

Renée Darline Roden holds a bachelor’s and master’s degree from the University of Notre Dame and currently works as an editor for FaithND and as a playwright in New York City. Her writing has appeared in Howlround, Church Life Journal,and Image Journal’s Good Letters.

I actually walked out of this movie at the point two girls were ripping off each other’s clothes at a party. I get that there was maybe a positive overall message, which is why I went to see it on the first place, but I wasn’t willing to walk through the mess of the movie to see them get to it. If this is the new normal in high school, perhaps more kids should be home schooled.

Thank you, Martha. That is the kind of info that I want when I read a Catholic movie review. Unfortunately, I find America's reviews lacking this viewpoint.