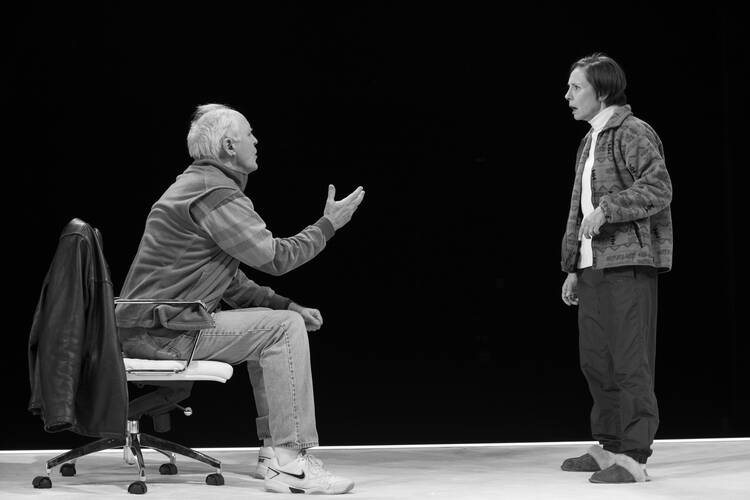 John Lithgow and Laurie Metcalf in "Hillary and Clinton" at the John Golden Theatre on Broadway. (Photo: Julieta Cervantes)

Is the future really female, as a popular T-shirt slogan has it? Two new Broadway productions built around strong female performances offer occasion for both despair and hope that we can break the chains of the toxic male domination of the present.

In a strange and strangely watchable new revival of Shakespeare’s “King Lear,” Glenda Jackson—stage royalty in her own right, as well as a former British member of parliament—doesn’t play the aging Lear as a woman, though she’s not quite playing a man, either. The results are as confounding and fascinating as that may sound. And in Lucas Hnath’s brittle new play “Hillary and Clinton,” the title character’s failed presidential bid in 2008 comes off as a minor tragedy of internalized self-limitation. The very tools she’s used to survive prove useless, even antithetical, to a bid for national office.

Metcalf’s Hillary squirms under contradictory male expectations—fight back, but don’t be a b--

Clinton is the paradigmatic example of what some scholars of female leadership have identified as the “double bind,” which sees competence and charisma as mutually exclusive in women. In Hnath’s play, Hillary (Laurie Metcalf), has clearly put all her bets on competence, while husband Bill (John Lithgow) unsurprisingly presses her to show more humanity and “authenticity.” Set over a few nights in a New Hampshire hotel room during Hillary’s 2008 primary campaign against Barack Obama, the play stages several punchy, cathartic moments between the two Clintons: We get to hear her lay into his infamous infidelities and to openly contemplate divorce. We hear him bluntly represent voters put off by her ostensible chilliness and self-possession. “People don’t vote with their brains,” Bill tells his wife. To which she replies, in one of the evening’s applause lines, “People should grow the [expletive] up.”

Hnath’s play could ultimately use less contemplation and more combat.

While her more recent presidential campaign (not to mention the current occupant of the White House) is not part of the play’s text, it is most definitely part of its subtext. Metcalf’s Hillary squirms under contradictory male expectations—fight back, but don’t be a b--. She seems to contemplate how she might be complicit in living down to these norms, even as she struggles to defy them.

Hnath’s play could ultimately use less contemplation and more combat. More a ruminative fugue on familiar themes than a meaty drama or fully satisfying comedy, “Hillary and Clinton” is more appetizer than meal. The play’s studious avoidance of direct imitation of either of the Clintons would seem to promise other compensations—universal insight, tragic resonance, something—but they remain largely elusive. With actors this strong, under the sharp direction of Joe Mantello, this seems like a wasted opportunity.

In this catch-all theatrical world, the time period could be called 20th-century fluid.

Director Sam Gold’s take on “King Lear” likewise squanders rich veins of talent, though it is not without a certain curious intrigue. This puzzling modern-dress interpretation makes a few half-hearted gestures toward contemporary politics—the Trump Tower-like gold set, by Miriam Buether, or the American flag socks of the Fool, played by Ruth Wilson. But it otherwise employs an eclectic theatrical style that has become familiar in productions of Shakespeare. In this catch-all theatrical world, the time period could be called 20th-century fluid. Many varieties of American and British accents coexist without comment, guns mostly replace swords, a single battered set stands in for all locations, and casting is non-traditional along several lines (race, gender, physical ability). The Bard not only can stand up to this kind of treatment; I’ve seen his work positively thrive in modern-dress productions, ranging from Bill Rauch’s riveting “Hamlet” at Oregon Shakespeare Festival in 2010 to Gold’s own pressure-cooker “Othello” at New York Theatre Workshop in 2016.

Glenda Jackson presides with cool, untouchable hauteur over the proceedings.

This “Lear” doesn’t succeed as well within this free-form template. Some performances, like Pedro Pascal’s as rascally Edmund, or Wilson’s as the Chaplin-esque Fool, stand out memorably, as they likely would in any staging of “Lear.” Others, like Elizabeth Marvel’s feral Goneril, seem like transplants from another, more vigorous production. This may be in part because Marvel, like most actors here, can’t strike a spark off of the show’s remote lead performance. Indeed, as the jealous king, Glenda Jackson presides with cool, untouchable hauteur over the proceedings. With short-cropped hair and a slightly baggy three-piece suit, her Lear doesn’t rage so much as simmer and sputter.

Jackson made me hear the work’s howling bitterness and thoroughgoing misanthropy with fresh ears.

Yet as irritated and often baffled as I was by this staging, I was seldom bored. And while I never got a strong sense that Gold, or anyone involved, has a clear animating idea what the play is about, “Lear,” like many a great, old work, is in some ways about itself. Even a misguided or subpar production can place us inside its self-contained world to an extent. Ruling over this bleak realm with regal contempt and shambling self-possession, connecting meaningfully to no one else onstage (with the arguable exception of Jayne Houdyshell’s stalwart Gloucester), Jackson made me hear the work’s howling bitterness and thoroughgoing misanthropy with fresh ears. That is hardly a recipe for a great night at the theatre, but it’s not nothing.

Ringing a bit distractingly through these two productions are echoes of previous Broadway seasons. Last year Jackson and Laurie Metcalf headlined an acerbic staging of Albee’s “Three Tall Women,” directed by Joe Mantello; the previous year, Sam Gold directed Metcalf in Lucas Hnath’s droll, affecting “A Doll’s House, Part 2.” As both of those were better than this season’s offerings, this may be a case of diminishing returns. May I suggest a better way forward: Perhaps both Jackson and Metcalf should break another glass ceiling or two, and seek out plays by women, directed by women, for their future Broadway outings. That would constitute true female leadership.

Glenda Jackson was spell-binding. Give me an 83 year old actress with heft in the role of a feeble and broken Lear any day over a younger male trying to act and sound elderly.

The audience was mesmerized the night we attended and leapt to a standing ovation earlier than I’ve ever witnessed on Broadway.