A new production tells the story of Father Tolton, the slave who became a priest 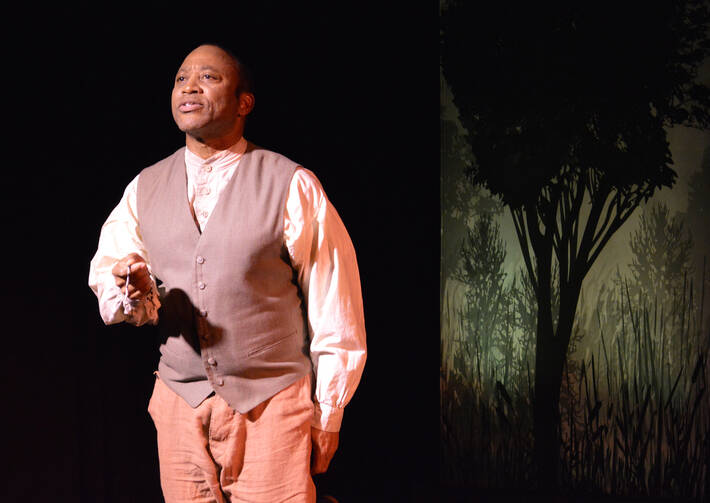 Two years ago, the actor Jim Coleman had never heard of the Rev. Augustus Tolton, who is believed to be the first African-American Catholic ordained a priest. Now he portrays him in a production, “Tolton: From Slave to Priest,” which is currently touring the United States.

Based on the book From Slave to Priest: The Inspirational Story of Father Augustine Tolton, by Caroline Hemesath, S.S.F., the play is an account of Father Tolton’s remarkable life. After escaping from slavery with his mother and siblings, the young Tolton was raised in Illinois in the Catholic faith. Rejected by U.S. seminaries because he was black, Father Tolton repaired to Rome, where he studied for the priesthood. After his ordination in 1864, “he wants to go to Africa where he wants to be a missionary, but he’s sent back to the ‘enlightened’ country of America,” said Leonardo Defilippis, the founder of Saint Luke Productions, which produced the play. Father Tolton returned to the United States, where eventually he started St. Monica Parish on Chicago’s South Side, ministering to African-American and white parishioners.

Mr. Defilippis first learned about Father Tolton while visiting the Diocese of Springfield, Ill. “A pastor gave me a book on [Tolton] and said, ‘Could you do a show?’ That’s what we do at Saint Luke Productions. We’ve done that for 38 years.”

Mr. Defilippis started Saint Luke Productions in 1980 to stage a production about the Gospel of Luke. Since then, he and his wife, Patti Defilippis, have staged a dozen other plays. Saint Luke worked on “Tolton” for two years before it opened at Chicago’s DuSable Museum of African American History in November 2017.

“How do you take someone’s life and put it in an hour and a half?”

“How do you take someone’s life and put it in an hour and a half?” said Mr. Defilippis. He contacted Cardinal Francis George, who introduced him to Auxiliary Bishop Joseph Perry, the postulator of Father Tolton’s cause for sainthood, with whom Mr. Defilippis and his wife wrote the script. They consolidated canonization documents and historical documents, even reaching out to descendants of the Elliotts, the white family that had owned Father Tolton when he was a slave.

In the dead of winter, Helen Sung’s jazz feels like summertime
Brandon Sanchez

Mr. Coleman is astounded by the response the show elicits from the audience. “We were in Daytona Beach,” he said, “and a woman came to me—she was crying—and said that during the scene where Father Tolton died and spoke to his mother, she saw her son who had died. After that, then I’m in tears because I’m just like, ‘That is amazing.’”

A short film about Father Tolton, written and directed by the Nashville filmmaker Chris Foley, premiered this year. It follows Father Tolton’s escape from slavery with his mother, Martha, and three siblings.

“A couple of times I had to hold back tears as my eyes were watering up,” Bishop Perry said of the film in an interview with Catholic News Service, “and I look forward to the next chapters of the film that will entail Father Tolton’s life in his adolescence, adulthood, priesthood and death.”

“Father Tolton is an incredible tipping point,” said Mr. Defilippis. “As a native son of America, his story is so triumphal in the sense of what he was eventually able to do,” responding to persecution and oppression with an outpouring of love.

The play is currently touring the United States.

When the sins of the USA Catholic Church are fully accounted, it will not be the failures in the child sexual abuse cases or the support for immoral wars for which there will be the greatest guilt. Rather, its greatest sin is the failure to evangelize and bring into the mainstream of its congregations those ethnic and racial communities which were and are the victims of entrenched segregation. Read the story of Augustus Tolton. Refused by any Catholic seminary in the USA, he is a singular example of that failure. But his life story of faithfulness to Catholicism is a stunning witness to the power of Christ in spite of His Church.

Tell the story to the director of the museum in Washington. There is a large black American Catholic community there. They should know about this saintly man.