Remembering when Reagan set aside politics to honor Bobby Kennedy

Remembering when Reagan set aside politics to honor Bobby Kennedy 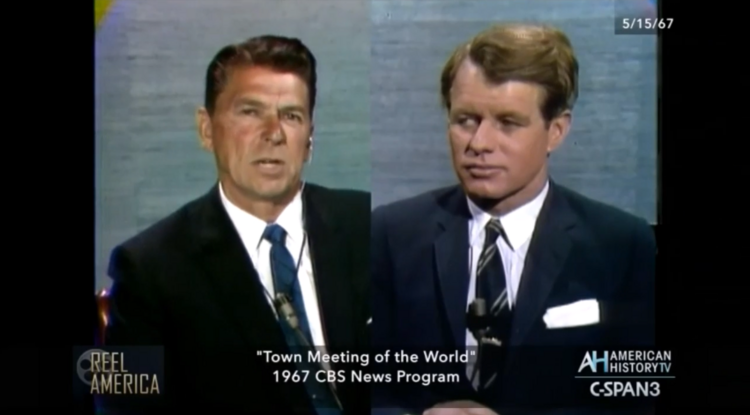 The world of politics was far from ordinary in 1968. The hope and promise of the decade’s early years started to dissipate, first with the assassination of President John F. Kennedy in 1963 and subsequently with the social unrest that followed despite the passage of historic civil rights legislation. Feelings grew more and more raw over the Vietnam War when people began to realize that the perception was different from the reality. Robert F. Kennedy played a large role in the events of the 1960s, and he knew that he could be a divisive political figure. In the years after his brother’s death, he had undergone personal as well as political transformations, and he spent the year before he announced his candidacy in anguish over whether he ought to run.

He knew that the political road ahead for him would be hard and risky. But he felt he had to try—and for his efforts, he lay mortally wounded on the pantry floor of the Ambassador Hotel in Los Angeles on June 6, 1968, after acknowledging his victory that night in the California Democratic presidential primary. People of every political persuasion mourned this additional tragedy, just two months after the killing of Dr. Martin Luther King Jr. in Memphis, Tenn. Many people had hoped that after Dr. King’s killing, Robert Kennedy could somehow bring black and white Americans together. Now it seemed that hope was gone. Among those who opposed him politically but mourned him personally was one man who had recently crossed paths with him, Ronald Reagan.

Reagan was seen as a rising star in the Republican Party because of his strong support for presidential candidate Barry Goldwater in his 1964 “Time for Choosing” address and was elected as the Republican governor of California in 1966. With Barry Goldwater’s landslide loss to Lyndon B. Johnson in 1964, many Republicans looked to the former actor for political solace and inspiration.

But politics was secondary for Reagan when he learned of Kennedy’s shooting. That evening, he wrote out a quick note of sympathy and condolence to Ethel Kennedy, who was pregnant at the time with the family’s 11th child and who was keeping vigil beside her husband at Good Samaritan Hospital in Los Angeles. Gov. Reagan’s words were simple and heartfelt: “I know there is little anyone can say at such a time but if there is anything we can do to be of help in any way, please let us know. Our thoughts and prayers are with you. Nancy and Ronald Reagan.” Reagan went so far as to offer the services of his neurosurgeon father-in-law, Dr. Loyal Davis.

Reagan’s words to Ethel Kennedy were simple and heartfelt: “I know there is little anyone can say at such a time but if there is anything we can do to be of help in any way, please let us know. Our thoughts and prayers are with you.

Reagan’s previous relationship with the Kennedys was not a positive one. In 1962, Robert Kennedy’s Justice Department investigated the entertainment giant MCA and its relations with the Screen Actors Guild (Reagan was the former Screen Actors Guild president) on antitrust charges. Although no irregularity was found, and Reagan was innocent of any wrongdoing, General Electric, which employed Reagan as a spokesperson at the time, was apparently frightened by the scrutiny and let Reagan go. The former movie actor was now also a former corporate spokesman. Ironically, such action eventually put him on the path to the career he really wanted, politics.

Ronald Reagan and Bobby Kennedy would finally cross paths on a more personal level five years later, by way of a television hookup in May 1967. Both men (in separate studios, Reagan in Sacramento and Kennedy in Washington, D.C.) were to “debate” each other and a panel of international college students from a studio in London. By that time, Reagan was governor of California and Kennedy was the U.S. senator from New York. The CBS program was called “Town Meeting of the World,” and the topic for discussion was “The Image of America and the Youth of the World.” The dialogue—such as it was—was a program of heated and often hostile questioning about the United States and its role in Vietnam.

In the aftermath, Reagan was judged the victor, with his poise, unflappability and knowledgeable recital of the facts at hand. (It didn’t hurt that in his “debate prep” he had former president Dwight D. Eisenhower to assist him.) For his part, Kennedy appeared unsure and hesitant. He knew that Reagan had bested him. The hostility from the students was palpable, not only toward the governor and the senator but also toward the moderator, CBS correspondent Charles Collingwood, and the lone American on the student panel, Princeton’s Bill Bradley (then studying at Oxford), who would later have a career in both basketball and politics.

When Gov. Reagan wrote that letter as Kennedy lay dying, he lost any zeal he had for making a presidential run that year.

Fast-forward to another June 5, 13 years later in 1981. Ronald Reagan is president of the United States. He, along with Ethel Kennedy and other members of the Kennedy family and administration, are gathered in the Rose Garden for the presentation of the Congressional Gold Medal struck to honor Robert F. Kennedy. Reagan’s predecessor, Jimmy Carter, was due to preside at the ceremony but was unable to do so (possibly because he resented Ted Kennedy’s 1980 presidential primary challenge, which likely led to Reagan’s win over Carter in the fall election). It fell to R.F.K.’s old “debate partner” to make the presentation.

President Reagan jumped at the chance to preside at such a ceremony; in another instance of irony and coincidence, he did so just a few months after an assassination attempt was made on his life. Politics were put aside, and political comity reigned on a sunny, breezy afternoon, dubbed by those present as “Kennedy weather.” With typical graciousness and generosity, President Reagan recalled the honor, the passion and the patriotism of Robert F. Kennedy. His goodwill would not end there, however. In time, he would invite the Kennedy matriarch, Rose, to lunch at the White House, and he would order that President Kennedy’s official portrait be rehung in the house he once inhabited for all to see. And he would accede to the pleas of the late president’s children, John and Caroline, to help raise funds for the Kennedy presidential library.

Ronald Reagan reflecting on Bobby Kennedy: “I’ll tell you one thing. He’d have made one helluva president.”

Not long after the award ceremony, President Reagan spoke on the phone with Barry Goldwater, the man he campaigned for so long ago. Talk turned to a favorite topic, that of the Kennedy brothers, whom Goldwater knew well and esteemed. Goldwater asked Reagan if he thought Robert Kennedy could have been elected. President Reagan responded by saying: “Who knows, but I’ll tell you one thing. He’d have made one helluva president.”

And 23 years after that ceremony and conversation, President Reagan himself died at the age of 93 after a struggle with Alzheimer’s disease. The year was 2004. The day was June 5.