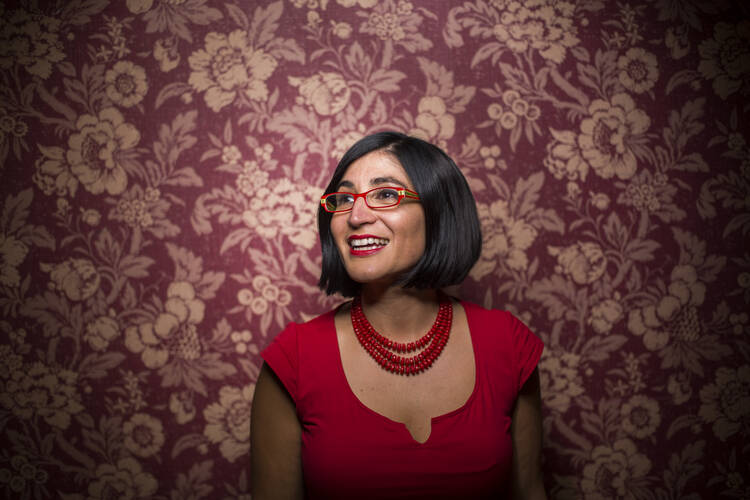 How do you change the mind of someone who thinks you don’t belong in this country because of your faith? Make them laugh, says Negin Farsad, Muslim-American comedian, actress, writer and filmmaker. And she does.

Back in 2014, she took a troupe of Muslim comedians on tour in America’s heartland to talk (and joke) about Islamophobia for the documentary film “The Muslims Are Coming!” Today, she continues to work in what she calls “social justice comedy,” using humor to confront religious hatred and racism. We ask her how she walks the line between laughing with and laughing at the people she would like to convince.

In Signs of the Times, the supporters of Ireland’s Eighth Amendment suffered a resounding defeat in the May 25 referendum, opening the door to abortion on demand. We talk about the future of the church and the pro-life movement in light of this setback. Plus: an archbishop in Australia faces jail time for failing to report sexual abuse; an ecumenical group of faith leaders takes on racism in Minnesota; and a new poll shows only 50 percent of Catholics support welcoming refugees to the United States. What gives?

When you’re done listening, you can hop on over to our Facebook group and let us know what you think! Follow us on Twitter @jesuiticalshow and send us feedback and cocktail recipes at jesuitical@americamedia.org. And if you haven’t yet, please consider leaving us a review on Apple podcasts—it’s a great way to help other people find the show.

Is Islamophobia based on fact? If yes, then is it good because Islam is anti thethical to Western civilization.

Can comedy tell the truth about Islam? If not and people change their minds the conversion is by emotion not fact and reason.

Perhaps, the more important question is, can ISIS et al be conquered by comedy?

We now live in an age where any literate human being who can read their own language may access an enormous amount of scholarship on any issue if they have access to libraries and the internet.
Specifically, the ordinary citizen can know the writings, the history and the origins of Islam in a way impossible in past ages.
The august long established Universities of Western Europe and the States are doing intense and reliable scholarship as we speak. Much of it is yet not general knowledge but truth nevertheless.

Some important points.
The Qur'an is not essentially derived or consisting of contents from Jewish and Christian writings.
It is NOT an Abrahamic faith.
The stories about characters from the Pentateuch are mostly not contained in the Pentateuch but heretical writings dated later than the alleged origin of the Koran. So also with writings presumed erroneously to be from New Testament sources, even using an Arabic name for Jesus (Isa) which belongs to a god of the people of the Nabateans.

No copy of what is now called the Koran currently exists before 200 - 250 years after the alleged existence of Mohommed and the "Golden Age" of Islam.

We now know there are two incompatible phases of the Koran.
The "revelations" and "sayings" while peaceful origin and attempt at spread by persuasion amongst Jews in Medina and the violent "revelations" and "sayings" of Mecca and the explosive imperialist colonialist epoch of the sword.
The peaceful verses are superseded by the violent verses, one truth and the other an improved truth which takes precedent today.

The three written sources needed to continue Islam are Koran, Hadith and Sira and they exude terrible cultural practices as the norm - polygamy, piracy, slavery, rape, murder of unbelievers, dhimmitude with rapacious jizya for submissive Jews and Christians.

Islamo-phobia is a neologism and deceptive.
A phobia is an irrational fear not easily susceptible to being overcome by reason, logic or reassurance by issues not necessarily posing any threat. Claustrophobia - closed spaces terrify, Agoraphobia - market places terrify, Hydrophobia - water terrifies.

Islam ascendency is appropriately to be feared, saying persons who fear being overrun by Moslems are thinking and behaving irrationally towards a non-threat is telling a lie or making a mistake.

Muslims are people and Jesus taught us to love, one another and our enemies - the persons are our fellow human beings, their beliefs are dangerous and potentially may inspire any one of them to attempt to kill, maim or enslave us.

Call to mind how comedy has been used in our lifetime - The Life of Brian is just one abominable opus of recent history.

What is America doing endorsing mockery?
What is a writer in America doing using the nonsense concept "social justice" which is a tool of the Frankfurt School of Cultural Marxism.
Christianity teaches, endorses and practices justice pure and simple and there is a mystery retained by separating the concept of justice from mercy, equally at the core of the teachings of Jesus.

Heed Vatican 2 but read the documents carefully - the religions of the Pagans, the Hindus, the Buddhists, the Jains, the Zoroastrians and other less familiar major faiths were well established before the Lord Jesus arrived as the Messiah and given some respect in the documents.
Islam came well after, lacking the dignity of the above but akin to heresies such as Pelagianism and Arianism .

Islamophobia is when you don't know any Muslims yet believe that they all want to enslave, kill, rape or conquer you. It IS Islamophobic to believe that even peaceful Muslim people are really all liars and deceivers waiting to enslave rape or kill you. How lacking in love is such blatant demonization of one religion and its adherents! It IS Islamophobic hatred to believe that Muslims all believe in extreme fundamentalist sharia law or want to force Americans and the world to be Muslim fundamentalists[ though wanting to peacefully convert others is a right] .And it is Islamophobic bigotry when mention of a Muslim comedian offends you "because ISIS exists". Guilt by association is bigotry.Perhaps the real reason is you don't want to know about a Muslim comedian is because you don't want reality to break in on your stereotypes of evil Muslims! What the commenters here are all expressing is evil, hateful ignorant 21 st century anti Semitism; directed at Semitic Islam and Muslim people, this time. ISIS IS being dealt with as it should be, that has nothing to do with the billion Muslims who are not ISIS and where was your empathy for the Muslim victims of ISIS, as it was not until they went after non Muslims did anyone care about ISIS. [ silence is complicity]. There are wars going on in many Muslim lands, We had wars going on in many Christian lands. Sharia law does not exist in Syria or Iraq or Egypt. Guilt by association is bigotry and hate. Bearing false witness is a sin.

Read the Quran and the Hadith. This is the basis for their beliefs. You do not have to read all of each but there are enough good translations to read the relevant parts.

For a Jesuit book on Islam that won't be recommended by America, the magazine, google

111 Questions on Islam Samir Khalil Samir S.J. on Islam and the West

By a Jesuit whose native language is Arabic.

"In jest, there is truth" --somewhere in King Lear.
The world would be a better place if everyone would spend one hour a day reading comedy instead of prayer-books.