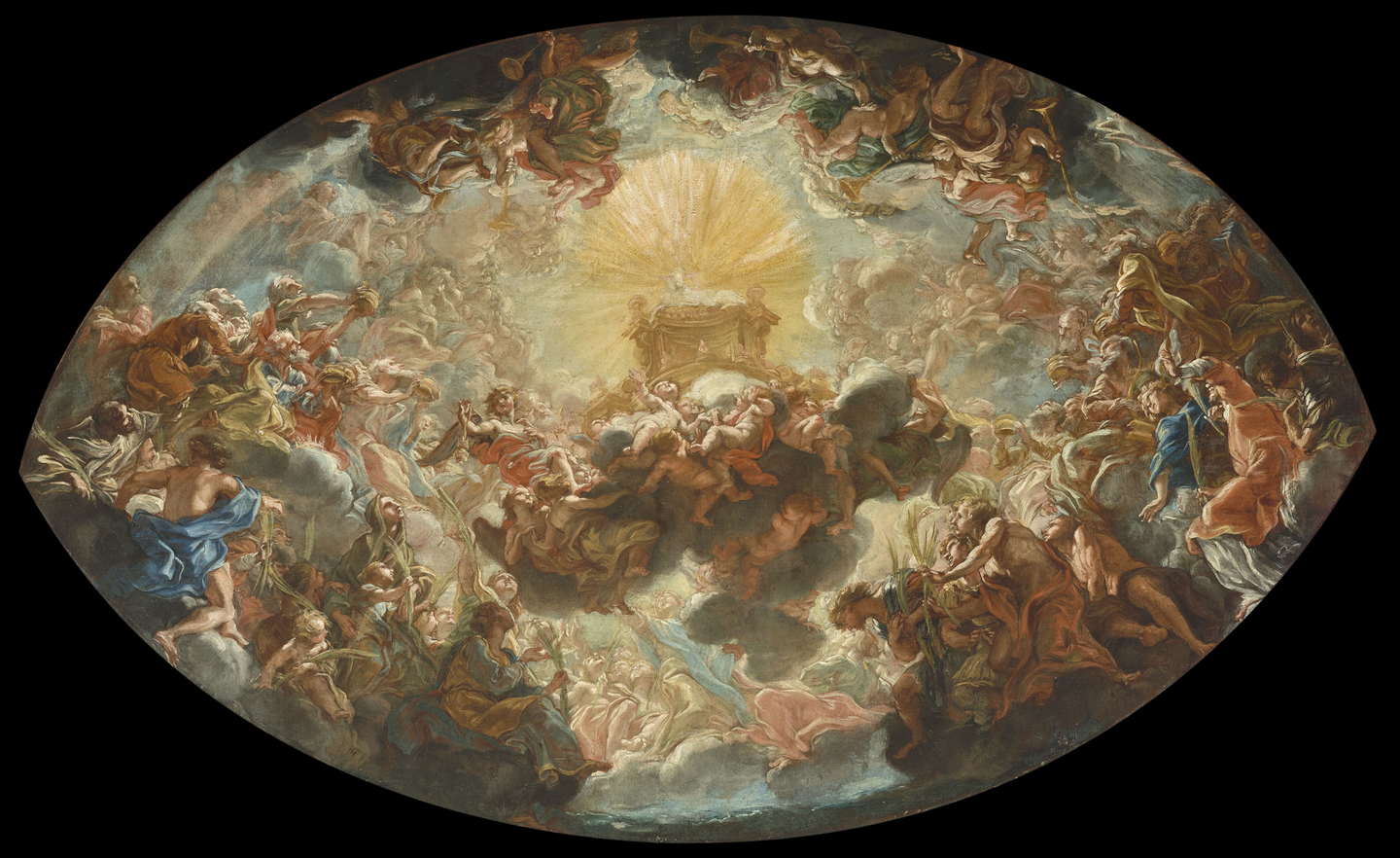 The art of Jesuit Rome comes to Connecticut

Fairfield University, whose patron is the Jesuit cardinal and theologian St. Robert Bellarmine, is celebrating this year the 75th anniversary of its founding.

Linda Wolk-Simon, the imaginative and energetic director of the University Art Museum, had an audacious dream—indeed, she readily admits, it was “quixotic”—to bring to Fairfield the magnificent marble bust of Bellarmine sculpted by the young Gian Lorenzo Bernini. One problem was that the bust resides high in the apse of the Church of the Gesù, the mother church of the Society of Jesus, in Rome. Another was that it had never left Rome and there were no immediate plans for it to do so (if the Italian government had any say in the matter—which it did).

Bernini’s magnificent marble bust of St. Robert Bellarmine had made its way to Fairfield University.

How it finally made its way to Fairfield, helped along by a letter from the new superior general of the Jesuits and the tenacious dedication of Ms. Wolk-Simon, is best heard directly from her during a visit to this imposing exhibition. And visit it you should! As Philippe de Montebello, director emeritus of the Metropolitan Museum of Art, confesses: “If I were still director of the Metropolitan, I would be jealous of Fairfield doing this show. It’s simply incredible.”

No doubt the star of the show is that moving sculpture of Bellarmine: moving both for its effect upon the observer and for its pulsating vitality. As Ms Wolk-Simon rightly claims, Bernini breathes life into his creation: “marble metamorphosed into fabric and flesh.”

But this is a multidimensional exhibition, and the star is surrounded by a rich supporting cast. Over 50 objects from museums in Europe and America give the exhibition artistic and historical depth. There are bronze statues of Ignatius Loyola, Francis Xavier and Teresa of Avila, all three canonized at the same time in 1622. There are oil paintings of Ignatius and Francis that began to craft a new hagiographical imagery, a visual language that missionary Jesuits would spread throughout the world. And rare volumes of the writings of Bellarmine help create a sense of time and place: Rome in the fervor of Reformation and Renaissance.

But what is unique about this exhibition, in my view, is that it fosters and makes possible a compositio loci—the “composition of place” that Ignatius recommends in his Spiritual Exercises. It is the church itself, the Gesù, (or to give it its full and suggestive name, Il Santissimo Nome di Gesù—The Most Holy Name of Jesus) that provides the living context and organizing principle for the individual pieces.

The exhibition encourages the viewer to enter imaginatively and contemplatively into the space of the church.

The exhibition encourages the viewer to enter imaginatively and contemplatively into the space of the church, not merely as an artistic wonder (which it certainly is) but as the theater in which the drama of human salvation is depicted and enacted.

We can examine close up the richly embroidered chasuble of Cardinal Alessandro Farnese, who funded the building of the church and imperiously imposed his own architectural preferences (and architect) on the sometimes reluctant Jesuits. We contemplate the intricate cartegloria, the altar cards containing some of the prayers of the Mass, emblazoned with gems and held by sturdy silver and bronze angels that must have dazzled viewers in the play of candlelight.

We also catch a glimpse, through an early 17th-century engraving, of the still barren vaulted nave and the unembellished apse, decades after the church’s consecration. Here Bernini enters the story of the decoration of the Gesù once more. The now famed artist had become a frequent participant in spiritual exercises at the church and an intimate of the then Jesuit superior general, the influential Gian Paolo Oliva. Bernini prevailed upon Oliva to entrust the commission for frescoing the nave and the apse to the young and relatively unknown Giovanni Battista Gaulli. Bernini pledged to stand surety for his disciple’s work, and he aided the young artist by both drawings and advice.

It proved to be an inspired choice. Two magnificent paintings in the exhibition attest to Gaulli’s genius: the model for the nave fresco depicting “The Triumph of the Name of Jesus” and the model for the apse portraying “The Adoration of the Lamb.”

The former is an extravagant and dramatic achievement of the high Baroque. The central focus is the radiant Christogram, IHS, representing the initial Greek letters of the name of Jesus, the chosen monogram of the Compagnia di Gesù, the Society of Jesus. Surrounded by a nimbus of angels, the Holy Name draws by its luminous power the blessed and repels the demonic and damned, who seem to be tumbling down upon the craned necks of the spectators.

No less dramatic, but suffused with heavenly harmony, is Gaulli’s painted model of the apse fresco. In many ways this fresco of the Lamb once slain, who now reigns triumphant, anchors the church building and the entire drama of salvation it enshrines. As the devout worshiper contemplates the scene, one can imagine him or her uttering the prayer for obtaining divine love that culminates Ignatius’ Spiritual Exercises.

To speak personally, however, the work in this exhibition that most excites my wonder is the oil altar painting by Domenichino, executed shortly after the canonization of Ignatius. It portrays in vivid colors Ignatius’ vision at La Storta, near Rome, as he and his first companions made their way to the city in order to secure the pope’s approbation of their pioneering venture. If the Bernini bust of Bellarmine is the artistic highlight of the exhibition, this painting is its spiritual heart.

Domenichino gives palpable immediacy to the vision. A fully incarnate Jesus points to his cross, as an equally tangible Father gestures toward the pilgrim who gazes rapt in prayer. Unspoken but implicitly evoked are the words of Jesus, “I wish you to serve us,” and the Father’s assurance, “I will be propitious to you in Rome.” Thus confirmed, Ignatius proceeds into the city that he and his Company will transform.

A ministry in art: The Jesuits who bring a religious lens to the arts
Edward W. Schmidt, S.J.

From this vision flows all that we have seen in this exhibition and in the church that it so wonderfully conjures for the viewer. For the miracle of Ignatius is to have recovered the ever ancient and ever new beauty of the Gospel at the very beginning of the modern age and to have envisioned a society that in its many and varied works, theological and pastoral, pedagogic and artistic, rekindled anew the Christic imagination. All these endeavors center on the Most Holy Name of Jesus—not merely the church of the Gesù, but the very reality it symbolizes. For it is the Holy Name that the Company of Jesus exists to celebrate and to serve—without which it would lose its very raison d’être.

At the luncheon formally opening the exhibition, the consul general of Italy remarked on the amazing dedication that brought a quixotic dream to fulfillment. He concluded by suggesting that now “all roads lead to Fairfield.” An astute diplomat, he was being only partly hyperbolic.

“The Holy Name. Art of the Gesù: Bernini and his Age” is on exhibition at the Fairfield University Art Museum from Feb. 2 to May 19.