Review: “The Phantom Thread” confronts the mystery of other people

Review: “The Phantom Thread” confronts the mystery of other people 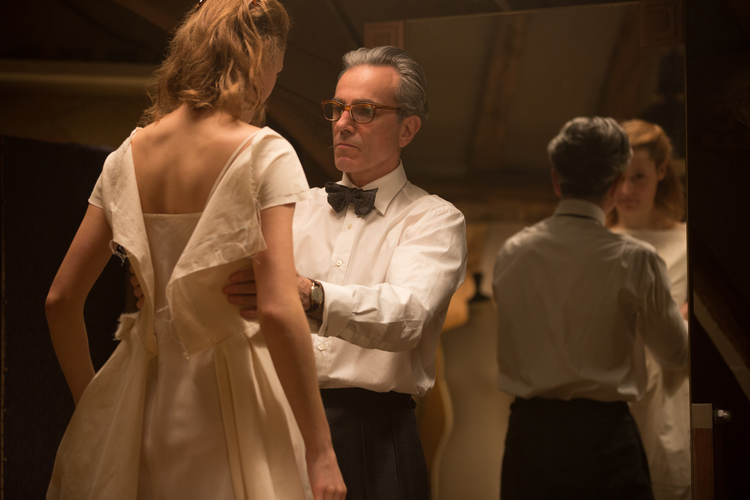 Much of the response to Paul Thomas Anderson’s perversely beautiful “The Phantom Thread” has been, and will be, about its sumptuous, elegant surfaces: The dresses created by the celebrated postwar couturier Reynolds Woodcock (Daniel Day-Lewis); the stunning décor of his ’50s London townhouse; the light; the colors; the manners; the insistent good taste.

But while much of the film is about the pursuit, and the business, of aesthetic perfection, it’s also about the way surfaces are used for concealment; the art of subterfuge, albeit under the most gorgeous camouflage. To see it as merely beautiful is simply not to see it.

“The Phantom Thread” is a mystery about people: Reynolds; his martinet sister, Cyril (Lesley Manville), and his new lover, Alma (Vicky Krieps), a European of unspecified nationality whose enigmatic expressions place her somewhere between a Rossellini heroine and a Renaissance Madonna, but either way a refugee.

To see “The Phantom Thread” as merely beautiful is simply not to see it.

It is a few years after the war, and asking people what they did to get through it wouldn’t be polite, and it only comes up here and there and you don’t wonder about it until later, anyway. You do wonder how Alma is going to deal with a temperamental genius like Reynolds. Later, you realize she possesses a genius of her own.

Anderson has created for himself—and to some extent by himself (he directed it, wrote it and, though uncredited, shot it)—a work through which he can freely exercise his gift for ecstatic cinema, never mind how banal or understated a scene might seem to be: Reynolds conducting his morning ablutions, for instance, shaving luxuriously, taming his hair with a pair of brushes, dressing to the nines just to have breakfast. It’s gorgeous, on a purely aesthetic level, though none of it is an indulgence, because what Reynolds is about is presentation—branding, if you will. His fastidiousness, his delicate concern for detail, begins with personal grooming; it ends with women—his customers, all wealthy, wilting flowers—hoping to God they can measure up to his dresses.

Alma is something else. We have seen how Reynolds treats women— Cyril is accustomed to dismissing those with whom her brother has become bored—and we see early on how he operates. Having completed a commission for one of his regulars (a virtual cameo by the wonderful Gina McKee) he motors out to the country at dawn in his vintage roadster, stopping for breakfast at the small inn where Alma works. His breakfast order is pure flirtation. “A Welsh rabbit. With a poached egg on top. Not too runny. Bacon. Scones. Butter …cream …. jam. Not strawberry.” Anything else? Coffee? Tea? “You have lapsang? A pot of lapsang, please.” And some sausages.

It’s a psychological drama, a study of how one defines oneself.

The message, received quite happily, is that he doesn’t want her to leave his side. And despite what will be his best efforts later, she doesn’t.

But “Phantom Thread” isn’t a two-hour love story about two mismatched people (who are actually matched quite perfectly). It’s a psychological drama, a study of how one defines oneself, and a film whose screenplay teases out just enough information to keep us guessing. Other than his ruminations about his mother (who, ultimately, is central to the entire story), we don’t know so much about Reynolds. He made the dress for his mother’s second wedding, a task so fraught with superstition that he could get no help outside of Cyril (who never married, thus affirming all the superstitions). He sews things inside the clothes he makes—embroidered good wishes, coins and, in the case of his own jacket, a lock of his mother’s hair, next to his heart. Alma takes it all in—as we will see.

Some have critiqued “The Phantom Thread” as misogynistic or exploitative—while hardly a child, Alma is considerably younger than Reynolds, and such matchups are under increased scrutiny. But Alma is also a symbolic character. As she works to penetrate Reynolds’s heart (how she successfully does so cannot be revealed without blowing the whole movie), she develops in a way that this writer can only see as paralleling the archetypal stages of the Jungian anima: Eve, Helen, Mary (as in the Virgin) and Sophia. If this is, in fact, intentional on Anderson’s part, it implies that Alma is meant to be seen not just as the lover who upends the life of the artist, but the female aspect of his personality, the thing that makes him what he is.

What is he? Played with predictable virtuosity by Daniel Day-Lewis (is he really retiring? one hopes not), Woodcock may be, at various times, selfish, moody, vulgar and cruel, but he’s never portrayed as less than stupendously gifted. One might want to see “The Phantom Thread” as an autobiographical portrait of artistic genius—I’m willing to; I think Anderson deserves it. (The movie’s initials would be P.T., if that’s not overthinking it.) But at the very last, the movie is a celebration of all things female, and that includes the fertile part of Woodcock’s troubled subconscious.