Whether it’s Thor’s Asgard or our America, the history you’ve been taught is a lie 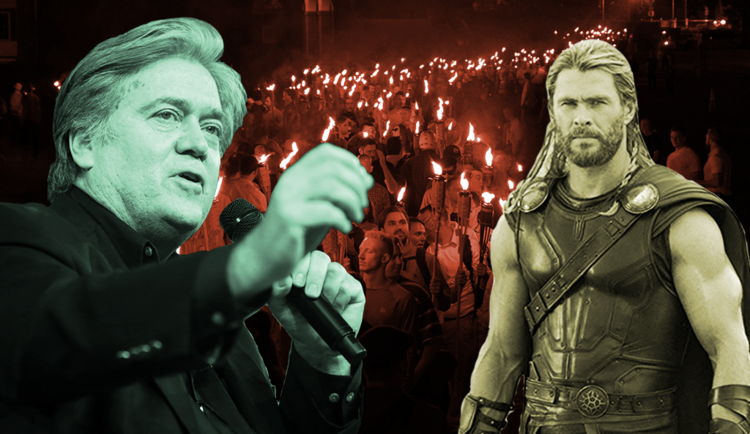 “Thor: Ragnarok” is more than just another superhero movie. Taika Waititi, the film’s director, gives us an entertaining film with a powerful and needed message: ignore history at your peril.

Promos and teasers for “Thor” promised an epic battle between Chris Hemsworth’s Thor and the Goddess of Death, played by Cate Blanchett. I love superhero movies, but I never read the comics. So I was surprised at the revelation that Hela, the film’s villain, is no outsider invading the realm of Asgard, but the first born daughter of Odin coming to reclaim her birthright.

Sibling rivalry is a consistent theme in Thor mythology, but Hela is no Loki jockeying for attention. With an insatiable desire for power and conquest, Hela is a violent reminder of Asgard’s past. Asgard’s dominance over the nine realms was not accomplished through Odin’s diplomatic skills; it was built through Hela and Odin’s violent conquest. When his own lust for power subsided, Odin imprisoned the uncontrollable Hela and papered over his own violent rise to power. In “Thor: Ragnarok,” Thor and Loki learn that everything they were told about Asgard and their history is a lie.

“Ragnarok” is clearly a commentary on colonialism and the perennial desire to whitewash history. Yet the film is also a critique of the United States in 2017. Indeed, it is a direct attack on the alt-right and white supremacist’s fascination with the perceived racial purity of the Norse gods and Viking history. Salon’s John Semley argues this movie could be “a hammer to the face of the alt right.” The first movie in the Marvel franchise directed by a person of color, “Thor: Ragnarok” exposes both the violent history and delusions of white supremacy. (The film also included Marvel’s first L.G.B.T. character, Valkrie, played by Tessa Thompson; Valkyrie is white in the comics, but Waititi chose an actor of color for the role.)

“Thor: Ragnarok” is a direct attack on the alt-right and white supremacist’s fascination with the perceived racial purity of the Norse gods.

Hela wants to make Asgard great again. Because Odin refused to face his (and Asgard’s) violent, oppressive and genocidal past, Thor and the people of Asgard are confused and ill equipped to process the present moment. How many Americans were shocked by Charlottesville? The persistent desire to proclaim progress and to profess the United States’s greatness requires papering over the truth of the nation’s rise to dominance: conquest of indigenous peoples, slavery, Jim Crow, lynching. Just as Odin could not face his own past, so too the myth of the kindly General Lee persists. The recent rise in hate crimes is a tangible reminder that racism, white supremacy and hatred have not disappeared.

In Christian ethics, restorative justice prioritizes truth telling as a necessary condition for reconciliation. As Archbishop Desmond Tutu often reminds us, national amnesia is not an option if one wants to move forward. There are many examples of racial injustice deeply rooted in a history ignored or glossed over. From Standing Rock to Flint, Mich., to Puerto Rico, restorative justice is impossible without telling the truth.

In the end (spoiler alert) Thor embraces people not dominance, as the once-mighty Asgardians become refugees headed to earth where they literally become illegal aliens. Amidst the calls to “make America great again,”“Thor: Ragnarok” reminds us to take a hard look at our history and the very notion of greatness. A good place to start is a new initiative by Bryan Stevenson and the Equal Justice Initiative, Lynching in America. Asgard isn’t the only empire built on convenient myths.

America, the history you’ve been taught is a lie.

What lies have we been taught? The history I was taught in my Christian Brother's high school and Jesuit college was pretty much in sync with what we know today.

The persistent desire to proclaim progress and to profess the United States’s greatness requires papering over the truth of the nation’s rise to dominance: conquest of indigenous peoples, slavery, Jim Crow, lynching.

All of these things I was taught in my Catholic school education. So what papering over was there? Or are these things being papered over today? I doubt it.

I think Ms.Clark does not understand American history and should be careful when commenting on it and protesting that the truth is not being told. (changed to add American as a modifier of history as well as additions to point out the obvious.)

Any mention of white supremacy is a red herring. Yes, there was a racist past but slavery and serfdom were the norm in the world in the late 1700's and early 1800's. There were efforts to eliminate slavery in the mid to late 1700's in the colonies/United States and it eventually culminated in the Civil War. Its certainly does not describe the present in any meaningful way. The mention of "Charlottesville" gives it away which was not about racism but politics.

A little truth telling would mention that there is relatively little racism today and maybe emphasize that about 400,000 union soldiers died in the civil war which everyone today acknowledges was about abolishing slavery.

How patronizing, or patriarchal, of you. Ms. Clark's understanding of history seems quite in touch with reality. Especially regarding the colonialism and whitewashing of Native American genocide continuing right up to the end of the last century with intentional sterilization of Native women by white doctors who thought they "knew best" and sterilized them against their will, often without informing the Native women they were being sterilized. There are many truths about White America's unChristian oppression of people of color that aren't told and aren't taught in most American schools, or which are whitewashed into some paternalistic untruth about how whites cared for people of color and that they were "better off" enslaved as non-people.

Thank you Dionys for highlighting one of the many examples in the background of my piece. ~Meghan Clark

Hah! Thank you, Stanley, for bringing some humor.

Wow. I would hate to see any movie with the author if just to be spared a lecture! If one meets a person or watches a movie and first and foremost note skin shading or a need to know their sexual orientation (boorish behavior indeed) I submit this is where bias begins. Racism which is a subset of bias, works both ways in that it is not a reflection of the individual person in question but a projection of one's own individual bias upon this person either good or bad. . Was the movie good or bad? Was the director good? Congratulations! Was the director of color? Oops, there goes that ingrained view of a person judged by their skin. I pray that I never look at anyone I encounter as anything other than a human being. Now disagreements, on the other hand, are not necessarily a sign of bias. And the terms "racism" and "person of color" tend to be opportunistically used for personal advancement by those who are well enough connected. Thus "racism" in the cities is much more of an economic disparity than racism or has no one heard of the equally grinding poverty in Appalachia. Perhaps the term should be "person's of power". Real change does not involve the usage of simplistic titling as simplistic platitudes. And again, this "new initiative" will be quite the money maker I am certain....So, seriously, have a Blessed Day.

"I pray that I never look at anyone I encounter as anything other than a human being." How sad for you, then, to journey through life without understanding the complex history of everyone you meet, then. Meeting a human being on this earth is the same as encountering Catholicism -- they have a unique history that informs who they are, how they are in the world, their experience in the world and what challenges they face. Unfortunately, but truthfully, this also means the color of their skin directly informs their history. Whitewashing that history by saying "I don't see color" or "I just meet them as humans" erases the truth of their history of oppression, ongoing and past, in the world and doesn't acknowledge them as the whole human being they are or the power differential they experience simply by the color of their skin. How ironic that you accuse others of being "well enough connected" while asserting your privilege of being able to speak from a position of power to further oppress those who are already oppressed.

"and first and foremost note skin shading or a need to know their sexual orientation (boorish behavior indeed) I submit this is where bias begins" In truth, bias begins in the way that you approach this, and seemingly everything -- by assuming their heritage, sexual orientation or life experience from a position of privilege and power.

★ ★ i am currently simply creating $15k to $18k each month and also the actual quantity of my last month cheque was $16598 from this job. i'm doing this job in my half time, affirmative solely in my half time. i need you all to hitch this job currently and begin creating real money on-line at once by follow directions on this journal.....

does America ever say anything positive about the U.S.? The constant drip drip drip of negativity really wears one down.

You may not know it (perhaps because you don't have the right ancestors), but being Catholic in America has ALWAYS involved being "counter-cultural" and against the mainstream. The Jesuits of America are simply doing, in writing, what their brainier Irish, Polish, German, French and Italian ancestors ALWAYS did, in order to stay alive and to stay faithful, in this country.