The virtue of a Catholic journalist: Raymond Schroth, R.I.P. 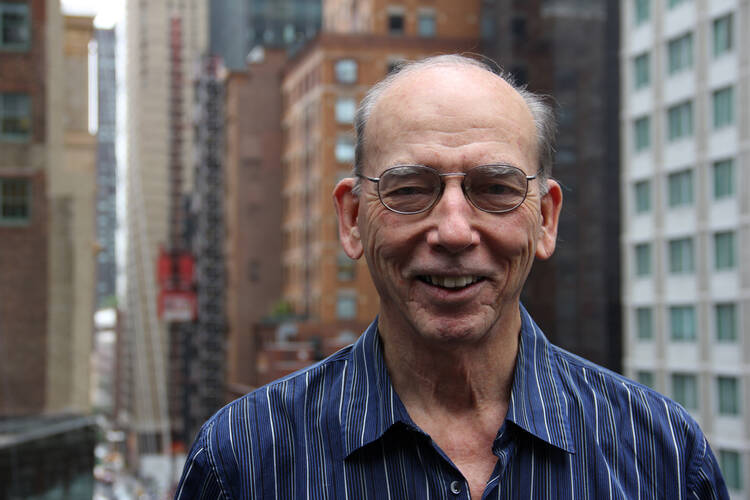 Editor's Note:Raymond A. Schroth, S.J., died on July 1, 2020. This Of Many Things column was written upon his retirement from America in 2017.

The issue of America dated March 9, 1957, includes an article written by a young second lieutenant assigned to a U.S. Army anti-aircraft battalion in West Germany. It was the height of the Cold War. A national draft meant, in the words of the author, that “the Army will take from six months to two years from nearly every man in our generation.” This G.I. from New Jersey was writing, he told us, because he wanted to “explain a soldier's life” for America’s readers, “so that civilians may appreciate him better, and that the recruit may get an idea of what to expect.”

Raymond A. Schroth, S.J., has been telling people’s stories ever since. In the 60 years since that first byline, Father Schroth has contributed more than 60 features to these pages, chronicling the most important events in the life of this country and the church throughout the world, with intelligence, compassion and wit, as well as good old-fashioned shoe leather reporting. And in between, he found the time to pray most mornings in St. Patrick’s Cathedral.

The author of eight books, including a history of The Brooklyn Eagle newspaper and acclaimed biographies of Robert Drinan, S.J., the first Jesuit elected to the U.S. Congress, and Eric Sevareid, the path-breaking television journalist, Father Schroth taught American literature and journalism at six universities, including Fordham, New York University, the College of the Holy Cross, Rockhurst College and Loyola University New Orleans. For the last seven years, he has been our literary and books editor, the only person to have served as the books editor of both America and Commonweal. Under his leadership, America’s book reviews—many written by Pulitzer Prize-winning former students of his—have garnered several first-place awards from the Catholic Press Association.

The pope and the press: a surprisingly friendly relationship
Raymond A. Schroth, S.J.

Yet while he is a gifted editor, at heart Ray is a reporter. And while he has interviewed, mixed and mingled with the famous and the infamous, he has never forgotten that an important part of a reporter’s job—especially for a Catholic journalist—is to tell the stories of ordinary people, the folks in the pews or on the streets. To tell their stories, he has reported from 14 countries. He was one of the first reporters on the scene in the aftermath of the riots in Detroit, 50 years ago this summer. He was gassed by the Chicago police while reporting from the 1968 Democratic National Convention. He ventured into Watts in the scorching summer of 1966 to interview drug addicts, and he reported in 1993 from a Syrian ghost town in the Golan Heights that 20 years earlier had been systematically destroyed. For Ray, finding God in all things, as the old Jesuit chestnut goes, means being a first-rate journalist. And what he once said of Eric Sevareid could just as well be said of him: “His most significant achievement was his ability to explain to Americans day after day who they really were, where their country was.”

When he retires from the editorial staff later this month, Ray will take with him a part of America’s heart as well as its living history. I am pleased to report that he will continue to make occasional contributions (just last year, in his ninth decade, he reported from Russia for these pages) and, in recognition of an association that spans more than half of the magazine’s history, the board of directors of America Media have bestowed on him the rare honor of naming him an Editor Emeritus of America.

We will miss him at our morning news huddle. Ray and I haven’t always seen eye to eye, and he’d be the first to tell you that. But he’s also always been the first to tell me. If he didn’t like where something was headed or what an author was saying, he’d knock on my door and say, “Got a minute?” I have known a lot of journalists in my life, folks who talk about transparency and honesty and hard work. Ray brings those qualities to his reporting because they are simply who the man is. “The first step in teaching moral values to young journalists,” he once wrote, “is to get them to feel pain—not their pain, the pain of others. From that, other virtues—compassion, skepticism, courage and the like—might follow.” Ray would probably tell you that’s just what his dad, Raymond Schroth Sr., an army veteran and reporter himself, taught him growing up in Trenton.

Bon voyage, Ray. You are always welcome in these pages. On behalf of your colleagues, past and present, as well as the generations of readers you have touched through your work: Thank you! And thanks be to God.

Matt Malone, S.J., is editor in chief and president at America.

As one of the thousands – tens of thousands? – of university students mentored by Fr. Raymond Schroth, S.J., I second America magazine’s praise for its soon-to-retire books editor (Aug. 7).

I first encountered Fr. Ray in his Fordham University journalism class in the late 1960s. After a couple of weeks, he kindly advised me to go for a letter grade instead of the pass-fail option I had timidly selected. He also urged me to start submitting my work for publication.

Those words inspired a 40-year journalism career that has proved fascinating and challenging. I retired three years ago but keep my hand in the game with projects such as occasional book reviews for America.

Thank you, Fr. Ray, and Godspeed in your next adventures!