Teaching Ned Stark to play a Jesuit priest for the BBC 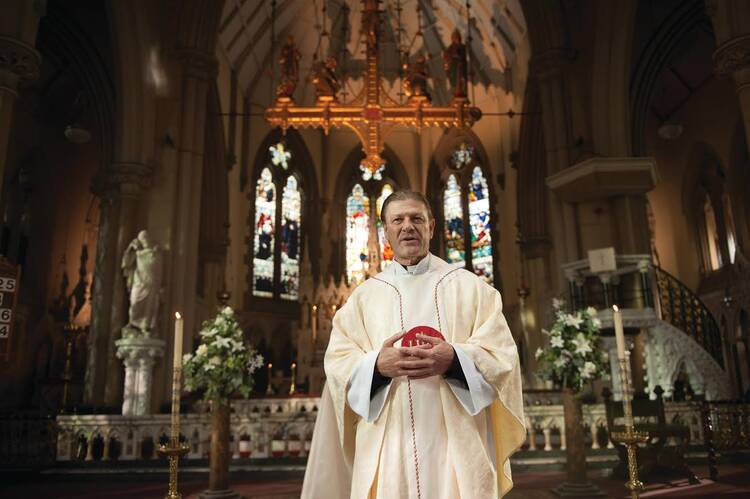 This essay originally appeared in the British journal Jesuits & Friends.

This spring, a new six-part television drama about a parish priest based in the north of England will be screened on BBC One. “Broken” deals with heart-wrenching struggles faced by a handful of parishioners, plus Father Michael Kerrigan’s own human vulnerability. Sean Bean (“Sharpe,” “Game of Thrones,” “Lord of the Rings”) plays the lead; and St. Francis Xavier’s Church in Liverpool provided the setting for the northern parish, St. Nick’s.

“Broken” was written by Jimmy McGovern, a well-known Liverpool writer and alumnus of St. Francis Xavier’s College. The series had been germinating with him for some three decades, and he was making changes even as the filming took place, so that it was as up to date as possible. It has been produced by Liverpool-based LA Productions, led by Colin McKeown; and its two directors, Ashley Pearce and Noreen Kershaw, were meticulous in their preparation, determined to make the personality and humanity of Father Michael come over with total authenticity.

They wanted to know what it was like to be a Catholic priest working in an urban environment in the early 21st century. It starts in the guts, I told them; then it goes through the heart of a man who knows his own strengths and weaknesses, vulnerabilities and personal history. Eventually, it comes out in a compassionate understanding approach, with open eyes, listening ear and heart, taking individuals as they come, no matter what the situation.

It was very satisfying to see how Sean grew into the part and how seriously he took his role to be a man gifted with priesthood.

Over nine full 12-hour days of filming, our own church of St. Francis Xavier became a star in its own right. Actors, extras and directors alike loved the place, saying it had the “Wow!” factor. Sean Bean came with his personal assistant to our Sunday Mass the day before shooting began, to get the feel of the place and to see how I led our family Mass. He had to know how to be the celebrant at the Eucharist, and I went through the script beforehand to make sure that all the texts used were the current ones word-for-word; I then quietly showed Sean how to lead the Mass at various stages. It was very satisfying to see how Sean grew into the part and how seriously he took his role to be a man gifted with priesthood.

We loaned the company a white chasuble when we were inundated one day with over 200 extras—including 40 children—for a First Communion Mass. Sean was a quick learner, and easy to work alongside. At one point, he even came to me and said: “Some children are not doing it right, Denis, receiving Communion!”

Among the moving individual stories that unfold in the series, Sean had to hear confession, take communion to the sick and dying, and deal with the dead. We filmed in a local cemetery, a hospital mortuary, and a funeral home where a mother was grieving over her dead young son’s body. All the details were beautifully staged, complete with crucifix, rosary and candles. I was constantly being asked: “How do we do this, Denis?” or “Have we got this right?” And there were often quiet asides with Sean, just to boost his confidence in his amazing privileged role. The odd pastoral tip—maybe adding a word or two to the script—helped to make it even more human and down to earth. Sometimes a touch of the person or body enhanced the depth of humanity in a particular scene. And on those pastoral situations when words don’t matter, sometimes only a hug will do.

What was striking for me was the immense trust put in me by key members of the team, beginning with Jimmy McGovern. Jimmy wanted everything in every way to be as correct as possible, not least in celebrating the Eucharist, which is key to the whole series. Any priest is meant to live with a Eucharistic mind and heart, centered on the four aspects that Jesus spoke of when initiating the greatest gift he could give. Jesus took the bread, Jesus blessed the bread, Jesus broke the bread, Jesus gave the bread. Only by accepting his own brokenness can any priest truly live a Eucharistic life and echo Jesus in his compassionate approach to those whose lives he is privileged to reach out to. This comes across strongly in this TV series.

Only by accepting his own brokenness can any priest truly live a Eucharistic life and echo Jesus.

For me as a priest who has worked in parishes up and down Britain, from Edinburgh to Bournemouth, working on “Broken”has given me fresh hope and encouragement, for it portrays the priest as fully-earthed human being. His awareness of his own vulnerability and heartfelt struggles enables him to bring deep compassion to those whose lives he is privileged to reach out to and touch each day. When the six episodes are screened—not only on BBC One but reaching audiences around the globe—it will be fascinating to see the impact on the way the priesthood is viewed in the Catholic Church in 2017. 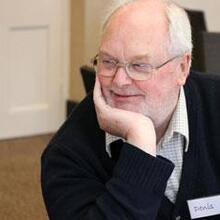 Ok, I'm in. How do I watch this series in Pittsburgh?