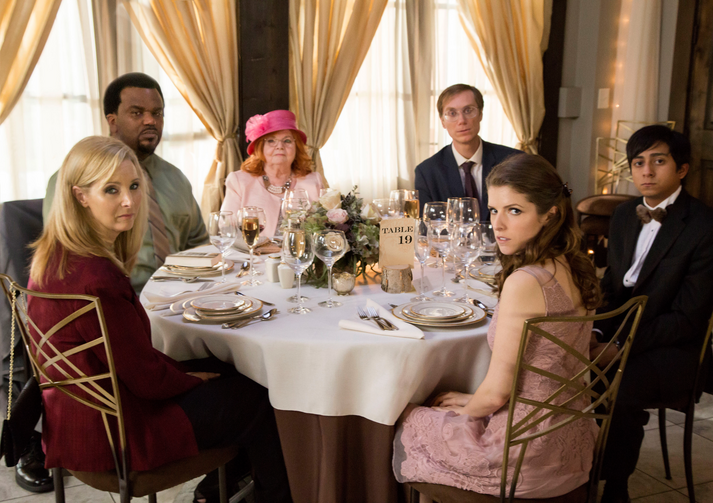 The charming misfits of 'Table 19'

With wedding season fast approaching, “Table 19,” a romantic comedy about a group of oddballs at a wedding reception, serves as entertaining mental preparation. The film presents several wedding-movie tropes—a picturesque but inconvenient venue, a drunk divorcée mother of the bride, a notoriously promiscuous cousin, a rambling best man’s speech—but this is not a predictable chick flick. More “The Breakfast Club” than “Bridesmaids,” “Table 19” is sweet, fun and poignant.

Anna Kendrick stars as Eloise, a moody girl attending her oldest friend’s wedding even though the bride’s brother, who is the best man, recently dumped her.

Having been removed from the head table, Eloise finds herself at the last table in the room, number 19. Joining her are colleagues of the groom’s father, a family friend’s teenage son, the bride’s convict cousin and the bride’s almost forgotten childhood nanny. Each of these characters is struggling. The colleagues’ marriage is on the rocks; the teenager is hopelessly awkward around women; the convict is on bad terms with his family; and the nanny seems to be alone in the world except for her adorable dog, Ringo.

Each table member has an engaging, sympathetic story arc, and the talented cast—featuring Lisa Kudrow, Craig Robinson and Stephen Merchant—makes for an appealing ensemble. As Eloise tries—and fails—to ignore her ex, the rest of the table sets out to remedy the struggles in their own lives.

“Table 19” depicts the beauty of overcoming unexpected yet ordinary challenges that accompany human relationships. It explores the idea that love is difficult. And that true love means choosing the people who disappoint you, because that’s who you’re willing to forgive.

Like many movies in this genre, most of the funny bits are in the trailer, but this film brings a surprising amount of heart to the table. As the characters reveal more and more about themselves, the audience is reminded not to rely on first impressions, and to keep an open mind, especially when things aren’t going your way.

“What if you came here for a different reason today?” Jo, the former nanny, asks Eloise, “What if you went away with something better?”

“Table 19” is a celebration of small victories, like receiving a meaningful compliment, or creating a romantic comedy with  real charm.

Teresa Donnellan is an O’Hare Fellow at America.