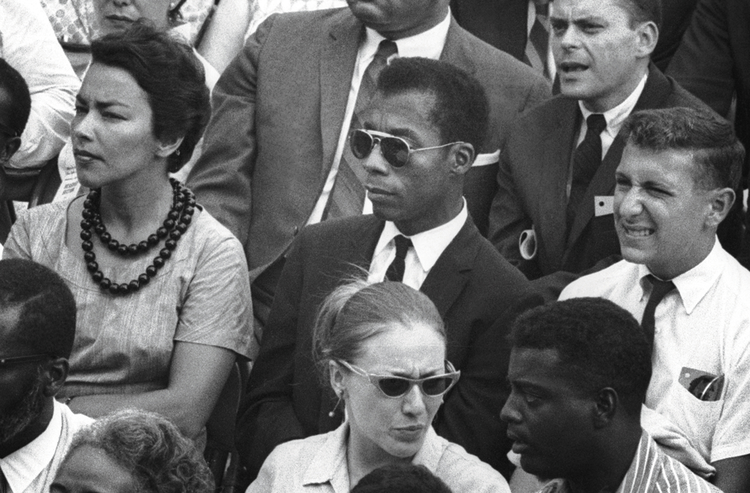 James Baldwin was the author of The Fire Next Time among other works. He died in 1987 (Photo Credit: Dan Budnik)

In 1987, at the age of 63, James Baldwin died of cancer in Saint-Paul-de-Vence, France. At the time of his death, the author was working on Remember This House, a memoir on the civil rights movement framed through his relationships with Medgar Evers, Martin Luther King Jr. and Malcolm X. In a 1979 letter to his editor, Jay Acton, describing his vision for the book, he wrote, “I want these three lives to bang against and reveal each other.” The memoir was never finished.

In I Am Not Your Negro, the Haitian director Raoul Peck uses the unfinished manuscript to offer a look into Baldwin’s work and to examine the present state of race relations in the United States. Divided into six parts, titled, “Paying My Dues,” “Heroes,” “Witness,” “Purity,” “Selling the Negro” and “I Am Not A Nigger,” the film juxtaposes art and various protest movements. With Samuel L. Jackson as narrator, Peck switches from scenes of Hollywood films, like Sidney Poitier’s “In The Heat of The Night,” to news footage of key moments in the struggle for civil rights, like the Montgomery bus boycotts. This contrast is most evident when the director pairs Baldwin’s voice, like his 1965 Cambridge University debate against William F. Buckley, with footage of 21st-century protests like the 2014 unrest in Ferguson, Mo., following the fatal shooting of Michael Brown. In one striking scene, we watch images of African-Americans standing, staring quietly at the camera, as Baldwin proclaims, “The story of the negro in America is the story of America.”

This year will mark the 30th anniversary of James Baldwin’s death. With “I Am Not Your Negro,” Peck connects the civil rights movement of the 1960s with its 21st-century analogue, the Black Lives Matter movement, and demonstrates that the issues present in Baldwin’s America are still very real today. He highlights the different realities of white and black Americans, emphasizing Baldwin’s claim that “The world is not white; white is [merely] a metaphor for power.”

The history behind the SCOTUS ruling on funding religious schools: Blaine Amendments
Could the ruling really mark the end of Blaine amendments?
Nicholas D. SawickiJuly 01, 2020

Podcast: Will the new commission on women deacons turn out any differently from the last one?
This week on “Inside the Vatican," Colleen Dulle speaks with Phyllis Zagano about the church’s history not only of ordaining women deacons, but also the conversation around ordaining them again.
Colleen DulleJuly 01, 2020