How the theater helps us to survive, and to challenge, politics 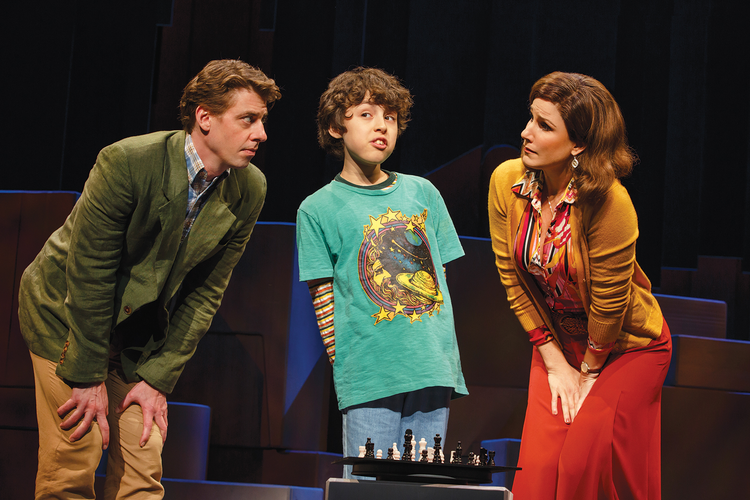 The action of a play is always happening now, no matter when it is set. The actors may be wearing 18th-century periwigs, as they are in “Les Liaisons Dangereuses,” or 1920s suits and frocks, as in “The Front Page,” or 1980s workout garb, as in “Falsettos.” No matter how transporting their performances, the actors are irreducibly human beings, living through the same moment we are.

Maybe that’s why, when world events become pressing, the theater is a favorite refuge of mine. The theater is a kind of church where the roiling, uncontained thoughts and emotions of the day are brought into a room and processed, even purged, through a shared narrative experience. This was the case after the terrorist attacks of 9/11, and it is just as true now, at the sharply polarized precipice on which our republic finds itself.

Sometimes those outside forces even pierce the theater’s artifice, the “fourth wall” that ostensibly separates us from a play’s fiction. In the ebullient, wounding new revival of the ’80s-era musical “Falsettos,” the beleaguered Trina walks to the center of the stage and sings:

So tired of all the happy men who rule the world

The Broadway matinee of “Falsettos” I saw the day after the election marked not only the ascendance of Donald J. Trump but the demise of Hillary Clinton. In this moment, the actor playing Trina, Stephanie J. Block, had to pause there for a burst of applause, and a few of what seemed like her own tears mingled with Trina’s. This release of communal feeling—grief tinged with anger—was not out of place in a nervy, affecting musical about the struggle between sexual passion and family stability. “Falsettos” is continually torn between the chase for the thrill of romantic “love” and the compassionate, companionate agape love we grow into if we’re lucky and wise enough to recognize it.

For all the voice “Falsettos” gives to Trina’s desperation, it is the men who do the damage and most of the hard learning. The show’s ostensible lead, Marvin (Christian Borle), is a selfish gay man who manages to blow up both his marriage to Trina and his relationship with his lover, Whizzer (Andrew Rannells), only to be reeled back into a sense of responsibility toward his bar mitzvah-aged son, Jason (Anthony Rosenthal), and the AIDS-afflicted Whizzer.

But the show’s journey can also be read as Jason’s path to manhood, and not only because he ends up in a prayer shawl warbling in Hebrew. In this brightly drawn but uniquely sobering musical—whose angsty, convivial score and brittle, New York milieu often make it sound and feel like the shaggy-dog heir to Sondheim’s “Company”—a final embrace brings all the prodigals home, and it is hard not to notice that a child has led them there.

The contemporary resonances of “Les Liaisons Dangereuses” are less salutary. Adapted in 1985 from an epistolary novel by Pierre Choderlos de Laclos, the play is a toxic roundelay of sexual gamesmanship among aristocrats in pre-revolutionary France. As we watch the rakish Valmont (Liev Schreiber, never less than interesting even when miscast) scheme with the spidery Marquise de Merteuil (Janet McTeer, likewise compelling) in the name of both purported revenge and sheer pleasure, we may feel the waste of human potential and dignity in the face of lust and avarice. Or we may simply recoil from the unedifying spectacle of people behaving badly and tragically paying for it.

“Les Liaisons Dangereuses” too often falls into the trap built into any critique of decadence: It embodies the cynicism it means to attack. In one pivotal scene, Valmont enters the bedchamber of a young virgin, forcing a kiss on her and groping her genitals before doing worse. Though he is ultimately not rewarded for his violence, the audience gains nothing from witnessing this uncomfortable turn of events.

Bad behavior in the course of a worthy profession’s duty is the thrust of “The Front Page,” the 1928 comedy by Ben Hecht and Charles MacArthur currently receiving a lavish, mostly satisfying revival on Broadway. A long play with a slow build, as was the order of the day, the play hunkers down with a gaggle of wisecracking male reporters in a courthouse press room on the eve of a hanging. “The Front Page” centers on the attempted retreat by the star reporter Hildy Johnson (John Slattery) from the ink-stained ranks of the fourth estate to a more respectable career and marriage to a socialite.

Hecht and MacArthur both worked as reporters, and it is clear where their sympathies lie. They depict the press as holding the political machine and its craven mediocrities to blistering account, especially a dumb sheriff (John Goodman) and a corrupt mayor (Dann Florek). The director Jack O’Brien’s vivid production is notable for walking the tricky line between farce and thriller, and for the late-arriving star turn of Nathan Lane as a hard-driving, impolitic editor. In the hardboiled—if slightly self-congratulatory—vision of “The Front Page,” journalism is a bruising contact sport, not for the faint of heart, and certainly not for anyone with feelings so tender as love of family. Today we need clear-eyed, independent reporters more than ever, but surely they could use a good family leave policy as much as anyone else.

For plays that speak even more directly to our current moment, the seasoned theatergoer might look beyond Broadway. Lynn Nottage’s “Sweat,” at the Public Theater, is a hugely empathetic if somewhat formulaic examination of race and class among disenfranchised workers in Reading, Pa. Anna Deavere Smith’s “Notes From the Field” at Second Stage is another of her riveting civic documentary collages, in which she gives voice to a wide array of players along and around our nation’s disgraceful school-to-prison pipeline.

Best of all, though, is Qui Nguyen’s “Vietgone,” at the Manhattan Theatre Club, which imagines the story of his own parents’ meeting at a Vietnamese refugee camp in Arkansas in the mid-’70s as an irreverent, cartoonish romcom, replete with comic book fights, anachronistic hip-hop breaks and cinematic flashbacks. All this elaborate goofing is sneakily laying the groundwork for the most complicated and moving scene of the season: an interview between the playwright (played by Paco Tolson) and his father (Raymond Lee), in which the themes of home, family and the American promise ring with the fresh clarity of a new perspective. The story of the Vietnam War, which we too often use as a shorthand for “mistake,” has seldom been told on our stages from the point of view of the refugees and their children, actual human beings with ties to an actual place—not simply a myth of American shame. We could use more of that clarity and perspective, and not just on our stages.

@RobKendt
Show Comments (
1
)
Comments are automatically closed two weeks after an article's initial publication. See our comments policy for more.
William Rydberg
4 years 7 months ago
In my opinion comparing Mass to the Theatre could not be a poorer Analog... In the Mass, one literally is "at prayer" before his Creator. Trinity in Unity. One literally stands "naked" before God. In fact and in Mystery. The symbology of Theatre and especially the Janus Mask and is fraught with pagan ancient Roman religion and mythology. Above all, Catholics at Mass are never actors in a play. For the Mass is direct encounter in Mystery with Truth... in Christ,