Why are Catholics so mean on social media? 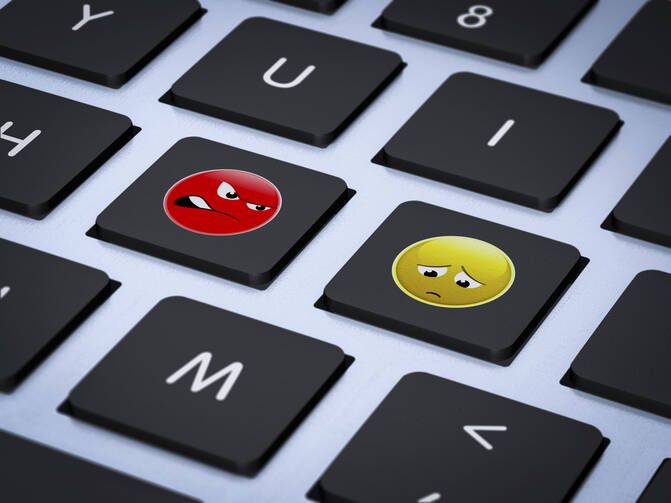 Why are some Catholics so hateful on social media?

The most common reactions to this question are these: First, “I know what you’re talking about. I see that all the time on Facebook!” Second, “I’m not on social media that much. What are you talking about?” And third, “Don’t be so sensitive. Criticizing doesn’t make someone mean.”

For those who don’t frequent social media, here’s a primer. Certain Catholics consider it their bounden duty to correct, admonish and attack others when they perceive something that offends their own religious sensibilities or deviates from the faith, as they see it. The journalist David Gibson recently highlighted “liturgy shaming,” in which evidence of supposed liturgical abuses are posted online, which prompts outraged Catholics to pen furious missives to offending priests or bishops. Eavesdrop on any gathering of Catholic journalists, and you’ll hear the same lament: I’m sick of all the hatred.

Whence so much hatred from supposedly religious people?

Recently I had a Facebook Live chat with Michael O’Loughlin, America’s national correspondent, who suggested a few reasons. The first two relate to everyone on social media; the third to Catholics. First, he noted, there is a lack of “nonverbal cues” on social media. If I say something in your presence that offends you, you’ll recoil. I’ll notice your reaction and presumably moderate my comments. Online, however, there are no “live” repercussions for saying hurtful things. Second, the anonymous nature of the web allows people to create social media accounts simply to spew venom. Third, Catholics have a “deep passion” for religion, so if you read or see something you disagree with, you are likely to defend your viewpoint vigorously—and may even be tempted to label someone “heretical.”

That last reason disturbs me the most. Once some Catholics decide that they alone have the correct interpretation of the faith, they seem to act as if God on their side, when, in fact, the topic may admit legitimate theological disagreement or even mystery.

Why are Catholics so mean on Facebook? Join us for a discussion with Fr. James Martin, S.J., and Michael O'Loughlin

A few weeks ago, for example, I tweeted out a brief reflection on the daily Gospel reading, the story of Jesus and the Syrophoenician woman who asks for healing for her daughter (Mk 7:25-30; Mt 15:21-18). Initially Jesus turns her down, but then when she persists, he performs the healing.

It is a mysterious story. Why does Jesus refuse? Why does he finally agree to her request? I tweeted that Jesus seemed to learn something from the persistence of a wise woman. In an instant dozens of tweets were lobbed at me, many of them calling me a heretic. Jesus couldn’t learn anything! He knew everything, always! Other tweeters egged people on, and the hate-tweeting dragged on for days.

So I sent out a few tweets reminding people that Jesus was fully human and fully divine, and that we will never fully comprehend how his divinity interacted with his humanity. There are signs in the Gospels that he did not know everything, as when he says that not even the Son knows when the end times would come (Mk 13:32). On the other hand, he shows foreknowledge of his death and resurrection (Jn 2:19). The theological conundrum is this: Since Jesus was divine, he had a divine consciousness and knew everything. But since he’s human he had a human consciousness and needed to be taught something before he knew it. In the end, it’s a mystery.

Still not good enough. “Heretic!” Eventually, I saw that explanations were largely useless. And that those who were denying his humanity were, ironically, themselves thinking like heretics—Docetists, to be precise. A few had only a tenuous grasp on theology. But I wondered if they had a problem not with my theology, but with mystery itself.

I have no problem with theological discussions; but, like most people, I have a problem with hatred, name-calling and invective. Sometimes people online seem so “Catholic” that they’re barely Christian.

So why are some Catholics so mean on social media? For all of Michael O’Loughlin’s reasons. As well, some may be mean to begin with. Catholicism just gives them another forum in which to exercise their emotions. Over time, though, I’ve grown less bothered by the hatred. A few years ago I would have responded to every comment and tried to convince everyone that I was a faithful Catholic. But not now. Why don’t they listen? Why don’t they give people the benefit of the doubt? Why do they label someone a heretic at the drop of a hat?

In the end, I suppose, like so much of human behavior, it’s a mystery.