The complicated life of Jesse Owens 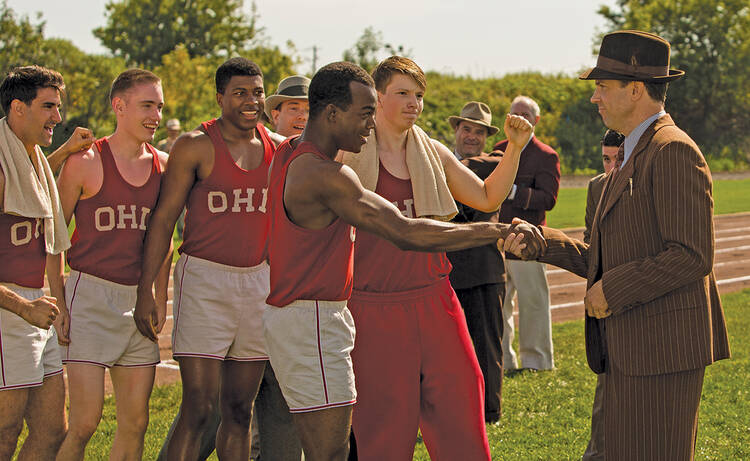 There is no way to ignore the “movie-ness” of Race, the director Stephen Hopkins’s triumphal portrait of the track-and-field wunderkind (so to speak) Jesse Owens, who took four gold medals at the 1936 Berlin Olympics, crushed Hitler’s dreams of a publicity coup and in many ways prepped America for the civil-rights struggle to come. Owens was black, and his success meant that a black man had become an undeniable American hero. (He was even well liked in Germany.) It is a great story.

And as a movie, it might have been made in 1936, save for the black protagonist at its center. “I believed you were meant for great things,” Jesse’s careworn mother (Michelle Lonsdale Smith) tells her son, having sewn him a new jacket to wear as he leaves for Ohio State and the track career that would make his name a household word.

Owens’s experience at school begins with open race­-baiting as well as the more casual but no less vicious institutional bigotry of Depression-era America. His performances amaze all who see them. He wins, he loses, he suffers a stupid injury that he overcomes; and he eventually has to wrestle with the biggest decision of his young life—whether to go to Berlin and compete against the Nazis, or do what the N.A.A.C.P. and others have urged him to do: boycott an Olympic Games being hosted by a murderous, racist regime.

The close-ups tell you where to look; the music tells you how to feel. Which is not to say the indelicately titled “Race” is less than entertaining. It is just obvious and old-fashioned, right up to the relationship at the heart of the movie—no, not the one between Jesse and Ruth (Shanice Banton), his girlfriend and the mother of his child, but the one between Jesse and his coach, Larry Snyder (Jason Sudeikis). Snyder, with whom Owens would form a lifelong friendship, has been on a losing streak until the arrival of Owens, but the young runner’s rescue of Snyder’s career is given far less emphasis than Snyder’s contributions toward making a man of Owens. The young sprinter cannot even look his coach in the eye when they first meet (because custom says he can’t), but he eventually surpasses his mentor in confidence, ability and, of course, celebrity.

There is one particularly wonderful moment executed by the gifted Stephan James (of “Selma”), who plays Owens, after Snyder has put his hand on the young man’s shoulder. His close-up speaks volumes: Who is this white man touching me? Has a white person ever touched me? What does it mean? Has a man ever touched me? Should I be comforted? Worried? And am I revealing my confusion on my face?

“Race” is a movie about personal victory and national guilt—neither Hitler nor Franklin Roosevelt ever shook Owens’s hand; and, as the film shows, Olympic gold had no influence on what doors Owens was allowed to walk through when he got home to solidly racist America. This adds to the movie-ness of “Race”—it is a movie about a black man, directed by a white man, at a time when Hollywood is under well-deserved attack for its perhaps unconscious but nonetheless damaging policies regarding race, gender and who controls the cameras and, more importantly, the budgets.

The Oscars this year will no doubt be a hot mess of apologies, penance and empty promises; it will be interesting to see how the show’s host, Chris Rock, navigates the eggshells of the motion picture academy’s woeful racial history. “Race” is a noble gesture in its way, something that might restore Owens to the prominence he once enjoyed and inspire young African-Americans. Still, its timing is a little awkward.

So is its take on history, at least the history peripheral to Owens’s personal story. The movie is frank enough. Jesse, though betrothed to Ruth, has an affair with the worldly Quincella Nickerson (Chantel Riley) during a trip to Los Angeles; and their picture makes the papers, which wounds Ruth and endangers the relationship. But the point of “Race” is Owens’s virtues, not any vices, and in such a movie, the off-center characters are often the more intriguing.

This is certainly true here, although Hopkins and the screenwriters Joe Shrapnel and Anne Waterhouse take a page from the book of the man who freed Jesse’s grandfather, Abraham Lincoln: Malice toward none; charity for all. It is a policy that can be taken a bit far, and it certainly is here.

The two most fascinating characters in “Race” are not Joseph Goebbels, the Nazi minister of propaganda (a wonderfully loathsome Barnaby Metschurat), whose longed-for P.R. triumph Owens destroys; nor even Adolf Hitler, who has no dialogue, but as embodied by Adrian Zwicker radiates disease and corruption. No, the two unstable explosives in the moral minefield of the 1936 Olympics are Avery Brundage (Jeremy Irons), the longtime International Olympics Committee chair, who was playing financial footsie with the Germans even as he urged the United States not to pull out of the Games; and Leni Riefenstahl, whose filmed account of Berlin ’36—“Olympiad”—is one of the greatest documentaries of all time, albeit one made by an unapologetic enabler of the Third Reich, the Second World War and the Final Solution.

As played by the Dutch actress Carice van Houten, Riefenstahl is pure artiste, devoted to getting her movie made (another example of “Race’s” movie-ness) and willing to defy Goebbels to do it. In reality, she is far more problematic.

As is Brundage, whose long list of “achievements” would include exiling podium protesters Tommie Smith and John Carlos from the ’68 Games in Mexico City. (Brundage never had a problem with the Nazi salute, just the raised black gloves of Smith and Carlos.) He never acknowledged that the teams of South Africa reflected an apartheid regime, never saw a conflict between his purist stance on “amateurism” and the professional athletes of the Soviet bloc, and let the ’72 games in Munich continue even after the massacre of the Israeli athletes. He is a bad actor, and Irons plays him with appropriate oiliness. Still, it feels like the film goes easy on him.

But that is probably O.K. “Race” is Jesse Owens’s story, in the end, and the fact that he rose up amid such ugliness, and ugly people, is a testament to his talent and character. Two of the athlete’s three daughters, Marlene Owens Rankin and Beverly Owens Prather, recently told this writer that their involvement with the Jesse Owens Foundation revealed some interesting phenomena: People the age of, say, Stephan James seem relatively unaware of Owens’s legacy. Younger kids, however, are continually contacting the foundation for help writing school papers and researching their father. One can only hope “Race” accelerates that trend.

Correction (Feb . 15): The name of the character played by Jeremy Irons is Avery Brundage, not Adrian Brundage.

John Anderson is a film critic for The Wall Street Journal, Time magazine and Newsday.

Show Comments (
1
)
Comments are automatically closed two weeks after an article's initial publication. See our comments policy for more.
Charles Rousseau
6 years 6 months ago
I am sure the reviewer meant to refer to Avery, not Adrian, Brundage, having just mentioned that name as one of the actors in the film's cast in the same paragraph. I will not serve as an apologist for Mr Brundage as my recollections of him as IOC president during my high school and college years were not favorable over the events of Mexico City and Munich which bore his heavy hand. However, as I have continued to study Olympic history through middle age I now know that there was something to admire from his youth and early personal competition and his stubborn personal zeal toward amateurism and the ideal of the Olympic spirit. I consider him an object lesson and a warning about the corruption of too much power unchallenged for too long a tenure. I also have a personal recollection of Jesse Owens who served as the honorary referee at the first Invitational Track meet hosted by my alma mater, Jesuit High School of Tampa, FL under the sponsorship of our Dad's Club which was determined to host integrated collegiate and scholastic athletic competition among the segregated university and high school teams in Florida. The University of Florida, Florida State University and the University of Miami joined Florida A&M and Ed Waters College on our track along with more than a dozen of the then-racially segregated high schools of Hillsborough County. I still find it ironic that shortly after he appeared at this event as a gracious ambassador for civic equality and an eloquent spokesman for athletic fair play, sportsmanship and the value of education he was prosecuted by the IRS for tax evasion even though he would eventually be honored by two presidents and Congress for his life's work. It was inspiring to see and hear him and it is gratifying to see his legacy continue with another film to keep that spirit vibrant and alive.