Diamonds in the Rust 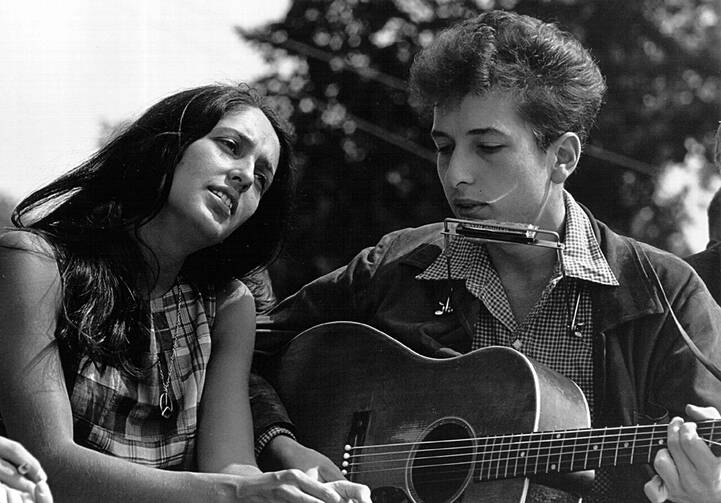 You’re a fan of Bob Dylan, right? But not really. You’re a fan of his music. You prefer covers by Adele, Johnny Cash, The Byrds or Joan Baez, because you don’t much care for Dylan’s voice. And if you’re like most people, you think Bob Dylan is sort of a jerk.

He’s given us plenty of reasons to think so, and I don’t mean in his personal life, which is none of our business. Folks have learned over the decades that to invite Dylan to speak his mind is to court disaster. It started in the early days of his career, when he unleashed a farrago of lies about his age, name and background long before we knew him any better than that.

When I invited one friend (a musician himself) last year to a show, he retorted, “to watch him treat his audience with utter contempt? I’ll pass.”

The worst came in December 1963, two weeks after John F. Kennedy was assassinated, when Dylan turned his acceptance of the Tom Paine Award into a drunken meditation on how “I got to admit that the man who shot President Kennedy, Lee Oswald.... I saw some of myself in him.” Then there was the abuse he hailed on Time correspondent Horace Freeland Judson in 1965, captured in the documentary “Don’t Look Back.” (Judson later called Dylan “a self-indulgent, whining show-off.”) Decades of silence or cryptic public remarks have followed. At the Live Aid concert in Philadelphia in 1985, he mused that some of the money raised for African famine relief should be given to American farmers instead. (The organizer, the musician Bob Geldof, called Dylan’s remarks “crass, stupid and nationalistic.”) Just two years ago, he ran afoul of French antidiscrimination laws against “incitement to hatred” for comparing Croatians to Nazis. Awkward.

And then there’s Dylan’s demeanor at his own concerts. When I invited one friend (a musician himself) last year to a show, he retorted, “to watch him treat his audience with utter contempt? I’ll pass.” And it’s true; there’s no patter with the crowd, no love-fest between star and adoring fans. He walks on stage, he sings his songs the way he wants to (which is almost never the way the fans want them), stares out at the audience, and he’s gone. It’s been going on for decades.

I love him. I have ever since a day in 1996 when, backpacking around Italy, I bought a bootleg CD of “Bob Dilon’s Songs” in a shady mercatino in Naples and listened to it on repeat for days. “Every one of them words rang true,” to quote Bob, “And glowed like burnin’ coal/ Pouring off of every page/ like it was written in my soul.” I’d never heard lyrics like that, never felt so simpatico with a singer. Two decades down the road, I’m still an evangelist and apologist. Dylan is to my mind our nation’s new Walt Whitman, our poet of the body and poet of the soul, someone whose songs have influenced not just musicians but our national conscience on everything from war to love to art and aesthetics. The man whose lyrics have become our lexicon is entitled, if you ask me, to be a jerk in public.

Dylan is to my mind our nation’s new Walt Whitman, our poet of the body and poet of the soul.

All this was on my mind when Dylan received the MusiCares Person of the Year award recently before the 2015 Grammys. Dylanologists everywhere cringed a bit, I suspect, because this was exactly the sort of moment where Dylan often deliberately behaves badly. Remember Michael Jordan’s petty, sneering 2009 acceptance speech for the NBA Hall of Fame? It was sure to be something like that.

Instead, we were given 30 minutes of beautiful staccato prose, expressing Dylan’s gratitude for those who helped him and who honored him. He talked of his heroes (and yes, his enemies: “They say I can’t sing. I croak. Sound like a frog. Why don’t they say similar things about Tom Waits or Leonard Cohen?”), reminisced about his own career, made some terrible puns (“I’m going to get out of here now; I’m going to put an egg in my shoe and beat it”) and gave his views on what makes good music or bad art. And he showed a few moments of startling vulnerability: “Like the spiritual song, I’m still just crossing over Jordan, too.”

If you loved Dylan already, it was an early valentine; if you didn’t, it was still a moment where the batty uncle in the attic showed you what he’s been working on up there since 1962. Think on that for a second—Bob Dylan has been someone on your mind since 1962, more than 50 years ago.

He turns 74 this May. It’s been 53 years since he wrote “Blowin’ in the Wind.” He’s still singing, writing, thinking. Even if he says he “ain’t no prophet, and ain’t no prophet’s son,” it seems he still has much to tell, our Walt Whitman, to an audience that needs to listen.