Finding God in the World Cup 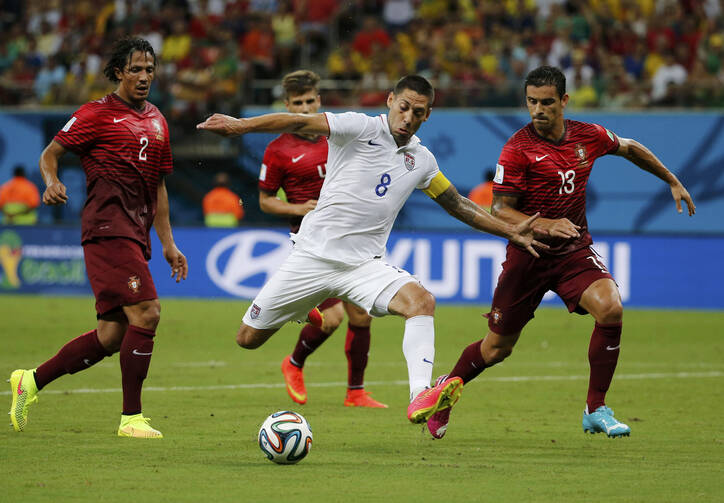 The Anglican Church now has an official set of prayers for the World Cup.

No, it’s not a joke. Bishop Nick Baines of Leeds, a fervent Liverpool fan, posted five prayers on his blog which the Church of England officially published on June 13. Check it out here.

Although this story was immediately picked up in British media, it has been largely overlooked by the U.S. press except for a June 16 blog post by Elizabeth Dias at TIME magazine. “You might be praying and you don’t even know it,” Dias noted in commenting on the bishop’s prayer texts.

St. Ignatius of Loyola, whose motto was “finding God in all things,” could not have said it better.

Ignatius, a Spanish soldier wounded by a French cannonball in a 1521 battle at Pamplona, found God in his suffering and later founded the Society of Jesus.

But Ignatius, looking back later at the vain ambitions of his early life, also saw God working in him precisely at those moments when faith seemed most distant or was not even on his mind. God was with this member of the lower nobility during his years of womanizing and gambling. God was also with him when Ignatius was jailed briefly for beating up a priest who owed his brother some money.

As the World Cup continues to draw international attention, we might stop to ponder how God works for our good in all things, even sports.

After his conversion, Ignatius spent years working with the homeless and disenfranchised, setting up a home for reformed prostitutes in Rome where he had become the first Jesuit superior general.

One story from the Jesuit history books tells how a Catholic bishop, seeing Ignatius begging in the streets one day, burst into tears when he recalled the violent man Ignatius had once been.

As the World Cup continues to draw international attention, we might stop to ponder how God works for our good in all things, even sports.

More than any other sporting event in the world, the World Cup has become a truly “catholic” or universal tournament, uniting peoples across the globe in a spirit of friendly rivalry. The team-oriented nature of soccer makes it difficult for one person, like a Michael Jordan or a Tiger Woods, to dominate the world’s attention for very long.

Even in the United States, where individual achievement and big money contracts have come to dominate professional sports, the World Cup is growing in popularity as the U.S. team grows in success.

When France invaded Spain in 1521, there was no World Cup to help settle their differences, and St. Ignatius held a sword in his hand rather than a vuvuzela horn. But God was still with him.

For the record, here are the five prayers of Bishop Baines:

Prayer 1:  A Prayer for the World Cup
“Lord of all the nations, who played the cosmos into being, guide, guard and protect all who work or play in the World Cup.
May all find in this competition a source of celebration, an experience of common humanity and a growing attitude of generous sportsmanship to others.  Amen.   ”

Prayer 2 : A Prayer for Brazil
God of the nations, who has always called his people to be a blessing for the world, bless all who take part in the World Cup.  Smile on Brazil in her hosting,  on the nations represented in competition and on those who travel to join in the party.  Amen.  ”

Prayer 3 : A prayer for those simply not interested
Lord, as all around are gripped with World Cup fever, bless us with understanding, strengthen us with patience and grant us the gift of sympathy if needed.  Amen.  ”

Prayer 5:
”God, who played the cosmos into being, please help England rediscover their legs, their eyes and their hunger: that they might run more clearly, pass more nearly and enjoy the game more dearly. Amen.”

Spain is out of the World Cup now and England is floundering, but God is still there. I suspect Ignatius is quite content with that.

Sean Salai, S.J., is a Jesuit scholastic and summer 2014 editorial intern. Before entering the Jesuits in 2005, he was a metro desk newspaper reporter for The Washington Times and the Boca Raton News.