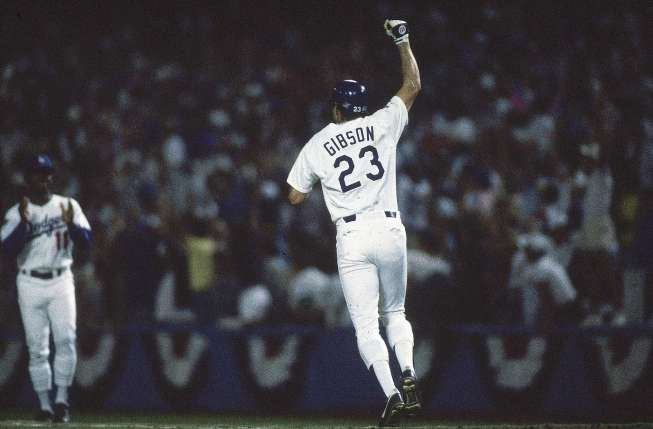 October can be the cruelest month, breeding misery in the hearts of countless baseball fans while rewarding only one team with a World Series title. I remember a day in one of these Octobers 19 years ago as if it were yesterday: Oct. 15, 1988, the day I and millions of others were reminded of the sudden intrusion of the seemingly miraculous into everyday life.

The Oakland As, starring steroid-powered stars Mark McGwire and Jose Canseco, had marched easily into the World Series that year, winning 104 games in the regular season, then crushing the Boston Red Sox in the playoffs. Their World Series opponent was the Los Angeles Dodgers, an improbable bunch of injury-riddled veterans whose season had featured no great consistency but an improbable ability to win the big game.

The team was the pride of Los Angeles in those days (speak to me not of the pretenders to the throne from Orange County, who were and are and always will be from Anaheim). But the Dodgers were more than that. My parents had left New York in the late 1960s to take their chances on the Left Coast, part of a still-ongoing national migration, and in the process left behind almost all of their relatives. Over the years we missed countless baptisms, graduations, weddings and funerals, knowing only secondhand the joys and sorrows our extended families experienced. The Dodgers owned the same story, favorite sons who baffled the denizens of New York by leaving for the rootless West in 1958, finding new life in the dry, earthquake-ridden soil of a distant land. Brooklyn may have never forgiven them, but Los Angeles has always loved them. And they were Catholic for sure, in those days, just like usthe OMalleys and Seidlers at the helm, Vin Scully (a Fordham man) at the microphone, Tommy Lasorda in the dugout. And like so many of their fellow migrants, the Dodgers over the years enjoyed a hard-earned success in their new home, winning championships and setting attendance records year after year.

In 1988, the Dodgers had placed all their hopes on a talented, mercurial free agent outfielder by the name of Kirk Gibson. Behind Gibson and the bookish pitcher Orel Hershiser, who had a season for the ages, the Dodgers took their division and faced the talented New York Mets in the playoffs. Like another Mets team just a few weeks ago, the favorites from New York suffered an improbable series of setbacks, while Gibson and Her-shiser provided one miraculous moment after another over seven games to propel Los Angeles to the World Series.

The first game turned out to be the crucial one. Down early, the Dodgers fought back and were down by just one run going into the bottom of the ninth inning. Gibson had injured both legs in the previous series and had been declared unfit to play. Nevertheless, with the Dodgers down to their last out, he limped slowly to the plate with a runner on, then ran the count to 3 and 2 against the As ace reliever, Dennis Eckersley.

The dulcet tones of Vin Scully have affected my memory of the next pitch, though I did not hear them at the time (I was in Seat 17, Row K), because his call became so iconic in the years following. Gibson, visibly hobbled, mustered all the strength in his upper body and took a mighty swing at Eckersleys signature backdoor slider, lifting it high into the right field seats for a two-run homer and the victory.

After narrating the balls flight, Scully stayed silent for an exultant minute or two, surrounded by the deafening cheers of a joyful city, before adding the perfect coda: In a year that has been so improbable, the impossible has happened!

My 14-year-old brain might as well have exploded, and I didnt return from that high for hours. Or was it months? Perhaps years. The As collapsed in the aftermath, losing in five quick games, and the Dodgers were champions.

The Dodgers have not been back to the big dance since: 19 long seasons. This year they were once again a terrible disappointment, a young team that lost its nerve in the heat of September and missed the playoffs entirely. In their stead, somewhere in the next two weeks the favorite team of other 14-year-olds will be named champions. For me, though, it will forever be a high fly ball to deep right field.... She is...gone!

Show Comments (
1
)
Comments are automatically closed two weeks after an article's initial publication. See our comments policy for more.
Charles Lewis
12 years 4 months ago
Interesting that you say they were Catholic. Back then they were also probably the most Jewish team in the Major Leagues. Larry and Norm Sherry, and of course Sandy Koufax. Koufax, you might remember, went on to win a few games for the Dodgers in LA, and throw four no-hitters, including one perfect game. He also killed the Yankees in the 1963 World Series. Growing up in Catholic/Jewish neighborhood in Brooklyn in the 1950s and early 1960s, I just had to do my bit for inter-religious dialogue.
Advertisement

This article also appeared in print, under the headline “Of Many Things,” in the October 15, 2007, issue.