At Angelus, Pope Francis calls for more protection of refugees during coronavirus pandemic 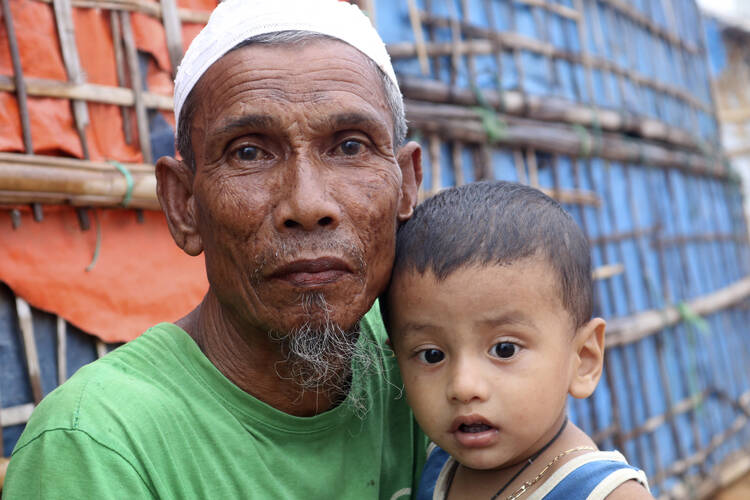 Pope Francis called for “the necessary protection” for refugees worldwide during this time of the coronavirus pandemic when he greeted Romans and pilgrims in St. Peter’s Square on Sunday, June 21.

He began by recalling that yesterday, June 20, the United Nations celebrated World Refugee Day and said, “the coronavirus crisis has highlighted the need to ensure the necessary protection for refugees too, in order to guarantee their dignity and safety.”

He invited believers to “to join me in praying for a renewed and effective commitment, on the part of us all, to the effective protection of every human being, especially those who have been forced to flee as a result of situations of grave danger to them or their families.”

Earlier this week, the UNHCR’s Global Trends Report revealed that an “unprecedented” 79.5 million people were displaced from their homes at the end of 2019. This means that one percent of humanity have been uprooted from their homes as a result of violence, war and persecution. The report lists the top origin countries as Syria, Venezuela, Afghanistan, South Sudan and Myanmar, while the main countries which give them refuge are Turkey, Colombia, Pakistan, Uganda and Germany.

Yesterday, to mark World Refugee Day, the Jesuit Refugee Service (J.R.S.) hosted an online zoom event with the International Union of Superiors General that provided an overview of forced displacement around the world and the dramatic impact of Covid-19 on refugees worldwide.

One of the event speakers, Carolina Gottardo, country director for J.R.S. in Australia, said “Covid-19 has also become a crisis of protection,” and highlighted the plight of refugees and migrants in detention centers and camps across the world, from Malaysia to Mexico, and asked how it is possible to respect social distance in refugee camps such as Cox’s Bazar in Bangladesh?

Another speaker, Taban Patrick Constantino, S.J., gave a moving testimony of his life as a refugee from South Sudan and emphasized the priority of educating refugees, which in his case led to him joining the Society of Jesus, and is now studying at the Gregorian University.

Tom Smolich, S.J., international director of J.R.S., concluded the zoom event by noting that Covid-19 “does not change the reality of the world, rather it has ripped off the band-aid that covered up the dire situation of the 80 million refugees and displaced persons, and the great injustice that exists across the globe today, and it calls us to walk with these people and see in them the face of Jesus.”

At his Angelus address, in addition to highlighting the plight of the world’s refugees, Francis also recalled that “the pandemic has made us reflect is the relationship between man and the environment” and said, “the lockdown has reduced pollution and revealed once more the beauty of so many places free from traffic and noise.” He reminded that “now, with the resumption of activities, we should all be more responsible for looking after the common home.”

This week, on the fifth anniversary of the publication of “Laudato Si’,” the Vatican published a book providing practical proposals as to how people everywhere can take greater responsibility for our common home.

In his comments today, Pope Francis expressed his appreciation for “the many ‘grassroots’ initiatives that are emerging in this regard all over the world.” He cited, for example, today’s initiative dedicated to the Tiber River. He encouraged these countless initiatives worldwide, saying, “May they foster a citizenship that is increasingly aware of this essential common good.”

Knowing that young people are among the driving forces of this movement to protect the environment, Pope Francis greeted them particularly on this day, the feast of the Aloysius Gonzaga, a young Italian Jesuit who died at the age of 23 while caring for the victims of a serious epidemic in Rome. He was beatified in 1605 and canonized in 1726.

Referring to him, Francis said, “I greet young people in particular today, as we remember Saint Aloysius Gonzaga, a young man full of love for God and for his neighbour; he died very young, here in Rome, as a result of caring for plague victims. I entrust young people throughout the world to his intercession.”

As he greeted the hundreds—all respecting the social distance norms—in St. Peter’s Square on this very hot Sunday, Pope Francis noted that among those present in the square today there were pilgrims “increasingly from other countries.” Tourists have begun to return to Rome again from Germany and some other countries, though still in limited numbers. Up to now, the city has been devoid of tourists and traffic to a large extent.

He ended his Sunday greeting in the usual way by wishing everyone “a good Sunday” and saying, “Please do not forget to pray for me. Have a good lunch and arrivederci!”