In a new book, the Vatican presses practical implications of ‘Laudato Si’ 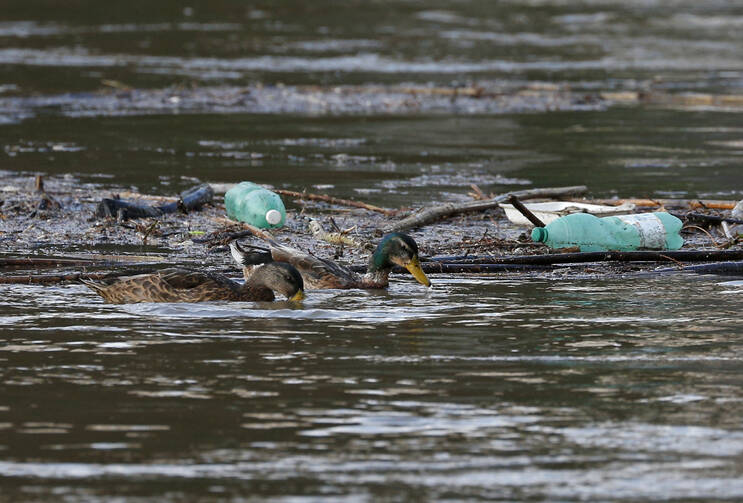 Ducks swim past plastic bottles and other debris floating on the Tiber River in Rome July 28, 2019. In his 2015 encyclical, "Laudato Si', on Care for Our Common Home," Pope Francis said that "the earth, our home, is beginning to look more and more like an immense pile of filth." (CNS photo/Paul Haring)

The Vatican has today published a book—Journeying Towards Care for Our Common Home: Five Years after Laudato Si’—that contains incisive and challenging proposals for the practical implementation of Pope Francis’ encyclical throughout the church and in the wider world.

Archbishop Paul Gallagher, secretary for Relations with States—often referred to as the Vatican’s foreign minister—presented the text along with other panelists at a press conference on June 18 at the Vatican to a limited number of journalists wearing masks and respecting social-distancing and others following on livestream.

He explained that the 227-page text is the result of work done on the theme of “integral ecology”—a central concept of Pope Francis’s encyclical—by an inter-departmental team of the Holy See that started in 2018 with input from various entities of the Holy See and the Catholic Church worldwide.

He said it included contributions from the continental conferences of Catholic bishops, as well as the international unions of men and women superiors generals and networks of non-governmental organizations.

The text seeks “to relaunch the rich contents” of an encyclical still relevant today and even more so in the light of a world hit by the Covid-19 pandemic.

Archbishop Gallagher said the text seeks “to relaunch the rich contents” of an encyclical still relevant today and even more so in the light of a world hit by the Covid-19 pandemic. It also aims to provide a guide to reading “Laudato Si’” and for its practical implementation. Furthermore, it seeks to encourage greater collaboration between the offices of the Roman Curia and Catholic institutions worldwide that are already engaged in the dissemination and implementation of “Laudato Si’.”

Tomás Insua, co-founder and executive director of the Global Catholic Climate Movement and a participant on the Vatican panel presenting the book, described the publication as “a road map for the post-Covid-19 world.” He said it includes “so many great stories from all corners of the globe and all sectors of the church,” including the movement he leads, that illustrate ways in which the encyclical is already being implemented across the world.

Aloysius John, the secretary general of Caritas Internationalis, noted that “a number of the programs” of Caritas’ 162 member organizations are mentioned among “the good practices” in the book. “In this time of crisis, the prophecy of ‘Laudato Si’’ proves true,” he said, “when it pointed to integral ecology as the lens through which we are called to understand and respond to the reality of today’s world.”

The book contains an introduction and two chapters. Chapter I focuses on “Education and Ecology” and emphasizes the need for “integral ecology and spiritual conversion,” which can be developed not only in the family but also through the various levels of education from early childhood to university as well as through catechesis. It indicates the importance of dialogue, collaboration and cooperation in the care of our common home with the other Christian churches and communities as well as with the followers of other religions.

Chapter II is devoted to “integral ecology and integral human development” and reiterates the encyclical’s emphasis that “everything is connected.” It touches many of the hot-button and crucial issues of our day: nutrition; water; energy; eco-systems; deforestation; desertification; use of the soil, the seas and oceans; finance; work; justice and public administration; health and climate change.

Each theme is enriched with a list of relevant texts from Francis and his predecessors on the social teaching of the church. It also contains a section that highlights some “good practices” and a series of concrete proposals for the further implementation of the encyclical in the church and the world. The text emphasizes that “everyone” has a role in the care of our common home, from the individual citizen and the religious community to the state government and the international community.

It calls for “disinvestment from companies that extract or use fossil fuels” and advocates the development of microcredit initiatives and the closing of fiscal sanctuaries.

Speaking of finance, for example, it lists “ethical investment” among the “pillars” for a new paradigm for development and recalls the conferences organized by Catholic Relief Services and the Holy See in this area. It calls for “disinvestment from companies that extract or use fossil fuels” and advocates the development of microcredit initiatives and the closing of fiscal sanctuaries.

In the section on “energy,” it urges moving away decisively from the use of fossil fuels to renewable sources of energy, especially ones that are accessible to the poor.

In this latter context, Archbishop Fernando Vérgez Alzaga, L.C., the secretary general of the Governorate of the Vatican City State, highlighted the many ways the Vatican has become “green,” for example, by saving energy through the use of solar panels and through the renewal of its internal transport system. He said it is implementing the ecological direction called for by “Laudato Si’” in relation to its water systems and protecting biodiversity in the Vatican’s gardens and trees, as explained in the book.

Not surprisingly, the text emphasizes the vital importance and urgency of addressing the problem of climate change and the need to educate people from childhood onwards on how each individual can contribute to caring for our common home. When asked about what he thought of the Trump administration’s move to withdraw from the Paris Accords, Archbishop Gallagher said, “We think the involvement of the United States is essential,” but, at the same time, he “relativized” the role of the federal state “because it is not the only actor.” He explained that “many states” in the United States “have continued their involvement” and that there are “other actors too” in this movement, including the church and in civil society.

Mr. Insua highlighted “the very active participation from the laity in general and young people in particular” in efforts to promote “Laudato Si’.”

Archbishop Angelo Zani, secretary of the Congregation for Catholic Education also underlined the involvement of young people and said the gathering for the Global Compact on education, which had to be cancelled due to the pandemic, will be held virtually on Oct. 15 and will give much attention to youth involvement.

Archbishop Bruno Marie Duffé, secretary of the Dicastery for Promoting Integral Human Development, noted that the book presents a number of “good practices” in the effort to implement the encyclical, in the hope that it will “awaken other educational and community initiatives.”

The speakers on the panel at today’s presentation all conveyed the conviction that the encyclical has given rise to a global dynamic that is destined to grow ever stronger, not only within the church but also in collaboration with other Christians, the followers of other religions and people of good will, and especially young people. They hope the new book, which is an easy read, will serve as a stimulus to further reflection and many more new initiatives across the globe.