The Water That Time: The Biblical ambition of Darren Aronofsky’s 'Noah' 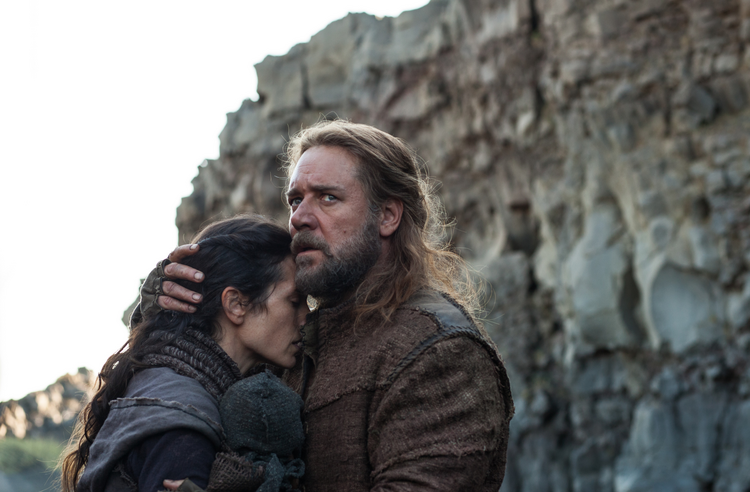 Is it blasphemous to say that the problem with “Noah” is the story? That it may not be substantial enough to float a star-driven, effects-laden, $125-million movie? Or that director Darren Aronofsky’s attempt to hang flesh, blood, human logic and nautical mechanics on a tale that barely takes up 2,500 metaphorical words of biblical text turns out to have been a crazier idea than collecting two of every species on a very big boat and waiting for the Flood?

A Flood, by the way, that only you think is coming?

It comes, of course, but no, God does not actually speak to the fuming ark-builder played by Russell Crowe, who occupies the center of Aronofsky’s film and its cubits and cubits of special effects. Noah looks skyward; he operates on the edge of mental collapse. He is passionate, obsessed, even homicidal. But he’s pretty sure he knows the divine plan. Because Noah’s had a vision.

Likewise Aronofsky. And it’s not entirely dismissible. It ranges far, wide and clumsily in expanding its slender source material, but “Noah” aches with aspiration, its sincerity and ambition virtually leaping off the screen, while Aronofsky’s virtuosity as a visual artist has the viewer praying that the whole enterprise will somehow coalesce into a coherent, convincing story.

Coherent, it may well be: There is a flood; there is a renewal of a world that had been drenched in sin. Convincing, however, is another matter. Several of Aronofsky’s more audacious innovations certainly work against him. The Watchers, for example—the “giants” (Nephilim) of Genesis 6:4 who, in Aronofsky’s world, are angels of light whom an angry Yahweh has turned to stone, given multiple arms and made to move about like arthritic crabs. There are doves on the wing that seem to have escaped from a toilet-paper commercial. Everything that creepeth upon the earth makes its way, in waves of phylum, genus and species, toward Noah’s lumberous boat; the sequences apparently taxed even the FX capacity of George Lucas’ Industrial Light & Magic. But nothing is going to fit, not on Aronofsky’s ark.

It’s an interesting conundrum the director has fashioned for himself. As a 13-year-old schoolboy in Brooklyn, he was entered by his teacher in a UN-sponsored poetry contest and his Noah-inspired composition—“The Dove”—won first prize. Thus inspired, Aronofsky has been nursing a Noah fixation for 30-odd years, during which time he has established himself as a visual artist who gleefully bends the rules of filmmaking, but always remains rooted to emotional reality (even the phantasmagorical “Fountain” was about real love and real death).

What he has arrived at with “Noah” is based on irreconcilable desires: To make the Noah story physically believable, and close to faithful. The two things work against each other. Even as “Noah” is using special effects to promote the idea that thousands of slogging, flying, slithering beasts are making their way onto the Ark, the audience is being provoked constantly into asking, how this can possibly be? The so-called salesmanship is killing the sale.

There’s a discordant artistic logic running throughout the film, as Aronofsky tries to stretch the scant details of Genesis into what he wants to accomplish overall. The building of the Ark requires real toil and real years—Noah was, after all, 500 years old at the time of his job assignment, and 950 by the time he died. The flinty look of the film, especially at its beginning, portrays a scorched plain, a world that has gone barren, and which God has forsaken. It’s unwelcoming, but honest. Then you have the introduction of those craggy Watchers and you don’t know if you’re in an art film or a video game.

And then, of course, there is the engorged narrative. Noah, the tenth antediluvian patriarch who figures not only in the Old and New Testaments but the Koran as well, sees his father (Lamech) killed and begins to have visions—of the palpitating fruit of the Garden, the murder of Abel, of being underwater. These recurring visual sequences are not only an Aronofsky trademark (the “hip-hop montages” that first featured in “Pi”) but also suggest the Abrahamic tradition in which Noah belongs; his lineage—back to Adam and Eve’s third son, Seth—and the curse of Cain, which has led to a world of corruption and violence and convinced the Almighty to destroy and start again.

Which is where Aronofsky starts getting worrisomely creative. Tubalcain, who is mentioned once in Genesis and is portrayed here by the great British character actor Ray Winstone, bemoans the fact that God doesn’t speak to him, as He does Noah, but it may because Tubalcain leads a barbaric horde that is laying waste to the earth and inviting divine wrath. The dramatic conflict that occupies the greater part of the film is about Noah having the flood information, not sharing it, agreeing to waste the whole of humanity save his immediate family (a valid enough point among students of the Bible) and Tubalcain trying to get himself a stateroom on the Ark. OK.

Where the story starts bobbing even more crazily is when we get to Noah family dynamics, which smack of Aronofskian antics: Noah’s wife, for instance, unnamed in the Bible, here is named Naamah—the name of Tubalcain’s sister in Genesis. That Noah’s wife and his nemesis are siblings goes unmentioned, as does the fact that they both would have been considerably older than Noah, even given the lifespans common to Genesis.

As Naamah, Jennifer Connelly is almost too good—she puts such convincing emotional power into some of her scenes that you almost forget that most of what she says is blather. Her sons—all of whom, in the original, boarded the Ark with unnamed wives in tow—are concerned that God has not brought them mates before he brought the rain. Naamah is sympathetic. Noah is not: He believes, and his evidence is all circumstantial, that if God wanted to perpetuate mankind he would have made sure his sons were hooked up. Ham (Logan Lerman) loses his love (Morgan Davenport) and blames Noah (and thus allows Tubalcain to stow away on the Ark). Japhet (Leo McHugh Carroll) is just a boy. Only Shem (Douglas Booth) has a wife, named Ila (Emma Watson) and she is barren, due to some earlier savagery. She will be made whole again through the magic of Methuselah, played by a scenery chewing Anthony Hopkins. But since Noah thinks no one will be reproducing either on board or afterwards, he thinks God intends humanity to end.

The lengths to which Aronofsky has Noah go to assure this—his planned murder of the miraculously pregnant Ila’s twin girls—takes the movie off the rails. Or whatever the watery version is.

The degree to which Aronofsky is up to mischief should not be underestimated. Religious audiences are obviously a target for “Noah” and Paramount Pictures, which has been sweating about the movie since its early survey screenings, has gotten mixed messages back, at best. We wonder if those audiences, chosen to test the waters for a biblical epic that goes its own very eccentric way, picked up on some of the director’s more provocative moves: A visual sequence, for instance, over which Noah relates the Old Testament version of Creation, while at the same time the images are depicting a Big Bang scenario and the evolution of all life crawling out of the sea. Or, for that matter, the very obvious suggestion that, post-Flood, humanity replicates itself via incest. Aronofsky may not have produced a movie that will be thrilling the masses. But a discerning few will definitely be amused. Even appalled.

Show Comments (
1
)
Comments are automatically closed two weeks after an article's initial publication. See our comments policy for more.
Joseph Keffer
7 years 2 months ago
I am one of the appalled. This was a terrible movie apart from any consideration of scripture. Russell Crowe must be embarrassed. The stone creatures (fallen angels) were a joke out of Hollywood's need for massive battling and destruction.