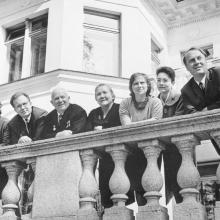 My Father, Nikita: A conversation with Sergei Khrushchev
William van OrnumNovember 06, 2013
Half a century may have mellowed the recollections of many Americans regarding the hottest days of the cold war, but one of the iconic figures of that time remains an intimidating figure in our collective memory: Nikita Khrushchev, remembered as the bellicose premier of the Soviet Union during the d