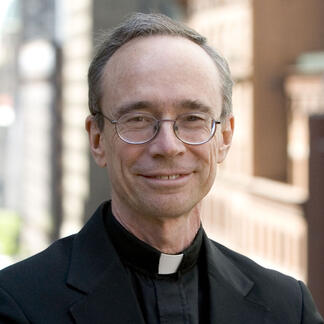 Thomas J. Reese
Thomas J. Reese, S.J., is a senior analyst for Religion News Service. Previously he was a columnist at The National Catholic Reporter (2015-17) and an associate editor (1978-85) and editor in chief (1998-2005) of America.
@ThomasReeseSJ
Articles by Thomas J. Reese

Facts, Myths and Questions
Thomas J. ReeseMarch 22, 2004
For those who have been following the sexual abuse crisis in the American Catholic Church since the mid-1980’s, the reports by the John Jay College of Criminal Justice and the National Review Board for the Protection of Children and Young People provided confirmation of hunches and the destruc

Of Many Things
Of Many Things
Thomas J. ReeseFebruary 23, 2004
Every organization has people who work behind the scenes out of the limelight, to make sure that everything gets done that needs to be done. They do not get the headlines, but no organization can survive without them. America had such a person for 40 years as our business manager and controller. Jam

Of Many Things
Of Many Things
Thomas J. ReeseNovember 25, 2002
Three years ago I had the pleasure of introducing John R. Donahue, S.J., as our Word columnist. He joined the roster of successors to Vincent P. McCorry, S.J., who had written the column for 20 years until 1973: Thomas H. Stahel, S.J., George McCauley, S.J., Joseph A.Tetlow, S.J., John C. Hawley, S.

Of Many Things
Of Many Things
Thomas J. ReeseDecember 24, 2001
Our Christmas gift to subscribers this year is our new Web site. We are very excited about it and believe you will find it informative and useful. Come visit us at: www.americamagazine.org. On our Web pages, you will find practically everything that is currently printed in the paper edition of Ameri

Of Many Things
Of Many Things
Thomas J. ReeseOctober 08, 2001
We want to thank all our readers and friends who expressed their sympathy and concern in numerous letters and e-mails. In the aftermath of the terrorist attack on the World Trade Center, it was good to know that we had friends praying for us all over the world.Our residence-office building is about

Of Many Things
Of Many Things
Thomas J. ReeseJanuary 22, 2001
As I write this column, Pope John Paul II is celebrating the end of the Great Jubilee of the Year 2000 on the feast of the Epiphany. I must admit that I dont get very excited about celebrating events like this, and the constant reference to jubilee wore thin as the year progressed. Part of my hesita

Of Many Things
Of Many Things
Dennis M. LinehanThomas J. ReeseSeptember 09, 2000
Summer is a time of celebration and transition in most religious communities. It is no different for those who live and work at America House, situated midway between Radio City Music Hall and the West-Nile virus hot zone in Central Park. Though none of us has been stricken with any exotic tropical malady, we have suffered from the vagaries of ordinary life. In June, Vincent Duminuco, S.J., director of the International Jesuit Leadership Project, went to Belen College in Miami to give the commencement address. While there, he tripped on a banyan root and broke his shoulder in three places.

A few days later, walking back from visiting Father Duminuco in the nearby hospital, our superior, Vincent T. O’Keefe, S.J., former vicar general of the Jesuits, had an asthma attack. Or so we thought. It turned out to be more serious. He needed surgery on a heart valve plus a double bypass, which was done on June 21. His recovery at the New York Province infirmary progressed well enough for him to enjoy the celebration of his 50th anniversary as a priest on Aug. 24. Our senior editor, John W. Donohue, S.J., had celebrated the same anniversary in June, along with our Father Minister, James Stehr, S.J., who has been a priest for 25 years. Not to be outdone, John Gallen, S.J., our peripatetic liturgist, also celebrated 50 years as a Jesuit in August.

Although Father O’Keefe will be returning to America House as soon as his recovery has progressed sufficiently, his term as superior ends this year. In the meantime, Father Duminuco, who had to cancel his teaching schedule in Italy and Poland while he mends and undergoes physical therapy, was tapped to act as superior. He will hold the reins until January, when we will welcome back to the community as superior Robert A. Mitchell, S.J., whose career has included service as provincial of the New York Province of the Jesuits, president of the U.S. Jesuit Conference and president of the University of Detroit-Mercy. Most recently he was president of Le Moyne College in Syracuse, N.Y., where as a young priest he had been a teacher and dean after his return from studies in Louvain and later in Strasbourg.

Another transition hit us with the sad departure from America of James E. Brogan, who has been a wonderful colleague and an efficient and knowledgeable assistant editor. Jamey came to us after a stint teaching at St. Aloysius in Harlem as a member of the Jesuit Volunteer Corps. As a member of Phi Beta Kappa at Georgetown and a graduate of St. Joseph’s Prep in Philadelphia, he enjoyed a thorough Jesuit education. He is now moving to Weston Jesuit School of Theology in Cambridge, Mass., where he was awarded the J.V.C. scholarship. He will be joining other laypersons who are studying for the master of divinity degree, which he will use in teaching or pastoral ministry after he graduates. We wish him well and will miss him.

In the staff listing to the right of this column, longtime readers will

Of Many Things
Of Many Things
Thomas J. ReeseMay 13, 2000
The death of cardinal John O’Connor of New York on May 3 marks the end of an era in the American Catholic Church. Without question, he was the most powerful American cardinal of his generation. New York makes a bully pulpit for any archbishop with talent and chutzpah, and Cardinal O’Conn 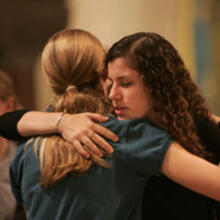 A Kiss is Never Just a Kiss: From April 15, 1995
Thomas J. ReeseApril 15, 1995
The kiss of peace, which originated among the first Christians but eventually fell into disuse, was restored to the Roman missal in 1970.