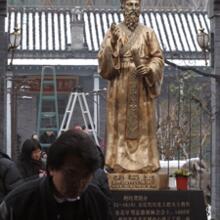 A Jesuit friend gave me his copy of Generation of Giants, by George H. Dunne, S.J., not long ago and told me that this history of the Jesuit mission in China in the 15th and 16th centuries reveals a particularly great hour in the saga of Jesuit history. Indeed it does; that much I really already knew. But in reading the book, I have come to see that the lives of the wonderful "friends in the Lord" who made up the Christian Church in China are more than an artifact to be cherished by Jesuits. They were witnesses to the meaning of our Christian mission to evangelize, now as much as ever.

At one point in the story, after the death of Matteo Ricci, the first great leader of the mission and a man of magnetic grace and genius (an Italian whose face now appears on a Chinese postage stamp), a rising Chinese bureaucrat launched a vicious crusade against the Jesuits in order to further his own political career. He succeeded in obtaining an imperial edict banning the Christians, and the modest inroads the mission had made into an acutely xenophobic land were destroyed. The Jesuits were sent packing, either into hiding with powerful Chinese friends or back to Macao, the Portuguese outpost on the southwest coast of China. They temporarily retrenched, determined to wait out the storm that Shen Ch'iieh had visited upon them, and they busied themselves studying the literature and languages of China.