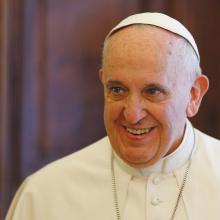 Synod on the Family
‘We Must Reach Out’: Pope Francis speaks about the Curia, the Synod on the Family and the year ahead.
Elisabetta PiquéDecember 23, 2014
Editor’s note: The following interview, conducted in Spanish, is Pope Francis’ first lengthy interview with a newspaper in Latin America. The original text was published in three sections in La Nación on Dec. 7, 2014. An English translation, completed by Vivien Pérez Moran, appeared si