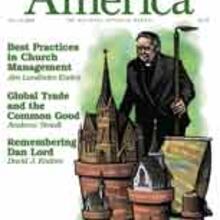 Faith in Focus
Dan Lord, Hollywood Priest
David J. EndresDecember 12, 2005
This year is the 50th anniversary of the death of Daniel A. Lord, S.J. (1888-1955), one of the best-known American Jesuits of the last century. Though now forgotten by many, Lord was a larger-than-life figure in the seemingly confident, cohesive preconciliar church in America. Catholics, especially