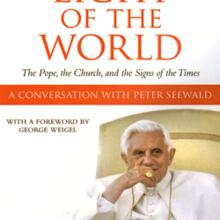 In Light of the World journalist Peter Seewald continues a discussion with Pope Benedict XVI he began over 25 years ago in Salt of the Earth, when Cardinal Joseph Ratzinger was prefect for the Congregation on the Doctrine of the Faith. In Light, the first book length interview conducted with a sitting pope,Pope Benedict XVI comments on a variety of issues relating to the church and the world at large, including the subject of condoms and AIDS. Here we are happy to provide a few excerpts from that conversation. Light of the World is published by the Catholic Truth Society in England and Ignatius Press in the United States. These translations are taken from the British edition.

Pope's Don't Fall from the Sky

Holy Father, on April 16, 2005, your seventy-eighth birthday, you told your co-workers how much you were looking forward to your retirement. Three days later you were the leader of the universal Church with 1.2 billion members. Not exactly a project that one saves for his old age.

Actually I had expected finally to have some peace and quiet. The fact that I suddenly found myself facing this tremendous task was, as everybody knows, a shock for me. The responsibility is in fact enormous.

There was the moment when, as you later said, you felt just as if “a guillotine” were speeding down on you.

Yes, the thought of the guillotine occurred to me: Now it falls down and hits you. I had been so sure that this office was not my calling, but that God would now grant me some peace and quiet after strenuous years. But then I could only say, explain to myself: God’s will is apparently otherwise, and something new and completely different is beginning for me. He will be with me.

In the so-called “room of tears” during a conclave three sets of robes lie waiting for the future Pope. One is long, one short, one middle-sized. What was going through your head in that room, in which so many new Pontiffs are said to have broken down? Does one wonder again here, at the very latest: Why me? What does God want of me?

Actually at that moment one is first of all occupied by very practical, external things. One has to see how to deal with the robes and such. Moreover I knew that very soon I would have to say a few words out on the balcony, and I began to think about what I could say. Besides, even at the moment when it hit me, all I was able to say to the Lord was simply: “What are you doing with me? Now the responsibility is yours. You must lead me! I can’t do it. If you wanted me, then you must also help me!” In this sense, I stood, let us say, in an urgent dialogue relationship with the Lord: if he does the one thing he must also do the other.

Did John Paul II want to have you as his successor?

That I do not know. I think he left it entirely up to the dear Lord.