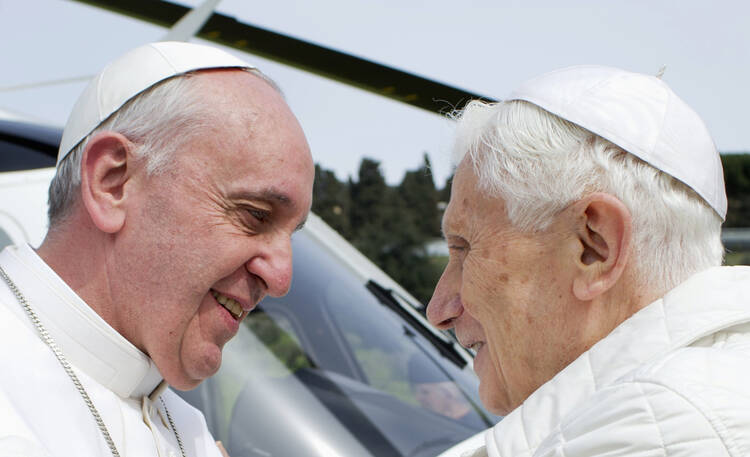 The image is memorable: Two popes enter the chapel of Castel Gandolfo. Pope Benedict looking considerably older, weaker and more frail than when we last saw him flying by helicopter from the Vatican to the pope's official summer residence.

I would like to take you to that chapel now and ask you to picture in your mind’s eye the layout of the furniture there. It was very clear that one distinctive large white chair was meant for our new Holy Father, Pope Francis. Pope Emeritus Benedict XVI was determined that his successor, recently elected, should occupy that seat; Pope Francis was equally determined not to do so. Benedict did his best to almost run after Francis and actually pull him back to take up his rightful seat. A recording of their comments allows us to hear very firm words from the new pope that seemed like: “No, we are brothers. We kneel and pray together.” They knelt on the same kneeler, two papal brothers side by side praying together for the church they love so much. There was not a whiff of rivalry. On the contrary, everything was as it should be. Our Holy Father wanted to send a crystal clear message to the world that he desired parity with his predecessor as far as that was humanly or ecclesiastically possible.

Pope Francis is a master of captivating visual images. One only has to think back to the evening of March 13 when he stepped out on to the balcony, slightly overwhelmed by the huge throng wanting to welcome their newly elected bishop. “Buona sera” was enough to captivate those in the square and every right-minded person throughout the world. We then heard him relate that the cardinals tasked with choosing a new Bishop of Rome had gone virtually to the ends of the earth to find him. And then, in that matter of fact way, he said: “Well, here we are!”

As if all that was not enough, he bowed before the People of God and asked them to pray for him (a favorite theme of his) before imparting his first apostolic blessing. Given the chance, public relations consultants would have been lining up to sign up this savvy pastor who knew very well how to communicate ‘heart unto heart’ in true Newman-esque style.

But let's return to Castel Gandolfo. What image did Pope Francis want to convey? Precisely that he was not going to overwhelm his predecessor; far from it, he wanted to honor him. He wanted to emphasize not only the fraternity of the priesthood but also the fraternity of the papacy. Historians will pore over this moment because there are no roadmaps for such an event; it has been 600 years since anything like this could have occurred.

Like so many others, I must confess that I wondered about the wisdom of a pope emeritus taking up residence within the Vatican grounds. Not for the first time, when I was working as his master of ceremonies, Cardinal Basil Hume would have put me in my place by saying: “You will soon cease to wonder!” How right he would have been as we now see that providence has played a part.

Surely most trips by Pope Francis to see Pope Benedict are just not visible to voracious journalists because it is a very short car journey from the Casa Santa Marta to Benedict’s secluded residence behind the walls of the Vatican. When I was in Rome recently I gleaned that our Holy Father is very spontaneous. I have no way of knowing, but discerning the nature of Papa Francesco, I imagine he would above all want no fuss. Normally, the protocol requires all sorts of people being informed whenever the Holy Father moves even within the confines of the Vatican. I rather suspect this incumbent just wants to have his secretary drive him, incognito, to Pope Benedict’s retreat house. Perhaps one day the cameras will be allowed to see Francis taking the keys of the old car he has been offered, abandoning even his secretaries, and driving there himself.

So what do these images show us? What do these pictures of two popes together tell us? I can only surmise that both popes have the highest respect for each other. Had Pope Benedict not had the humility to step aside we would not have Pope Francis. Who would have foreseen this happening right in the middle of the Year of Faith?

I would venture to say that having two popes is a great grace; indeed grace is truly abounding. I would like to think that their relationship resembles that of Queen Elizabeth II with Queen Elizabeth the Queen Mother when she was alive. Just a daily phone call or a short car journey from Buckingham Palace gave our monarch the chance to seek her mother’s advice and counsel whenever required and thereby avail herself of her experience. All analogies are weak and ultimately fail, but I think one gets the idea. In fact, Pope Francis has expressed himself in this way in relation to his predecessor: "It's like having a grandfather at home, but a wise grandfather. When the grandfather is at home in a family, he is venerated, he is loved, he is listened to. He is a man of prudence!”

Pope Francis has the unique opportunity of being just a phone call away from his predecessor, who assuredly puts his fine, clear and well-stocked theological mind at his succesor’s disposal, as well as the knowledge acquired from seven years on the Chair of Peter, to say nothing of twenty-five years' work in the Curia. It seems to me that we have a win-win situation. A seminary professor of mine often said: “Gentlemen, it’s not a question of ‘either/or’ but ‘both/and.'” This principle is essentially a Catholic one because it is inclusive. Benedict's mission was that of being a pope of reconciliation, drawing together faith and reason, in looking outwards to other Christians and people of faith. How wonderful that the man who coined that fine synthesis, "that faith is not a problem to be solved, but a gift to be discovered," is now available to our current pope for advice and counsel.

The thrust of Francis' mission so far is to show how God's mercy is full of tenderness and offered to all people, how the whole of the human race finds its origin and destiny in the love of God and how we are called back into that love even though it is undeserved. Every day we are being encouraged by Pope Francis to strip ourselves of worldliness in order to create a vacuum which only God can fill.

Benedict promised total loyalty to whoever succeeded him. That loyalty is not in question; indeed it is more than evident. We can be sure that Benedict continues to pray fervently for the church, his successor and the world, while Francis through the Petrine ministry is calling the world to peace and unity.

So it is not and never should be seen as Benedict or Francis, but Benedict and Francis. This is something unique in church history. What a grace, what a blessing!

Canon Daniel Cronin is the former Master of Ceremonies to Cardinals Basil Hume and Cormac Murphy-O’Connor at Westminster Cathedral and Chancellor of the Archdiocese. He is currently pastor of St. Thomas More Church, Knebworth.