A Strange and Urgent Tale: The Gospel of Mark, retold 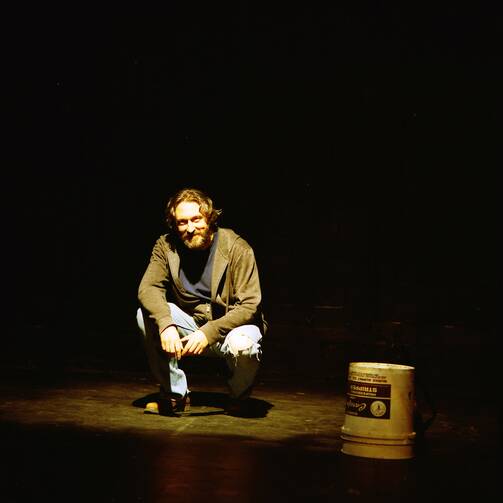 A bearded, haunted man scrambles into the black box theater wearing a soot-colored hoodie, jeans with fist-sized holes at both knees, and a slim backpack, while red siren lights flash and tense cop-show music blares. He crouches behind trash cans to elude an unseen pursuer. When the threat appears to pass, he spots a posted decree from “the Emperor” warning “followers of The Way” that they’ll be detained as “traitors to the state.” Tearing it down, annoyed, he chalks a simple “ichthys” fish in its place on the wall, then turns to us and begins to preach.

“The beginning of the good news of Jesus Christ,” he says with a smile of relief. At last, it seems, he has a captive audience for his underground message. And for the next 100 minutes, we are cast as bystanders, if not quite co-conspirators, for the gritty, occasionally rambling, ultimately transformative tale spun by this streetcorner evangelist.

That sense of urgency and immediacy—as if we’re being buttonholed by a not-entirely-savory urban character with a compelling if often opaque shpiel—is the strongest aspect of *mark, the new one-man play created and performed by George Drance, S.J., and directed by Luann Purcell Jennings, at La MaMa, the legendary off-Off-Broadway outpost. Using a freely adapted, mostly contemporary version of the Gospel of Mark, Drance and Jennings have set themselves the ambitious task of giving us both a feeling of how the oldest of the four Gospels might have sounded before it was written down, and a sense of the context in which it would likely have been shared—i.e., amid widespread Roman persecution and revolutionary turmoil.

They succeed best at the first task, making a fitful but often quite striking case for the theatricality of the text. Drance acts out the spirited dialogue, particularly a series of dramatic moments among Jesus, his frequently clueless disciples, and those skeptical inquisitors, the Pharisees and Sadducees. He walks us through the Gospel’s peripatetic geography with the help of chalk marks on the black floor—I’d forgotten, for instance, that even after Jesus’ triumphant entrance into Jerusalem, he essentially remained a commuter, resting his head in humble Bethany after hard days of casting out moneychangers in the Holy City. And Drance gives the familiar contours of the Passion a fresh, anguished rendition, achieving the estimable feat of generating a modicum of suspense around a story whose ending we know too well.

Of course, both the anguish and the freshness might partly be attributed to the source material. Mark’s Gospel roughly matches the image Drance creates at the beginning of the show: Compared to its more well-heeled brethren, the Gospel of Mark is slightly unwashed, more urgent than eloquent, even a touch paranoid, with its apocalyptic starkness and its recurring emphasis on secrecy and the encroaching pressure of eager mobs. As well as drama, there is rich humor in some of it sharper passages, and Drance finds most of it; I particularly relished the incredulous double take Drance uses to italicize Jesus’ exasperation before the line, “Why does this generation demand a sign?”

The reliance solely on Mark, though, creates some challenges. The Gospel’s jump-cut narrative speeds us quickly through healings and miracles, samples some preaching and parables, then settles in for what is clearly its main focus, Jesus’ Passion and its meaning. While Mark’s brevity is clearly the key to the show’s manageable running time, the Gospel’s rough-hewn structure, lack of interpretative gloss and often prosaic language make it occasionally hard going. At its worst, it evokes Toynbee’s infamous characterization of history as “just one damn thing after another.”

Other times, the effect reminded me of a fascinating, endearing production I saw years ago in Los Angeles of a “first quarto” text of "Hamlet," in which the story’s general outline was honored but some famous scenes and lines were noticeably mangled or missing. Mark, for instance, gives us a few snippets of what we know as the Sermon on the Mount, but not the more beloved passages (Beatitudes? Nice try). And his parables are hardly a greatest hits collection. When Drance quotes Jesus as saying, “But many who are first will be last, and the last first,” it’s impossible not to miss Matthew’s vastly improved formulation (“So the last shall be be first, and the first last”). As admirable as this fealty to a single source is, it is easy to see why most dramatizations sample freely from various Gospels, particularly from the more polished renditions of Matthew and Luke.

The show also makes a few tonal missteps: Elizabeth Swados’ music provides excellent underscoring but less convincing sung passages, and there are moments when Drance seems to lose the thread of character and is just a guy reading from the lectionary. These small failures are actually instructive, suggesting that any single attempt to encapsulate or clarify the inexhaustible, thorny mystery of the Gospel—especially but not only this one—may be a fool’s errand.

It is a holy fool’s errand, though. When “*mark” clicks, as it often does, it does what any preacher or popularizer hopes to achieve: It makes us hear these well-worn tales anew; it takes them off the inanimate page and gives them body and voice. Indeed, the show’s best moment may be its conclusion, a potent bit of theatrical indeterminacy by which Drance handles Mark’s infamously abrupt, bleak original ending (“They said nothing to anyone, because they were afraid”). Jesus may be most present among us, “*mark” suggests, when we are present with each other.