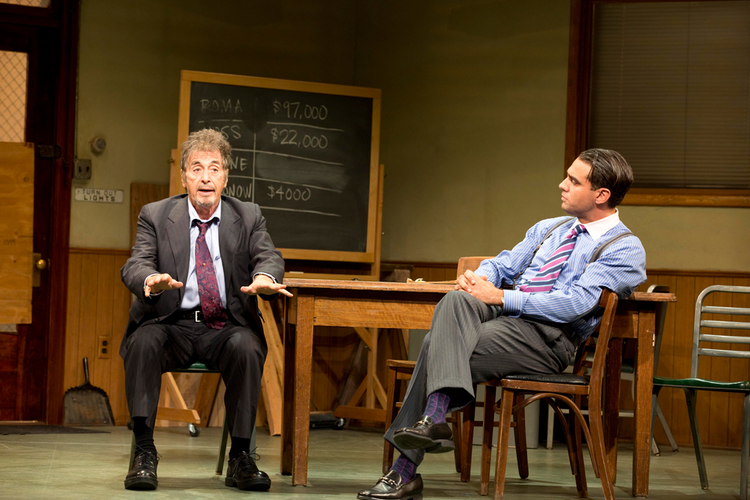 There’s a classic bit of advice for actors: Walk into the audition thinking of yourself as the solution to the director’s problem; be that solution and you’ve got the part. Closing the deal is a steeper challenge for the cutthroat salesmen in David Mamet’s 1983 masterpiece Glengarry Glen Ross, now getting a gripping if lopsided Broadway revival starring Al Pacino. The customers these salesmen go after—mostly offstage, with one telling exception—must be convinced they have a problem in the first place, one that only a costly real estate investment can solve. The salesmen’s job, then, is to hunt for signs of vulnerability, of weakness, in their fellow men, to isolate and circle the victims, then pounce without mercy. The dramatic irony of their situation, though, is that this rapacity doesn’t harden them; instead, their extreme sensitivity to human frailty, even though it’s used for exploitive ends, seems to have shredded their nerves and wrecked their composure. These are by and large an oddly fearful and touchy bunch, as if their worst nightmare is to become marks themselves.

Hence the itchy, sweaty, swear-y back-and-forth that constitutes the trademark Mametspeak, which is closer to music than language:

MOSS: Look at Jerry Graff. He’s clean, he’s doing business for himself, he’s got his, that list of his with the nurses...see? You see? That's thinking. Why take ten percent? A ten percent comm...why are we giving the rest away? What are we giving ninety per...for nothing. For some jerk sit in the office tell you "Get out there and close." "Go win the Cadillac." Graff. He goes out and buys. He pays top dollar for the...you see?

It’s the sound of bruised animals licking their wounds and worrying over their spoils. None show more battle scars than Shelly Levene, an aging pitchman making the unpleasant discovery, as Willy Loman did before him, that seniority and dignity do not accrue to salesmen; they are only as good as their last deal. But dying animals can be the most dangerous, and Levene’s desperate attempts to stay in the game—to get his numbers “on the board” in a ruthless new sales contest at his office—drive the play’s plot and give it a measure of petty tragedy. Levene is not a grand figure, and true to form, he is often played by sad-sack everymen late in their careers: Robert Prosky, Jack Lemmon, Alan Alda. In the new production’s clearest departure from precedent, Pacino plays Levene as a still-kicking contender, a fighter marked as much by grit as by fatigue. If one of the questions the play inevitably raises is just how good a salesman Levene really was in his heyday—few in his office seem to recall the past sales triumphs he continually brandishes—then Pacino puts any doubts to rest. Though now in twilight, Levene’s brilliance at the pitch is clear as day here.

That’s not least because the glow is reflected back to him by the office’s true sales star, the alpha-male slickster Ricky Roma (Bobby Cannavale), whom we first meet importuning a mild-mannered stranger in a Chinese restaurant with a shpiel that’s alternately shocking and smooth, crass and philosophical. (He closes that sale, of course.) Roma is typically the play’s showpiece role, and Cannavale has his work cut out for him sharing the spotlight with Pacino’s outsized Levene. But the pairing works for a few reasons: The husky-voiced Cannavale, outfitted here in a stiff pomade and a colorful tie, like a refugee from Guys and Dolls, has a magnetic presence that’s in full effect even when he’s listening rather than speaking. Still more satisfyingly, the sense of a torch being passed from a seasoned old pro to a young Turk in his prime has added resonance and texture here; even if Pacino himself hadn’t played Roma in the sleek 1992 film of Glengarry, we would still be able to see the clear lineage of one still-vital veteran actor sharing the stage with a gleaming younger model.

Under Daniel Sullivan’s measured direction, the rest of the actors don’t exactly fade next to this formidable twosome, but they have a tougher time registering in what is usually aptly described as an ensemble piece. As the ulcerous, resentful Moss, John C. McGinley hits the Mamet rhythms so hard it hurts; even if some of that exertion is rooted in the character, the effort shows. And as the shambling Aaronow, Richard Schiff has a great aria of indignant rage that doesn’t quite get the exit applause it deserves, I suspect because it seems to come from, and end up, nowhere. The play’s most thankless job, though, is the role of Williamson, the mealy-mouthed office manager, an unloving and unlovable cipher who takes the brunt of the show’s abuse, including a long, profane dressing-down by Roma that includes the withering parry, “Whoever told you you could work with men?” The stiff-backed, exasperated David Harbour doesn’t quite wither in the role, but he doesn’t exactly flourish, either.

Little of this detracts from the play’s punch, or from the sheer theatrical delight of the exchange that constitutes the show’s central scene. As Levene lovingly recaps a sale he has just made to a gullible older couple, while a rapt Roma eats up every detail, we are watching more than a master class in sales, or in acting. We are also touching the tender American heart of uncomfortable truths about aspiration and impermanence—about finding our meaning in our work and reifying that meaning in private property—that underpin our fraught, messy relationship to real estate, which in turn is what drove the world’s economy off a cliff four years ago. It is at the crossroads of our material anxieties, which fill more of our days and sleepless nights than we’d care to admit, that we are bound to meet the salesman, and he—no less anxious and uncertain than us, but armed with a purpose and a script—makes his mark. The Levenes of the world may get tossed out like so many sytrofoam packing peanuts when they have outlived their actuarial usefulness. But to a distressing extent, this is a salesman’s world, and we just pay to live in it.