A Revolution Recalled: When The Beatles came to town 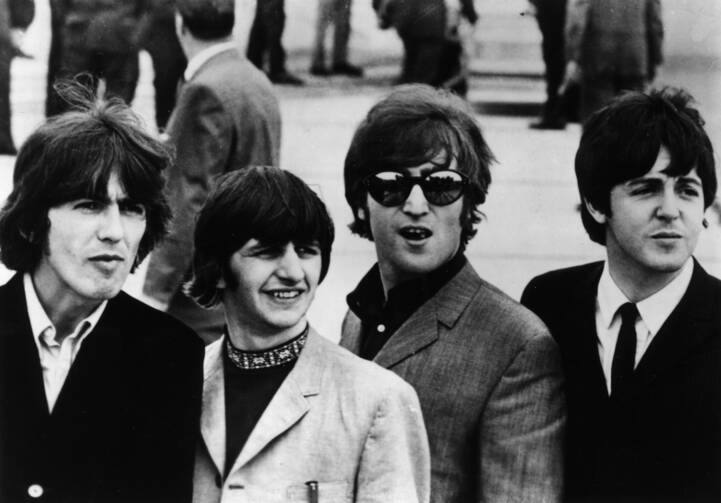 We have all seen the black and white footage from that February day in 1964.  Teenagers by the thousands were screaming from balconies and behind police barricades. Four Liverpudlians—ranging in age from 20 to 23—emerged from a Boeing 707 appearing as though they had stumbled into an enormous outdoor surprise party. Then there was the press conference at JFK airport where they mugged for the cameras like latter-day Marx Brothers.

But with the benefit of a half-century of hindsight, we now know that what stepped off of Pan Am flight 101 from London was much more than a pop group in the eye of a media hurricane. Though it was dubbed the beginning of the British Invasion, that description is far too parochial. The Beatles’ arrival in America marked the beginning of a revolution that would be felt around the world. It was as if mythical explorers had finally landed in the new world to share their discovery of fire with us.

This was a revolutionary moment in a decade that spawned quite a few. It was a time in which a new generation would question long-held assumptions and beliefs and reassess the value of established institutions. The Beatles were not simply messengers announcing the arrival of this new generation; they were the embodiment of the message itself. They were smart, young, talented and unencumbered by history, tradition and responsibility. And the catalog of music they created between June 1962 and January 1970 was unparalleled.

The band’s impact was so swift and total that in 1966, just two years after they had landed in America, John Lennon’s claim that The Beatles were “more popular than Jesus” didn’t seem all that far-fetched. Coincidentally, though perhaps not entirely unrelated, the Catholic Church itself was undergoing a revolutionary moment of its own in the form of the Second Vatican Council (the embodiment of this particular moment, however, has been a far more contentious process).

Some might argue that Beatlemania was simply a demographic inevitability. It was, after all, the moment when a huge generational cohort—the baby boomers—first came of age and made their presence felt as a social, cultural, political and economic force. But to reduce that moment to a formula—mass media + mass youth market + mass leisure time = x—is to misunderstand The Beatles’ significance entirely. When 73 million Americans (essentially half the population) tuned into “The Ed Sullivan Show” on February 9, 1964 a generational Big Bang occurred.

“It was absolutely earthshaking,” Tom Petty recalled in an interview some years ago. “Culturally, it changed everything in America, and probably the world. The influence on every part of our lives was huge, from social issues to fashion issues to music issues. From that point on, The Beatles were the North Star for me and my generation.”

If they were the North Star, The Beatles were moving at light speed through the firmament in terms of their output and creativity. To go from writing the effervescent teen pop of “I Want to Hold Your Hand” to the genre-defying epic “A Day in the Life” is quite a journey; to do it in four years is extraordinary. The loveable mop tops in their matching suits who entered the American consciousness in 1964 exited the world stage in 1970 having explored styles ranging from British music hall and psychedelia to Indian meditation and avant-garde tape looping. In that same span, the critical establishment went from dismissing them out of hand as a teen sensation to taking pop culture seriously by inventing new ways to understand The Beatles’ synthesis of high and low culture in their music.

If there were such a thing as a Platonic ideal for the notion of “band,” the Beatles would be it. They define the form. Everything that came after them has either been building upon or reacting to them. Without The Beatles there is no Sex Pistols, no U2, no Nirvana, no Radiohead, no Arcade Fire. The list is endless.

And yet, while it would be difficult to make sense of the past 50 years culturally without The Beatles, it’s equally difficult to imagine anything like it happening again. Not because there won’t be enormously talented artists in their wake, but because our attention economy is now overcrowded with endless content choices and technologies that make it nearly impossible to garner the critical mass of viewers The Beatles attracted.

The role that music plays as a shaper of the culture at large is no longer as central either. The days in which large numbers of people lined up to buy concert tickets or a new album have been replaced with crowds sleeping out overnight in the hopes of being the first to purchase a new piece of technology. The Apple iPhone and iPad have become The Beatles of this age.

So the medium has finally overtaken the message. Technology has supplanted rock stars in the 21st century and the competition for attention in a fragmented media landscape makes it nearly impossible to make a mark on the public consciousness the way John, Paul, George and Ringo did 50 years ago. But what about Francis?

In an era of lightning fast change and mind-numbing options, how does a 77-year-old Argentinean cardinal—essentially unknown less than a year ago—take the world by storm and become the Person of the Year in publications ranging from Time to a national LGBTQ magazine? How does Rolling Stone, which debuted in 1967 with a picture of John Lennon on its front page, end up with the Vicar of Christ gracing its cover in 2014? What alternate universe are we living in? Is this a sign of the apocalypse?

Is it possible that while the world has been clumsily negotiating the effects of the upheavals from the 1960s that the church has been negotiating its own engagement with the world? Is Pope Francis—the first pontiff to be ordained a priest after Vatican II (1969)—the embodiment of what a church that has begun to integrate the teachings of the council looks like?

There is a crucial last sentence that is always left out of the reports of John Lennon’s claim that The Beatles were more popular than Jesus, “Jesus was all right” he said “but his disciples were thick and ordinary. It's them twisting it that ruins it for me.” Perhaps in Francis the church has stumbled upon a revolutionary moment—a profound untwisted simplicity—all its own.

Bill McGarvey is a musician and writer. He's the author of The Freshman Survival Guide, owner of CathNewsUSA.com and was the longtime editor in chief of BustedHalo.com.

@billmcgarveybillmcgarvey@gmail.com
Show Comments (
3
)
Comments are automatically closed two weeks after an article's initial publication. See our comments policy for more.
Beth Cioffoletti
8 years 7 months ago
Yes, what about Francis. I predict that his effect on culture will be just as profound (if not more so) than that of the Beatles. What an amazing thing to be seeing "live" in our lifetimes.
Gere Johansing
8 years 7 months ago
The Beatles were in my life a lot during the years I departed from the Church for 7 years starting in 1963 attending what was known as the no. 1 party school in the US. I went to that university only because it ran a top geology department. But the world changed for me in 1967 when I first visited Haight-Ashbury. By the time the Beatles began visiting India and embracing Hindu spirituality, I also recognized the need for a more intimate spiritual union with God. I will forever thank God for my experiences and amazing help from the Native American Church. One experience caused me to return to my Church the next day! While two of the Beatles were baptized Catholics, Paul and George, none remained even Christian until later in life. John who was born in a Catholic family that became Anglican in his youth returned to living a staunch Christian life before he was killed. I pray Paul will see what I saw that made me come back in a slam. Who knows, he might get a chance to hang out with Pope Francis. I hope and pray for that or another experience like mine.
Bill McGarvey
8 years 7 months ago

Thanks for your comment, Gere. It sounds like you've had a unique journey of faith. Beyond George, I wasn't aware of all of their religious backgrounds. I'm wondering where you've seen evidence that John was living a "staunch Christian life" before he was killed? That was certainly news to me.