Responding to "The Joy of the Gospel" 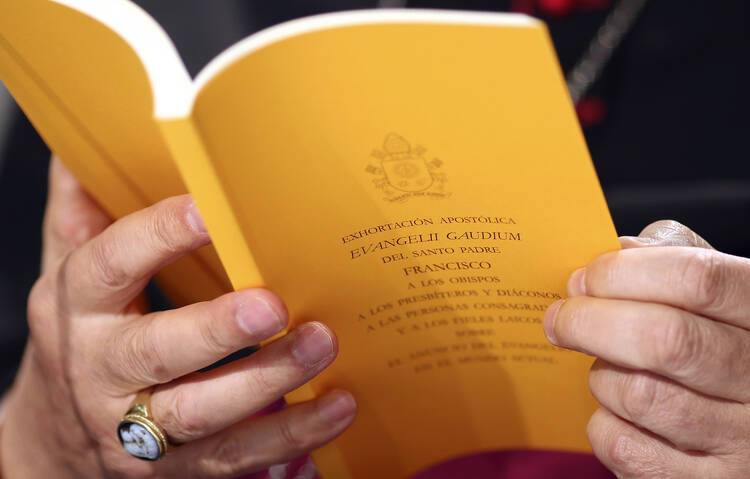 On Nov. 26, 2013, Pope Francis issued "Evangelii Gaudium" or “The Joy of the Gospel,” his first extensive piece of writing as pope. Below is a round up of news coverage and reflections on the apostolic exhortation.

"A theology unmoored from the kerygma is no longer faith wholeheartedly seeking understanding, no longer hope giving an account of its sure basis in the risen Christ, no longer love speaking passionately of its Beloved."

"The paragraph puts the non-Christians in their place, whereas what is needed is rather a more enthusiastic sense that “we” – Christians and non-Christians alike –have a shared task in the world of this new century, all of of us energized by faith."

"The Church Encounters the World," In All Things, Drew Christiansen, S.J., November 27

"Francis revives one of the most important tools for engagement with the world that had been suppressed for the last 30 years: the reading of the Signs of the Times as a task of the whole people of God. "

"The Dignity of the Vulnerable," In All Things, Meghan J. Clark, November 27

“'I prefer a Church which is bruised, hurting, and dirty because it has been out in the streets, rather than a Church which is unhealthy from being confined and clinging to its own security' (49). Thus "Evangelium Gaudium" places the work of the Catholic Campaign for Human Development and Catholic Relief Services at the center of the church’s evangelization."

"On Our Pilgrim Way," In All Things, Amanda C. Osheim, November 27

"Through dialogue and each other we discern our personal and communal response to God. Francis indicates that all the baptized are “missionary disciples” and “agents of evangelization” (No. 120). Our graced response is our collective responsibility."

"Francis on the 'Joy of the Gospel'": Pope lays out his vision for an evangelical church, Catholic News Service. November 26

"Pope Francis' voice is unmistakable in the 50,000-word document's relatively relaxed style—he writes that an "evangelizer must never look like someone who has just come back from a funeral!"—and its emphasis on some of his signature themes, including the dangers of economic globalization and "spiritual worldliness.""

"A New Vision for the Church," In All Things, James Martin, S.J., November 26

"It seems that with each new homily, address, interview, general audience message and letter, Pope Francis is challenging himself—and us—with three questions, each of which flows naturally from the other: First, Why not look at things from a new perspective? Second, Why not be open to doing things in a new way?  And third, Why not have a new vision for the church?"

"One of the things most striking to me about "Evangelii Gaudium is what Pope Francis says about the contemporary phrase “the new evangelization.” Rather than emphasizing that evangelization, as such, needs to be made new, he redirects our attention to ourselves as individuals and a church to see that weare the ones who need to be made new or, as the pope’s namesake said eight-hundred-years before, it is we who need to begin again to serve the Lord God."

"Whereas earlier texts on the new evangelization focused primarily on the problems posed by secularism, sexual immorality and the “dechristianization of Europe,” Francis hits hard on economic inequalities throughout the world. For him, it seems that it is economic inequality—not secularization—that is the major issue that the church is called to address."