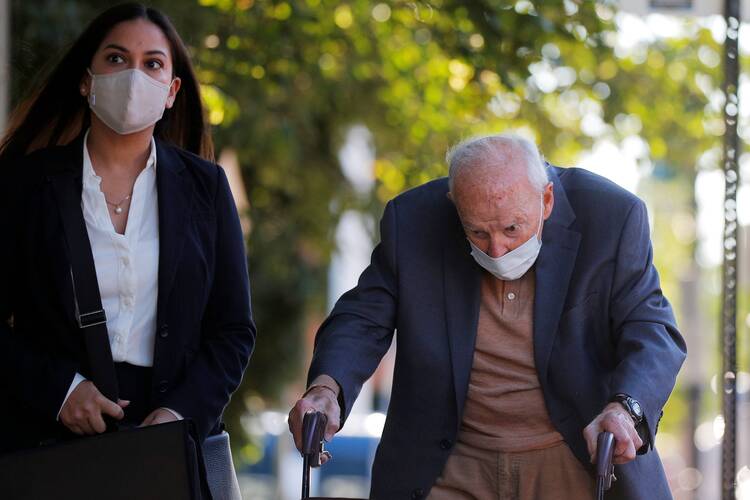 McCarrick’s lawyers filed a motion in Massachusetts’ Dedham District Court Jan. 13, citing a December examination conducted by David Schretlen, a professor of psychiatry and behavioral sciences at Johns Hopkins University School of Medicine. According to the motion, Schretlen found the 92-year-old McCarrick has neurological defects and impaired memory and cognition.

“Based on preliminary discussions with Dr. (David) Schretlen, counsel have developed serious concerns that Mr. McCarrick may no longer be legally competent to stand trial, because he would be unable to assist meaningfully in the preparation of his own defense or to consult effectively with counsel during trial with a reasonable degree of rational understanding,” the motion stated.

McCarrick’s lawyers had filed the motion to continue, seeking more time to prepare an eventual motion to dismiss.

McCarrick faces three counts of indecent assault and battery on a person over the age of 14 in the Massachusetts court.

Barry Coburn, one of McCarrick’s lawyers, declined to comment when reached by OSV News Jan. 18.

David Traub, spokesman for Norfolk County District Attorney Michael Morrissey, said the defense has not formally filed a motion about McCarrick’s competency, but rather raised the question in a filing seeking a delay in the proceedings.

McCarrick faces three counts of indecent assault and battery on a person over the age of 14 in the Massachusetts court. Although the alleged abuse took place more than 50 years ago, McCarrick halted the expiration of the statute of limitations by leaving the state after the abuse took place, allowing for the criminal charges to finally be brought years later, according to attorney Mitchell Garabedian.

Garabedian is representing the alleged victim in the case, who is pursuing civil trials against McCarrick in New York and New Jersey courts. If McCarrick is ultimately found incompetent to stand trial, that will not stop the civil cases, Garabedian said.

Garabedian, who has represented numerous victims of clergy sexual abuse, told OSV News he is not surprised by the defense’s motion.

“It does not come as a surprise to me that Cardinal McCarrick would be trying to avoid a criminal trial taking place for reasons related to his mental or physical health.”

“For decades, I’ve seen priests as criminal defendants claim to have all of a sudden become infirm, mentally incompetent, or otherwise not able to testify,” Garabedian said. “It does not come as a surprise to me that Cardinal McCarrick would be trying to avoid a criminal trial taking place for reasons related to his mental or physical health.”

The complete defense report on McCarrick’s competency is expected to be filed in the next 30 days. If prosecutors do not agree with the defense report, the legal process allows for the court to appoint an evaluator to examine McCarick and issue another report, Traub said. If there is a discrepancy between the two reports, the case would then be scheduled for a hearing in court.

Traub said if McCarrick is deemed incompetent, the case would not necessarily be automatically dismissed. The court could set a schedule to periodically check on McCarrick’s condition to see if he can be returned to competency through treatment. Traub acknowledged that such treatment is not likely in cases of age-related mental decline.

Garabedian said he took a deposition from McCarrick in 2020 for the civil lawsuits that lasted for more than six hours, though he declined to discuss McCarrick’s demeanor during that deposition.

If convicted, McCarrick faces up to five years in prison on each count.

McCarrick was charged in 2021 after an investigation started when Garabedian sent a letter detailing the allegations to the authorities. According to court records, McCarrick was close to the victim’s family, celebrating Mass at their home and even going on trips with them. The victim told investigators that McCarrick abused him during trips out of state. It also was under the guise of providing spiritual direction to the victim that the abuse took place, according to the criminal complaint.

If convicted, McCarrick faces up to five years in prison on each count.

McCarrick was once considered the most powerful cleric in the U.S., serving as the Catholic archbishop of Washington from 2001 to his retirement in 2006. He was well-known for his prolific fundraising.

Over the years, a number of men came forward accusing McCarrick of sexual abuse, among them seminarians. Two New Jersey dioceses conducted secret settlements with alleged adult victims of McCarrick in 2005 and 2007. However, the Archdiocese of New York in 2018 revealed they had received a credible allegation of sexual abuse of a minor against the then-cardinal. McCarrick was removed from public ministry in 2018, and eventually laicized by Pope Francis. He has been living at a facility in Missouri.

Garabedian said even if the Massachusetts criminal case is dismissed because of the competency question, the victim showed courage to come forward against the former cardinal.

“My client should be proud no matter the outcome in the criminal case for coming forward, standing and confronting evil, and proceeding with claims against Cardinal McCarrick,” Garabedian said. “It is an honor to represent him.”

Damien Fisher - OSV News
Show Comments ()
Join the conversation: Login or create an account
Before you can comment, you need to update your profile to include your first and last name, as required in our comments policy. Then reload this page and you'll be set up for commenting. Update your profile