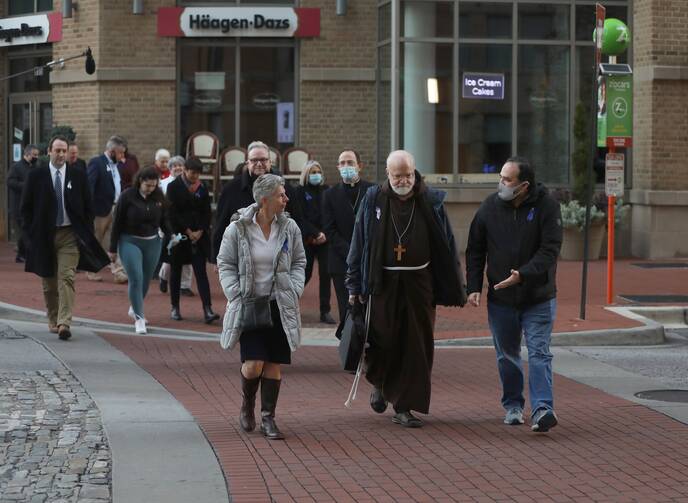 Cardinal Seán P. O'Malley of Boston, president of the Pontifical Commission for the Protection of Minors, leads a sunrise walk to end abuse in a Nov. 18, 2021, file photo. The Archdiocese of Baltimore has released a new report on priests who have sexually or physically abused victims. (CNS photo/Bob Roller)

ANNAPOLIS, Md. (AP)—An investigation by Maryland’s attorney general identified 158 Roman Catholic priests in the Archdiocese of Baltimore who have been accused of sexually and physically abusing more than 600 victims over the past 80 years, according to court records filed Thursday.

Attorney General Brian Frosh announced that his office has completed a 463-page report on the investigation, which began in 2019. He filed a motion in Baltimore Circuit Court to make the report public. Court permission is required because the report contains information from grand jury subpoenas. It’s unclear when the court will make a decision.

“For decades, survivors reported sexual abuse perpetrated by Catholic priests and for decades the Church covered up the abuse rather than holding the abusers accountable and protecting its congregations,” Frosh wrote in the court filing. “The Archdiocese of Baltimore was no exception.”

Both boys and girls were abused, according to the court filing, with ages ranging from preschool through young adulthood.

“The Report summarizes the sexual abuse and physical torture perpetrated by all 158 priests and the Archdiocese’s response to that abuse,” the court filing said.

The archdiocese did not immediately return a request for comment.

While the court filing noted that more than 600 victims were identified, it also said “there are almost certainly hundreds more, as the Department of Justice’s Annual Crime Victimization Report has demonstrated that most incidents of sexual assault go unreported.”

Both boys and girls were abused, according to the court filing, with ages ranging from preschool through young adulthood.

“While the Archdiocese reported a large number of allegations to police, especially in later years, for decades it worked to ensure that the perpetrators would not face justice.”

The sexual abuse was so pervasive, the court filing said, that victims were sometimes reporting sexual abuse to priests who were perpetrators themselves.

The investigation also revealed that the archdiocese failed to report many allegations of sexual abuse, conduct adequate investigations of alleged abuse, remove abusers from the ministry or restrict their access to children.

“Instead, it went to great lengths to keep the abuse secret,” the court filing said. “While the Archdiocese reported a large number of allegations to police, especially in later years, for decades it worked to ensure that the perpetrators would not face justice.”

“Publicly airing the transgressions of the Church is critical to holding people and institutions accountable and improving the way sexual abuse allegations are handled going forward.”

In the court filing, Frosh argues that “publicly airing the transgressions of the Church is critical to holding people and institutions accountable and improving the way sexual abuse allegations are handled going forward.”

“More importantly, it is vital to protecting children and the entire community,” the filing said.

The court filing also noted that of the 43 priests that have not been publicly identified or prosecuted, 30 have died.

“For those priests that have died, this additional secrecy interest is less compelling,” the filing said.

The attorney general’s office redacted all identifying information for for the 13 living church officials who have been accused of sexual abuse but who have not been listed as credibly accused by the archdiocese and who have not been prosecuted.

In 2019, Frosh launched a criminal investigation of child sexual abuse perpetrated by priests and other employees of the Archdiocese of Baltimore. Hundreds of thousands of documents dating back to the 1940s were produced in response to grand jury subpoenas.

As part of its investigation, the attorney general’s office created an email address and telephone hotline for people to report information. Over 300 hundred people contacted the office, and investigators interviewed hundreds of victims and witnesses.

Brian Witte - Associated Press
Provide feedback on this article
Join the conversation: Login or create an account
Before you can comment, you need to update your profile to include your first and last name, as required in our comments policy. Then reload this page and you'll be set up for commenting. Update your profile