Will Trump defy another rule of politics? Comebacks (usually) require asking for forgiveness. 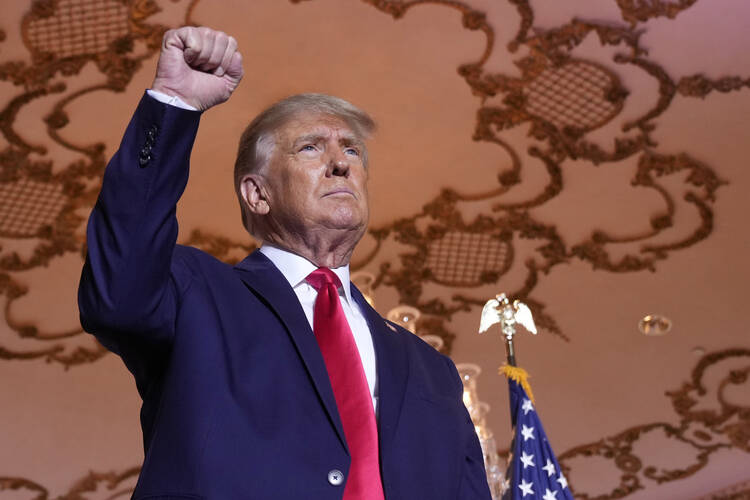 George Wallace, the Democratic governor of Alabama, was the most notorious demagogue in the United States during the 1960s, becoming a serious presidential candidate after vowing, “Segregation now! Segregation tomorrow! Segregation forever!” But in 1982, he achieved one of the most striking comebacks in U.S. politics, returning as governor after saying to Black Americans, “I can only ask your forgiveness,” and putting together a multiracial coalition to win the Democratic primary and general election.

Let us all pause to imagine Donald J. Trump saying, “I can only ask your forgiveness” to anyone.

Let us all pause to imagine Donald J. Trump saying, “I can only ask your forgiveness” to anyone.

“There are no second acts in American lives” is one of those adages that are only trotted out to prove how wrong it is. The novelist F. Scott Fitzgerald actually introduced the idea only to immediately refute it, writing in a 1932 essay, “I once thought that there were no second acts in American lives, but there was certainly to be a second act to New York's boom days.” (By now, New York must have had six or seven acts and is working on a post-Covid comeback.) American politicians have not been quite as nimble as entertainers like Madonna in reviving their careers again and again, but some have seemed impossible to get rid of, and Mr. Trump is clearly aspiring to outdo them all.

Mr. Trump announced on Tuesday that he is seeking to become the first president since Grover Cleveland to return to that office (in 1892) after leaving it, the first person since Richard Nixon (in 1968) to secure a major-party nomination again after losing a presidential election and the first politician since Hillary Clinton (in 2016) to convince a major political party to take a chance on them despite flashing red lights the size of Mount Rushmore. He did not follow George Wallace’s example of contriteness.

He could get the Republican nomination anyway. Polls still have him in the lead, and Gov. Ron DeSantis of Florida, seen as his chief rival, is untested on the national stage. (If Florida is such a good test kitchen for presidential candidates, why didn’t Marco Rubio and Jeb Bush do better in 2016?) Mr. Trump’s success at hurting the Republican brand may lead to fewer people voting in Republican presidential primaries in 2024, giving Trump diehards more influence in the nomination process.

“I’ve changed,” or at least “I’ve changed my mind on some things,” is almost a requirement for a second chance in politics.

But political comebacks have traditionally required an expression of humility, as well as the promise to have learned from past mistakes, and Mr. Trump is not associated with either of these things. No one expects him to campaign as “the New Trump,” the way Richard Nixon successfully presented himself as the “New Nixon” in 1968, eight years after losing the presidency to John F. Kennedy. The New Nixon was ostensibly less angry, less sweaty and less preoccupied with geopolitics (that is, actually interested in the lives of ordinary Americans). He didn’t convince everyone that he had changed, but merely admitting that he had room for improvement was enough to give him another chance at the presidency.

Similarly, Michael Dukakis and Bill Clinton were both tossed out of the governor’s office in their respective states after one term, and their claims of being better political leaders after being humbled by the voters (a “humblebrag”?) helped them to return as governor and, eventually, to become Democratic Party nominees for president.

“I’ve changed,” or at least “I’ve changed my mind on some things,” is almost a requirement for a second chance in politics. So when running for president in 2020, Joe Biden tacitly admitted that the “tough on crime” policies of the 1990s, which he had championed at the time, had gone too far. He also expressed “regret” for his dismissive treatment of Anita Hill, as chairman of the Senate Judiciary Committee, when she accused Clarence Thomas of sexual harassment before his confirmation as Supreme Court justice in 1991.

No one expects Mr. Trump to follow the lead of Bill Clinton and say that there must have been a good reason why voters rejected him last time.

Yes, these declarations of self-improvement can seem phony or opportunistic to many or most voters. Ms. Hill did not become a Biden champion in 2020, and plenty of Black Americans never forgave George Wallace, pointing out that if he knew his race-baiting was wrong in 1982, he should have known it was wrong in 1962. Candidates saying they have “evolved” on certain issues understandably raise suspicions, as when they change their public positions on abortion to match the political party they’ve chosen to join.

But saying “I’ve changed” or “I’ve learned” after an electoral defeat is one of the rituals of democracy. It is an acknowledgment that voters are supposed to guide political leaders (not just the reverse), a recognition that an election result is…well, legitimate and not “rigged.”

“I never respected critics,” Mr. Trump said in announcing his 2024 campaign. “They tell people what’s wrong, but they can’t do it themselves.”

But isn’t that the definition of a voter in a democracy—someone who tells political leaders “what’s wrong” and asks those leaders to do the things that individual citizens can’t do themselves?

No one expects Mr. Trump to follow the lead of Bill Clinton and say that there must have been a good reason why voters rejected him last time, or to emulate George Wallace and apologize for things like his role in the Jan. 6 insurrection. I won’t be surprised if his 2024 campaign falls apart after an interview or a debate in which he refuses to say there is anything he could have done better as president. He would still have plenty of fans, of course, but he can always guest on Andrew Cuomo’s new “I did nothing wrong” podcast.