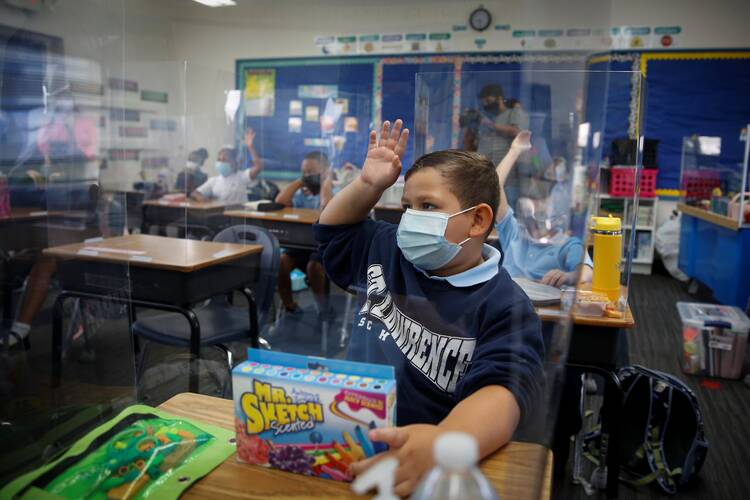 Bad news about the impact of the Covid-19 pandemic on learning was even worse than expected, though the numbers were probably not a complete shock to parents who have spent months juggling Zoom schedules and wondering if their kids were learning anything. Children in the United States have suffered unprecedented losses in math and reading scores, according to the National Assessment of Educational Progress, a congressionally mandated report card on academic progress.

Years of progress in math were reversed during the pandemic as math scores saw their largest decrease ever, and reading scores dropped to 1992 levels. Nearly four in 10 eighth graders failed to grasp basic math concepts. Not a single state saw a notable improvement in average test scores, with some simply treading water.

But the nation’s Catholic schools either held the line on their previous N.A.E.P. scores or lost substantially less ground than both public and charter schools. On eighth-grade reading scores, Catholic schools even managed to score a one-point improvement while charter and public schools each lost three points.

The nation’s Catholic schools either held the line on their previous N.A.E.P. scores or lost substantially less ground than both public and charter schools.

According to the N.A.E.P., Catholic school eighth graders scored five points lower in math in 2022 than in 2019, a serious decline but better than the eight-point loss among public school students and the nine-point drop at charter schools. According to the National Catholic Educational Association, Catholic school students’ average scores remained 15 points higher than the average scores of their eighth-grade public school peers in the assessment.

“I was heartened by the results,” said Kathleen Porter-Magee, an adjunct fellow at the Manhattan Institute and the superintendent of Partnership Schools, a network of urban Catholic schools in Harlem, the South Bronx and Cleveland.

In an assessment on Twitter, she pointed out: “If Catholic schools were a state, they’d be the highest performing in the nation on all four N.A.E.P. tests.”

In an interview with America, Ms. Porter-Magee said that the performance outcomes “really shines a bright light on just how important the American Catholic school system is to the landscape of American education, and it shows that America needs a truly diverse network of educational options for kids; there is no one-size-fits-all solution.”

In an assessment on Twitter, Kathleen Porter-Magee pointed out: “If Catholic schools were a state, they’d be the highest performing in the nation on all four N.A.E.P. tests.”

According to a statement released on Oct. 25 by the N.C.E.A., the report card’s data also shows that Catholic schools are near the top in learning outcomes for students receiving free and reduced-price lunch, “demonstrating the system’s commitment to underprivileged students.”

Lincoln Snyder, the president of the N.C.E.A., called the results a proud moment for Catholic education. “One of the reasons Catholic schools performed so well is that our teachers showed up for the kids,” he said. “In every state, we were among the first to transition to distance learning, and after that brief time, also among the first to return students to a safe in-person environment. That’s why I call our educators heroes.”

In the first nationally representative study of the pandemic’s impact on learning, the N.A.E.P. tested hundreds of thousands of fourth and eighth graders across the country this year—the first time the test has been administered since 2019. Confirming what many had feared, racial inequities appear to have widened. In the fourth grade, Black and Latino students saw bigger decreases than white students, widening gaps that have persisted for decades.

Inequities were also reflected in a growing gap between higher and lower performing students. In math and reading, scores fell most sharply among the lowest performing students, creating a widening chasm between struggling students and the rest of their peers. Los Angeles schools bucked the national trend with eighth-grade reading scores increasing by nine points, the only significant uptick in any district, and a number of other big-city systems like New York and Houston were able to hold the line against achievement losses.

Confirming what many had feared, racial inequities appear to have widened.

Those better results were not enough to offset what translated into lost ground in every state in the nation. No part of the country was exempt. Every region saw test scores slide, and every state saw declines in at least one subject.

“It is a serious wakeup call for us all,” Peggy Carr, commissioner of the National Center for Education Statistics, a branch of the Education Department, told The Associated Press after the report card was released on Oct. 24. “In N.A.E.P., when we experience a one- or two-point decline, we’re talking about it as a significant impact on a student’s achievement. In math, we experienced an eight-point decline—historic for this assessment.”

Researchers usually think of a 10-point gain or drop as equivalent to roughly a year of learning.

“Eighth grade is a pivotal moment in students’ mathematics education, as they develop key mathematics skills for further learning and potential careers in mathematics and science,” said Daniel J. McGrath, an associate commissioner for assessment at the U.S. Department of Education’s National Center for Education Statistics, in a statement released with the report. “If left unaddressed, this could alter the trajectories and life opportunities of a whole cohort of young people, potentially reducing their abilities to pursue rewarding and productive careers in mathematics, science, and technology.”

As the crisis unfolded through the winter and the summer of 2020, Catholic schools, like all other schools, closed according to state and local mandates aimed at suppressing the spread of Covid-19, but many were quick to reopen to modified in-class learning as soon as they were allowed to. Did that make the difference?

As the crisis unfolded through the winter and the summer of 2020, Catholic schools, like all other schools, closed according to state and local mandates.

“I think it was huge,” Ms. Porter-Magee said. Emerging post-shutdown studies, she said, support the proposition that the more time students have been able to experience in-person instruction, the better they have performed both academically and in terms of social-emotional learning.

She emphasized the importance of following the science in making decisions about school closings and re-openings as the nation struggles with the lingering pandemic or confronts other health crises that might emerge in the future. She pointed out that Catholic school officials never followed an “open at all costs” approach during the pandemic.

By the beginning of the 2020-21 school year, according to Ms. Porter-Magee, 92 percent of Catholic schools nationwide were open to “some kind of in-person learning, compared to only 43 percent of public schools and 34 percent of charter schools.”

“That decision to reopen accounts for the biggest part of the story of the difference in Catholic school achievement,” she said.

Now that this failing national grade has been released, Ms. Porter-Magee said it is critical for educators and policymakers to begin making investments to mitigate the damage.

“We need to be working right now to empower all parents with school choice, so that they can find—pretty urgently—the school that’s going to best meet whatever their particular children’s needs are, and we’re going to have to make sure that we’re stepping up additional supports or tutoring and also intensifying our support in school [to counter] student learning loss.”

Restoring the lost year experienced by so many now fifth and ninth graders will be a national challenge. Ms. Porter-Magee suggests it could be an opportunity for Catholic schools to stand out for families that are looking for alternatives to public schools.