Kidnapped Catholics are the latest victims in Cameroon’s ‘Anglophone crisis’ 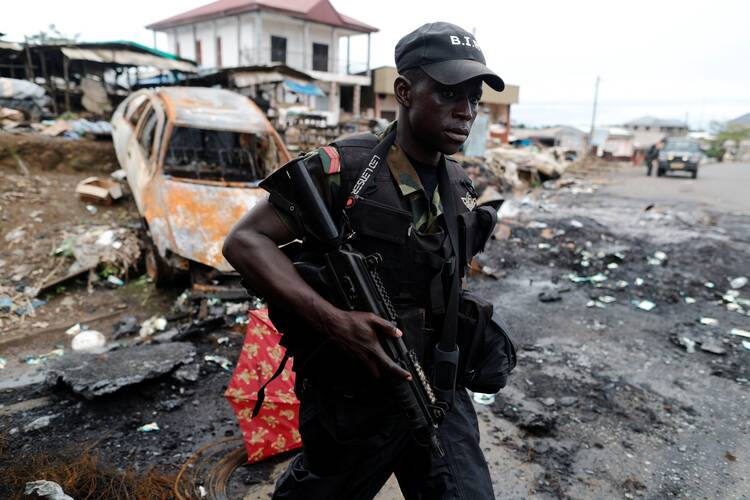 The Central African country of Cameroon is often called “Africa in miniature” because of its geographic and cultural diversity. Cameroon maintains one of the highest literacy rates on the continent and once ranked among Africa’s most prosperous nations. Yet today, Cameroon’s progress is threatened by a deadly continuing conflict, rooted in its colonial past when different regions of what would become modern Cameroon were administered by both the British and the French.

A protest which began in Cameroon’s northwest and southwest regions, also known as Ambazonia, has escalated into a civil war as militants in these regions seek independence for the minority Anglophone population. The rising tensions and outbreaks of violence that have persisted over the last few years have been dubbed the “Anglophone crisis.”

According to recent estimates, at least 6,000 civilians have been killed since the conflict between government and separatist forces began in 2016, and more than 765,000 people have been internally displaced from the Anglophone regions. But what began as an independence struggle with significant popular support has in recent months disintegrated into something closer to banditry.

At least 6,000 civilians have been killed since the conflict between government and separatist forces began in 2016, and more than 765,000 people have been internally displaced.

On Sept. 16, an attack occurred at St. Mary’s Parish in Nchang, a community in the Diocese of Mamfe. The church and parish buildings were razed by fire and five priests, a sister and three lay people were kidnapped. The separatists are demanding a $50,000 ransom for the release of their victims.

The Rev. Cornelius Jingwa, one of the victims, issued an appeal in a video released on social media by the kidnappers on Oct. 19, according to the Vatican news service Fides. “So far it has not been easy,” he said in the short video. “If you take a good look at us, you will see our sad and tired faces.”

Father Jingwa said that “the situation we find ourselves is quite difficult and we are begging our Lord to do everything possible to get us out of here.” He reported that the condition of the hostages is not good. “I have fallen seriously ill, even my brothers are not at all well,” he said.

A Jesuit working in Cameroon—who did not wish to be named for security reasons—said that the kidnapping shows just how deeply the Anglophone crisis has permeated Cameroonian life. He said that in the past the separatists would only fight government forces and attack those they believe to be collaborating with the government.

Now all vulnerable people appear to be just as likely to be victimized. “We are really worried about the situation of the church and the people there,” he said.

According to the Jesuit, people in the area of St. Mary’s claim that the attackers came from Nigeria. He said that he wishes that the episcopal conference in the country would be more united and talk with one voice to the government about the crisis.

A protest which began in Cameroon’s northwest and southwest regions, also known as Ambazonia, has escalated into a civil war as militants in these regions seek independence for the minority Anglophone population.

In a statement, the bishops of the Bamenda Province of Cameroon condemned the attack and appealed to the raiders to release their hostages. They said that a wave of persecution against the hierarchy is a new aspect of the violence and that threatening messages are sent to missionaries who work for the people.

The Catholic Church has increasingly become the target of attackers, the bishops said, noting that Presbyterian and Baptist churches have also been targeted.

The contemporary conflict and disorder can be traced back to Cameroon’s earliest days as an independent state. The northwest and southwest of Cameroon, known as “British Cameroons,” were under British colonial administration between 1919 and 1961. A popular vote in 1961 supported union with French Cameroon.

Since the reunification, however, Cameroonians of the two English-speaking regions, which comprise 20 percent of the nation’s population, have complained of discrimination and exclusion. English-speaking people have come to resent the claim that Cameroon is a bilingual state. They charge that Francophone Cameroonians dominate public life in the country.

In Douala and Yaoundé, two cities with large Anglophone communities, French is the only language that can be used to access public services. Anglophone Cameroonians say that the Francophone majority treats the Anglophone regions as colonial appendages and that its residents do not have an equitable share in political power in the country.

The drive for Anglophone independence began after teachers and lawyers launched peaceful protests in October 2016 to highlight the neglect and marginalization of the English-speaking regions. Demonstrators focused on the appointment of Francophone teachers, prosecutors and judges in Anglophone areas.

Cameroon President Paul Biya and his government have spurned discussions with separatists or federalists, believing this would imply a loss of power for the central government.

Protesters denounced these appointments as evidence of a slow-but-steady campaign of “Francophonization” of all of Cameroon. Unfortunately, the initially peaceful resistance movement was suppressed by force by Cameron’s longtime President Paul Biya. Unarmed protestors were shot and killed by Cameron soldiers, and many others who were detained endured abuse at the hands of security forces.

Mr. Biya and his government have spurned discussions with separatists or federalists, believing this would imply a loss of power for the central government. Instead, Mr. Biya has publicly called separatists “terrorists” and murderers,” who do not represent the views of the Anglophone areas.

The government’s reaction to the 2016 protests has made many fear speaking out. However, it has also radicalized some Anglophone youth and rallied support from Anglophones outside the country.

About two-thirds of Cameroon is Christian, and 25 to 30 percent is Muslim. The Catholic Church tried to resolve the crisis in 2016. The bishops of the Bamenda Province, which includes the Anglophone areas, wrote a memorandum to the government laying out the genesis of the conflict and offering solutions for its resolution.

Mr. Biya seems to have largely ignored what the bishops said. That could be because the national church is not seen as a strong mediating force in the conflict—even though it could potentially be—because it is not itself united. Cameroon bishops themselves still retain vestiges of colonial loyalties. Francophone bishops are largely silent about the crisis even as Anglophone bishops try to address it.

Other Catholic clergy have adopted clashing views on the crisis. The conflict is complicated. Various separatist groups claim to be fighting to restore the Republic of Ambazonia. Each group says they are a legitimate pro-independence movement, and the leadership of the different groups have lost control of their fighters.

Cameroon bishops themselves still retain vestiges of colonial loyalties. Francophone bishops are largely silent about the crisis even as Anglophone bishops try to address it.

Many Anglophone Cameroonians initially supported the pro-independence movement; now, the independence fighters have turned against the average people, engaging in kidnapping for ransom and, at times, killing villagers. Leaders of the militia groups whose members are responsible for such crimes have condemned them, but their members continue to carry them out.

The Anglophone resistance itself has also splintered over a disagreement between federalists and radical separatists. Federalists want to return to the initial 1961 plan of a two-state federation. Separatists want outright independence for the Anglophone regions.

In an interview with the Association for Catholic Information in Africa, the director of the Denis Hurley Peace Institute, Johan Viljoen, said: “We fear that the situation in the northwest and southwest parts of Cameroon may be deteriorating into anarchy.”

The institute, named after Archbishop Denis Hurley, a leader in the anti-apartheid movement in South Africa, is sponsored by the Southern African Catholic Bishops’ Conference. The institute focuses on conflict monitoring and peacemaking all over Africa.

It is not clear why Anglophone separatists attacked St. Mary’s, Mr. Viljoen said, since the movement “has no religious bearing.” Mr. Viljoen said that the people of Ambazonia have suffered immeasurably at the hands of the independence militias and are now expressing a preference for the current Francophone government over the pro-independence movement.

The people of Ambazonia have suffered immeasurably at the hands of the independence militias and are now expressing a preference for the current Francophone government over the pro-independence movement.

According to Mr. Viljoen, to win back the hearts and minds of the people they claim to represent, the pro-independence movements must join together and abstain from attacking and kidnapping local people. Otherwise, he believes Cameroon will end up trapped in a cycle of violence like Somalia, the Eastern Democratic Republic of Congo or South Sudan.

He explained: “At first, the leaders of South Sudan enjoyed the support of locals fighting for the independence of South Sudan. But the infighting between leaders caused the current crisis in the country. I fear Cameroon may end up this way.”

The head of communications for the Cameroon Bishops’ Conference, the Rev. Humphrey Tatah Mbuy, charged that the war has brought about economic benefits for both the government and separatists. In an interview with local media, he said that there are reports that government soldiers arrest people and only release them upon payment of bribes. The separatists do the same.

Father Mbuy said that this “war economy” makes negotiations for peace difficult. He noted that the government and separatists target the clergy because of their peacemaking efforts and ransom value. The priest said that both sides accuse the church of supporting their opponents. He reiterated that the church is impartial in the conflict, saying that, “like a mother, when your children are fighting, you try to bring them together to end the conflict.”

Father Mbuy laments that the church is being attacked, saying it is like shooting yourself in the foot because the church has the “unique moral force to help resolve the armed conflict.”

The road to peace in Cameroon seems like it will be a long one. Parties seem unwilling to negotiate, Father Mbuy said. “You can’t force somebody to sit down and talk. You can only discuss with someone who is ready for a discussion.”

@rpollittsj
Show Comments ()
Join the conversation: Login or create an account
Before you can comment, you need to update your profile to include your first and last name, as required in our comments policy. Then reload this page and you'll be set up for commenting. Update your profile