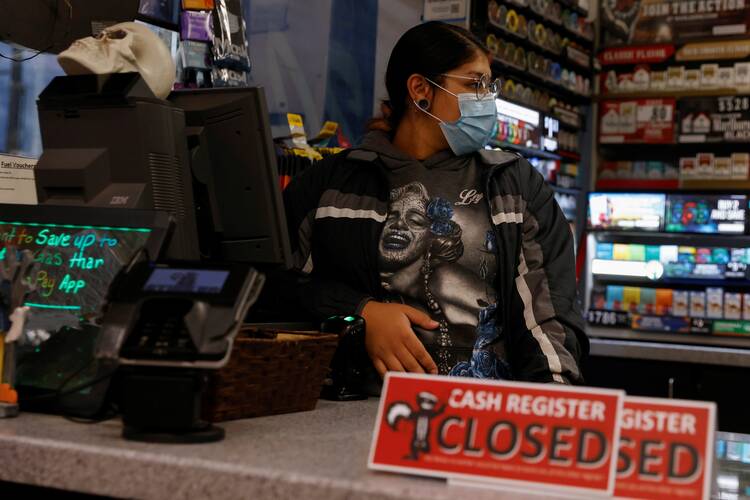 Armanda Legros told a story before Congress in 2014 that would be sadly familiar to many today. A working, pregnant woman, at six and half months, she had pulled a muscle in her abdomen. She asked her doctor for a note to bring to work, explaining that she needed to avoid heavy lifting.

But “my manager took one look at the note and sent me home without pay, indefinitely,” she said. “He said I could only work if I had no restrictions—company policy. I knew this wasn’t true: They had accommodated my co-worker who had injured his back on-the-job.”

Ms. Legros was the sole breadwinner for herself and her two young children. Dismissed from her full-time job, she found a part-time job and signed up for food stamps and Medicaid.

The job security she had before she was forced out of work because of her pregnancy would not be restored until months later, after her child was born.

If she or one of her children had gotten sick before then, she said, “I worry what happens…We simply can’t afford it.

“Having a child shouldn’t mean losing your job,” Ms. Legros said in her testimony. “It should not lead to fear and financial dire straits. But the experience of having my son—without a paycheck—was one of the hardest for my family.”

Ms. Legros had been testifying in Congress in support of the original iteration of the Pregnant Workers Fairness Act, a proposed law that would have prevented Ms. Legros from being forced out of her job in the first place. Now 10 years after the bill was first introduced, the act is seriously being considered before Congress again.

The act proposes to protect pregnant workers nationally from being denied workplace accommodations, such as an extra water bottle, a place to sit or a lighter load to move or carry.

These days it is no small achievement for a bill to receive bipartisan support, especially on a subject as fraught as women’s health care. The P.W.F.A. has proved an exception. Democrats and Republicans have found common ground in a bill that is, according to its supporters, pro-worker, pro-life and pro-family. It recently passed in the House of Representatives with votes from both sides of the aisle and is currently before the Senate, though no vote has been scheduled.

The act is modeled after a previous legislative success, the Americans With Disabilities Act. But that ground-breaking law did not explicitly extend job protection to workers who faced short-term disabilities related to their pregnancies, though 30 states and five cities have passed their own laws that require employers to provide accommodations for pregnant workers. The act proposes to protect pregnant workers nationally from being forced out on leave or from being denied workplace accommodations, such as an extra water bottle, a place to sit or a lighter load to move or carry for a few months.

The need for the P.W.F.A. remains clear. A recent report in The New York Times detailed how numerous women working at an XPO Logistics warehouse in Tennessee suffered miscarriages after they were forced to continue to move heavy loads and perform other demanding physical tasks while pregnant. The women had all provided doctors’ orders to avoid heavy lifting that were ignored by their employers.

The bill was inspired by the efforts of A Better Balance, a national advocacy group promoting equal opportunity in the workplace, especially for low-income, working mothers. Proponents have been pressing for the bill since 2012. Network Lobby for Catholic Social Justice has partnered with A Better Balance to advocate for the bill’s passing. Gina Kelley, a government relations specialist with Network Lobby, said that the bipartisan support for the act reveals how Catholic social teaching on the rights of workers can be universal.

She argued that it is essential for the act to become law. “This is not a hypothetical situation or something that would be nice to pass eventually,” she said. “Right now, in communities across the country, pregnant workers and their families face impossible decisions and devastating consequences because there is not a federal law that protects them.”

“This bill provides employers with clear guidance and outlines a process for faithful negotiations to provide workers reasonable and temporary accommodations.”

The president of the Catholic Labor Network, Adrienne Alexander, said that the bill “has won the support of a broad range of organizations, from labor unions to women’s groups to the Catholic Church”—the bill has been endorsed by the U.S. Conference of Catholic Bishops.

Even the U.S. Chamber of Commerce voiced its support because the proposed law would let businesses “keep valued employees in the workplace, help ensure healthy pregnancies and remove legal ambiguities that have led to litigation.”

“This bill provides employers with clear guidance and outlines a process for faithful negotiations to provide workers reasonable and temporary accommodations,” Ms. Kelley said. “It’s a mutually beneficial solution to a pervasive problem.”

The P.W.F.A. would protect all pregnant workers, but its effects would be felt even more strongly by workers in physically demanding jobs, many of whom are women of color. Ms. Kelley said that the P.W.F.A. addresses both gender-based and racial workplace inequities. “While pregnancy discrimination affects many workers,” she said, “Black and brown workers carry a heavier burden as they disproportionately occupy jobs with low wages and few preexisting benefits and protections.”

These workers often find themselves in warehouse jobs, working as cleaners or nursing assistants or in other physically or emotionally demanding jobs that increase their risk of pregnancy complications. “Black and Native American women are already two to three times more likely to die from pregnancy complications compared to white women,” Ms. Kelley said.

“No woman should be forced to risk her or her child’s health, miscarriage, preterm birth, economic security or losing insurance benefits just because she requests a short-term, reasonable, pregnancy-related accommodation.”

And Black and Indigenous women are forced out of work because of pregnancy more often than white counterparts, Ms. Kelley said, contributing to long-term race and gender wage gaps. “No family should be deprived of their economic security because of a temporary and reasonable accommodation” for pregnancy.

In their Labor Day letter from this year, U.S. bishops agreed. “No woman should be forced to risk her or her child’s health, miscarriage, preterm birth, economic security or losing insurance benefits just because she requests a short-term, reasonable, pregnancy-related accommodation,” they said. In their first Labor Day statement since the Dobbs decision, the bishops’ said that while Roe v. Wade has been overturned, there is still more work to be done to “build a society in which abortion is unthinkable.”

The P.W.F.A. would be especially important to people who are at greater risk during pregnancy, such as those with chronic illnesses like diabetes or high blood pressure and those who have had pregnancy complications before. The American College of Obstetricians and Gynecologists published a set of recommendations based on case studies for pregnant workers and employers. A study from Denmark “showed elevated risk of miscarriage associated with extensive lifting.” The P.W.F.A. could eliminate these preventable miscarriages.

“It is a common sense, pro-worker, pro-family measure that has more urgency in a post-Dobbs landscape and should have broader support,” Ms. Alexander said. “Our country has so much work to do to ensure we live in a society where people can thrive as pregnant workers, reduce maternal mortality rates and ensure families can support their children with living wages.”

“Pregnant workers and their families deserve support in the workplace. The P.W.F.A. is a necessary piece of creating a society that actively cares about women and families,” Ms. Kelley concluded.